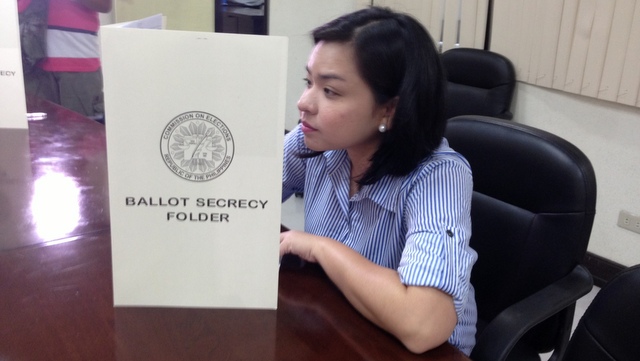 MANILA, Philippines - For the first time, members of the Philippine media are allowed this year to vote before the regular May 13 election day.

Some 55 media practitioners cast their votes on Sunday, April 28, the first day of local absentee voting (LAV) that will run until Tuesday, April 30.

Members of the media were qualified for LAV after the Commission on Elections (Comelec) approved in October the petition of a group of journalists, represented by lawyer Romulo Macalintal, asking to include them and their colleagues among the early voters.

Comelec resolution No. 9637 specified that voting for local absentee voters would be manual; meaning, they would have to write the names of candidates in a ballot, then drop the ballot in the yellow metal ballot box.

Lia Mañalac, a reporter at GMA-7, admitted she was "wary" that the voting was done manually. "Bakit naka-envelope, bakit hindi PCOS? (Why was it placed inside an envelope? Why was there no Precinct Count Optical Scan (PCOS) machine?" she asked. "Hindi kaya prone to dayaan? (Wouldn't it be prone to cheating?)" 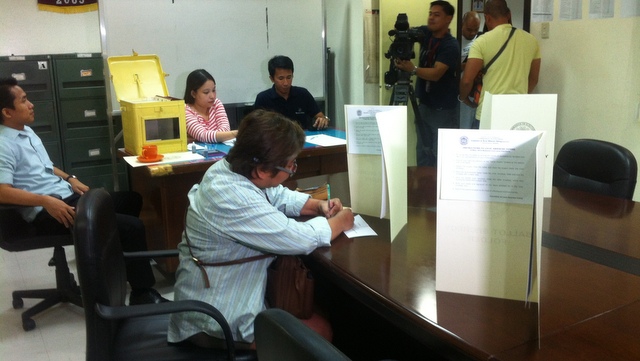 Inday Varona of the National Union of the Journalists of the Philippines fills out her ballot. Photo by Rappler/Purple S. Romero

Inday Varona of the National Union of the Journalists of the Philippines also raised the same question. "Why was there no PCOS machine? Maybe all have been deployed already."

Since March, Comelec has deployed 77,829 PCOS machines to 80 provinces.

"If there are 300 (voters) maybe it's acceptable that there's none if it's staggered. But next time they institute it, more journalists can vote, then maybe we get our own PCOS machine," Varona said.

Jam Sisante, another reporter at GMA-7, said she was not concerned that the voting was done manually as she knew that Comelec had a contingency plan.

Comelec Chairman Sixto Brillantes Jr said that LAV is really done manually. Aside from the media, teachers and members of the Philippine National Police and the Armed Forces of the Philippines will also cast their votes ahead of the May 13 elections.

All ballots from the 3-day LAV will be consolidated and counted on May 13. 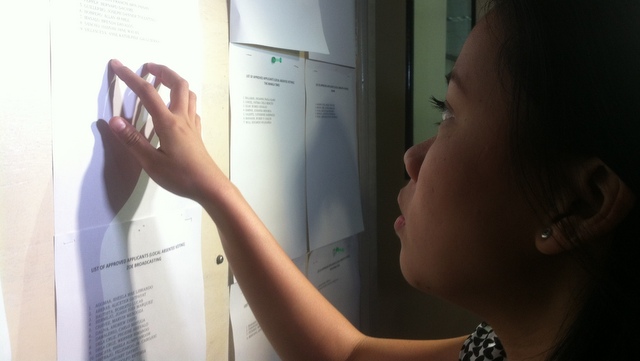 UNABLE TO VOTE. Mallillin of DZAR failed to cast her vote because she wasn't in the voters' list. Photo by Rappler/Purple S. Romero

Meanwhile, one of those who went to vote on April 28 failed to do so because her name was not on the voters' list.

Jo-ann Mallillin of SMNI DZAR Sunshine Radio 1026 was not able to vote because her name was not on the list of local absentee voters. Board of election inspector (BEI) Joy Reyes said it was likely that Mallillin's application was not done under oath, or her registration was deactivated.

Comelec resolution No. 9637 states other reasons for the disapproval of application:

Mallillin, who registered only in 2009, said she was able to vote in the 2010 presidential elections.

Members of the media who failed to register for LAV could still vote on May 13. In the case of Mallillin, if her registration was deactivated (this happens if the voter failed to vote in two elections consecutively), she would not be able to vote at all this year.

Varona said more members of media should take the opportunity to vote ahead of election day. "Next time, we should all vote. How many are we in media? 10,000? 10,000 very opinionated people," she said. - Rappler.com