And the most memorable and effective political ads are... 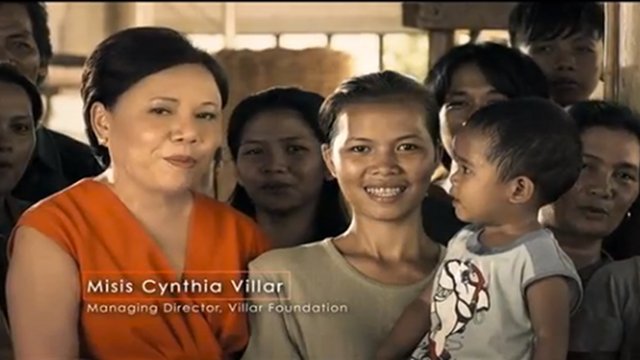 "'Hanepbuhay' has high recall. Remember, she had been running her ads before the elections, when there was still no limit. And it is constantly reinforced," Tabunda said in a phone interview. (READ: What makes a winning political ad?)

She said she can't share the the percentages of recall until they have finished briefing their clients.

The "Hanepbuhay" ad series seeks to promote Villar's advocacy to provide jobs to Filipinos as she has supposedly done in Las Piñas -- where she, her husband Senator Manny Villar, and son Rep Mark Villar all served as district representative. Villar also registered "Hanepbuhay" as her nickname in the ballot.

But the political ad that appears to be most effective is Grace Poe's, said Tabunda.

"The awareness of the ad is surprising. It has a very high recall. It's behind Cynthia Villar in the survey," she said.

Poe's ads play on her surname, which sounds like a term of respect in the Filipino language. The humor must have worked, said Tabunda. She recalled popular ads by 2007 senatorial candidate Prospero Pichay. It also played on his surname which sounds like a local vegetable. Pichay's ads topped recall of voters during that elections.

The question was a rider in the latest Pulse Asia senatorial preferences survey, which was conducted from April 20 to April 22.

Television advertisements are voters' biggest source of information and news about senatorial candidates for the coming May 2013 elections, according to a new Pulse Asia survey obtained by Rappler.

How to explain Koko's fall

The biggest loser in the latest senatorial preference survey is re-electionist Sen Aquilino "Koko" Pimentel III, who lost 9 percentage points since the last survey in March.

The senator quickly dismissed the Pulse Asia survey because "nothing major" happened to explain the decline.

"Let the scientists behind the survey debate themselves. It's supposed to be a science. One conclusion is it's not yet a science in the Philippines. It's the conclusion," he said.

"I treat surveys as guide. We are not like bamboo that we react to each and every survey, where the wind is blowing. The best policy is to average," he added.

Around the time of the survey, Pimentel told the media about a supposed smear campaign against him in Mindanao.

Pimentel said: "We analyzed a regional survey, and that is what we saw. I had double-digit losses in four regions. I am having this investigated because I can't recall any blunder that I might have committed. There must be sustained and well organized negative campaign conducted against me here in Mindanao," Pimentel told reporters on the sidelines of Team PNoy's April 23 sortie in Cagayan De Oro.

Reminded about it, Pimentel said further investigation showed that there was no threat of a smear campaign.

Pimentel has earlier cut his subscription to Pulse Asia. He said he depends on internal surveys by Team PNoy.

The recall of his ads may offer some explanation, said Tabunda. She said Pimentel's ads ranked 17th in terms of recall and it's a single digit rating. - Rappler.com