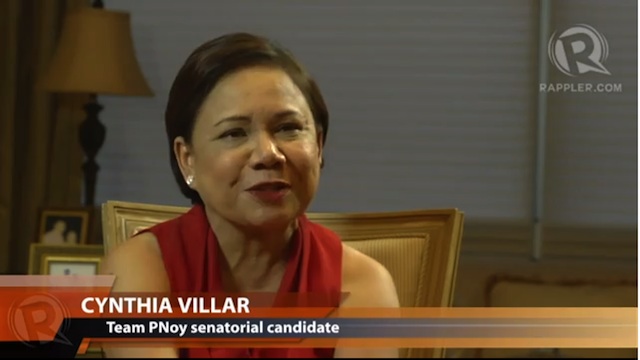 MANILA, Philippines - Team PNoy senatorial bet Cynthia Villar is the other half of outgoing Sen Manny Villar. They have been married for 37 years.

Yet Villar has waged her battle for a senatorial seat seemingly on her own. Although her husband is the more experienced politician, he has been been practically invisible from the campaign trail.

It's a decision they made early on in the campaign, Villar says. Her husband has only been involved in the backroom details of her campaign -- talking to advertisement agencies and analyzing her strategies.

"But he's not campaigning for me physically, it's more of helping me through his brains," she says.

The couple has remained true to their strategy throughout the campaign period. When the Philippine Center for Investigative Journalism released a report revealing that Manny Villar owns an offshore account that was not reflected in his statement of assets, liabilities and net worth, the senator only released a statement and refused to grant any on-cam interview.

Instead, it was Cynthia Villar who faced the media during campaign sorties with Team PNoy. She labelled the report -- the result of a 15-month research of about 2.5 million files by a investigative journalists from 46 countries -- as black propaganda.

In a past interview with the now-defunct television show Probe Profiles, Manny described his wife as his "partner in all things."

Villar says she didn't want to enter politics at first but thought she could do better if there was "continuity."

Despite her initial misgivings, Villar is not just the wife on the sidelines or the proverbial woman behind the man. She's the other half of a political duo.

When Manny finished his 3rd term in the House of Representatives in 2001, Cynthia took over his spot and ran as Las Piñas representative. Her husband, in turn, ran for the Senate.

Now that Manny is about to finish his 3rd term as senator following his defeat in the 2010 presidential elections, Cynthia is once again running for a position her husband will leave behind.

Of the couple, it is Sen Manny Villar who first entered politics when he was elected as Las Piñas representative in 1992.

But it is Cynthia Villar who comes from a political family. She belongs to the Aguilar political dynasty in Las Piñas, which has ruled the city for over 3 decades. Her father, the late Dr Filemon Aguilar, was mayor of Las Piñas for 22 years and congressman for 5 years while her brother, Vergel "Nene" Aguilar, is seeking reelection as Las Piñas mayor. He has held the position for 5 terms. Her son, Mark Villar, is also seeking reelection as representative of the lone district of Las Piñas. (Check out her stand on various issues here)

Asked why she chose to follow in the footsteps of her husband in running for a national position rather than going local, Villar says, "It's not what we've grown accustomed to, maybe." Besides, she says, "someone else is doing that."

At a Makabayan proclamation rally in November 2012, Villar declared how they have managed to be together for over 3 decades. She says that even if she does not have the looks of a beauty queen, she has always stood by her husband.

"I tell them that the reason is when we were poor and were making it in this world, I was there to help him," she says. "Kaya ang aking laging sinasabi sa ating mga kababaihan tulungan nyo sa pagtatrabaho ang inyong asawa para mahalin kayo nang habambuhay," she adds. (I always tell women to help their husbands so that they would be loved in return.)

Villar is no stranger to hard times.

In 2010, her husband lost a well-oiled bid for the presidency, placing third only to President Benigno Aquino III. It was a campaign mired in controversy. Aside from being accused of falsifying his rags-to-riches story, Villar faced allegations of corruption and questions regarding his supposed ties to then President Gloria Macapagal-Arroyo.

In a earlier interview with Rappler, Manny says the biggest loss he had to suffer in 2010 was the damage to his reputation.

Fast-forward to 2013, Mrs Villar says they have moved on. In fact, the Nacionalista Party (NP) forged a coalition with the administration's Liberal Party and the Nationalist People's Coalition to form Team PNoy.

"I don't consider them enemies anymore," she says. " We have moved on and we have forgotten about that. I have gone with them and it's okay."

It may not have appeared so in 2010 but Villar says her husband and Aquino are close.

When Aquino was representative of Tarlac from 1998 to 2007, he served at a time when Manny Villar was Speaker and then when Cynthia Villar replaced him as Las Piñas representative.

"I think he was not the one who managed the campaign. Pero ganon talaga yun," she says when asked to comment on the dirty tricks played against the Villar camp in 2010 ostensibly by the Aquino camp. "It's politics. We just have to accept it. We cannot continue blaming everybody," she says.

Villar says she became a mother figure to Aquino when she served as president of the Congressional Spouses when her husband was Speaker. "Noynoy didn't have a congressional spouse pero may mga dealings din ako," she says. "Nakakausap ko yung mga girlfriends niya. That's part of your job. Even if there's no spouse, there's a girlfriend."

Asked to reveal who the girls were, Villar quips, ""Hindi ko na nga matandaan. Parang marami." (I can't seem to remember. I think he had many.) I dealt with them. Some of them I met along the way. They introduced themselves as girlfriends of Noynoy. Of course as the wife of the Speaker, I took care of the girlfriend of Noynoy," she added.

At the start of the elections, there were rumors that Villar at first did not want to coalesce with the LP, which Villar denies.

She reveals that NP was building a slate that would have included Camarines Sur Gov L-Ray Villafuerte, former executive secretary Ronaldo Zamora, Cavite Rep Jesus Crispin "Boying" Remulla and Bayan Muna Rep Teddy Casiño. "There were NP's who were going to run... but they decided to go back to local," she says.

In the end, it was only Villar and senators Alan Cayetano and Sonny Trillanes who decided to go for it.

Why did she run in the first place?

"I did not intend to run for senator but so many Nacionalistas planned [to run]. What happened was they all changed their minds and moved to local positions and it's only me who's left and I was asked to run and it's not a bad thing naman, if you feel that you can do something for the country," she says.

"[It's] for my party and I felt also that I can do my advocacy better with a national position kasi mas they will listen to you, you have more influence, more impact. So I thought that both ways it can be [good]," she adds.

Villar's candidacy only represents NP's effective strategy for political survival in their over a century of existence: to cooperate and work hand in hand with the party in power.

And she's bent on winning the race.

Villar is frank and candid. Asked about her campaign and media strategy early on in the campaign, she admits her social media accounts are being handled by someone else because she's not "techie."

Villar says her husband also gives her tips on how to handle the media.

She does skip a beat when asked about a sensitive issue involving the media -- corruption.

Asked about how she handles members of the media who ask for money, Villar says, "Di naman sila nanghuhuthot sa akin. Maybe hindi sa akin," she says. (They don't ask from me. Maybe it's not me they ask from).

Although her husband is the media expert, Villar says he can never advise her about networking. "Mas marunong yata ako ng networking sa kanya," she says.

This is the same candidness that led to the biggest controversy in her senatorial run.

In a senatorial forum on GMA News TV on February 23, economist Solita Monsod asked Villar to explain why, as chairperson of the House committee on high education, she opposed the move to close nursing schools that the Commission on Higher Education (CHED) said did not have access to tertiary hospitals required by law. She was given 60 seconds to answer the question.

Villar said she only wanted CHED to keep pre-nursing schools open since training from tertiary hospitals would only be required on the 3rd year.

The response earned the ire of nurses, nursing students and other Filipinos, who believed that Villar did not only demeaned the nursing profession but was also protecting the business interest of schools.

Villar has since apologized. She says she did not mean to malign the nursing profession. According to her, it was a "complicated question" that she only had 60 seconds to answer.

The controversy produced memes that went viral on the Internet and continue to be distributed among the electorate. (Check social media sentiment on Villar here)

Amid the controversy, Villar managed to retain a comfortable standing in surveys since December 2012. She has consistently been included in the magic 12 of survey firms, enjoying percentage points of between 37.7 and 53, ranking between 3rd place to 9th place.

Like her husband (Remember "Sipag at Tiyaga"?), Villar has taken the strategy of utilizing the power of political advertisements for her candidacy.

She was one of the senators who bombarded TV and radio with advertisements before the official campaign period began, when the limit for the advertisements had yet to be implemented.

Pulse Asia has judged Villar's "Mrs Hanepbuhay ads, which promotes her advocacy of providing livelihood for Filipinos, as the ad with the highest recall for this elections.

"Hanepbuhay' has high recall. Remember, she had been running her ads before the elections, when there was still no limit. And it is constantly reinforced," Pulse Asia chief research fellow Ana Tabunda says.

Her husband's previous political advertisements recounting his rags-to-riches story turned controversial in 2010, when his opponents questioned whether the presidential candidate was indeed "tunay na mahirap" (genuine poor). This time around, how authentic is Villar's "Mrs Hanepbuhay" persona?

Villar is the managing director of the Villar Foundation, a non-profit organization that offers multisectoral projects, including programs on livelihood, health, environmental, youth, religious sectors and the arts. In Congress, she co-authored laws on anti-trafficking, violence against women and children, the Expanded Senior Citizens Act of 2003, the Magna Carta of Women and the Comprehensive Senior Citizens Act, among others.

But what would Mrs Hanepbuhay do if she loses in the elections? It's probably a remoe thought at this point. If surveys are to be believed, Villar is likely to win a Senate seat. And that's when she will have to further prove that she isn't simply her husband's shadow.

Will you vote for her? - Rappler.com