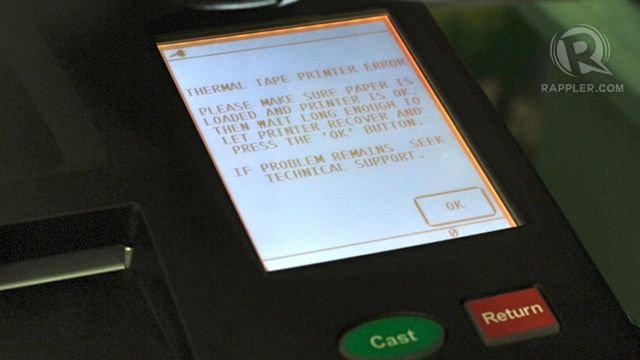 NOT WORKING. A week before the May 13 elections, a number of PCOS machines are still not working properly. RAPPLER/Karlos Manlupig

DAVAO CITY, Philippines - Board of election inspectors who experienced difficulties operating precinct count optical scan (PCOS) machines during the final testing and sealing (FTS) on Monday, May 6, must be questioned, a city election officer suggested.

"It's either they are forgetful or they are stupid," said Atty. Aimee Perolino-Ampoloquio, Davao City election officer. She explained that the BEIs were given proper training (including refresher courses) to ensure that they are fully capable of facilitating the elections.

"That is why we train them and they are given PCOS technicians. They must already be self-reliant," Ampoloquio said.

In Matina Central Elementary School, testing commenced late (around 10:30am) because the teachers serving in the elections encountered problems with their machines. A PCOS machine failed to initialize as it encountered an error with its compact flash memory card.

Another machine from the same school also failed to print an initial printout indicating zero votes.

A teacher reported that a machine in her precinct suddenly switched off after an error caused by its thermal printer. "We were about to print the test election results when it shut down," the teacher said.

Ilagan, who used to teach at the Ateneo de Davao University, explained that if the technical issues were not covered by the trainings, then the teachers serving would have a hard time addressing them.

"Comelec is just looking for a scapegoat. No matter how many seminars the teachers undergo, if new, unexpected problems crop up, then the teachers would not know how to address these problems," Ilagan said. "Why blame the teachers if Comelec has not covered all these possibilities?"

Redemptor Banayo, PCOS technician assigned at the school, explained that it is "normal" for the machines to shut down after experiencing thermal printer issues. "In fact, during our training, our machines shut down repeatedly. I think this is understandable because these machines were stored and unused for years," he said.

Banayo said there were also instances where the machine's application froze while being used. 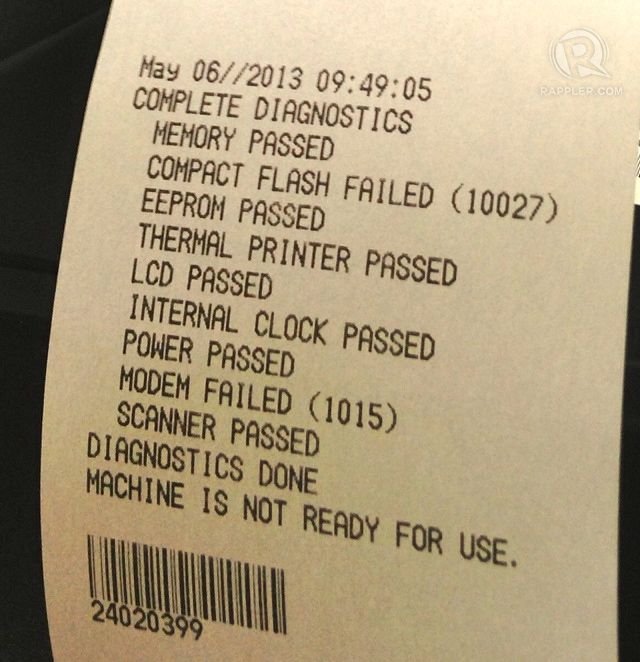 FAILED. A number of PCOS machines are not ready for use. RAPPLER/Karlos Manlupig

University of the Philippines-Mindanao professor Aya Ragragio, convener of Kontra Daya - Mindanao, expressed alarm over the number of problems monitored.

“We regret that the poor outcome of the FTS would reflect the outcome of the actual polls, which could lead to election failure,” said Ragragio. "Our field monitors reported cases of PCOS machines unexpectedly shutting down, machines accepting wrongly-shaded ballots, memory cards that are not detected, and PCOS keys that are not functioning.”

Kontra Daya also warned state security forces not to go near the polling precincts as there have been a number of them monitored within the restricted area in Davao City's 3rd district.

With these reported hiccups, Kontra Daya is seeking international support to ensure the sanctity of the elections.

“We are preparing to seek UN’s help in ensuring that the automated election system would not compromise the voters’ rights. We enjoin everyone to establish a good government that is responsive of our welfare by guarding our votes. We cannot trust the Comelec to do this for us. Let us rise and be vigilant,” said Agrario.

Ampoloquio said the glitches were only in 5% to 10% of the total machines in the city. She said machines that require repair would be sent back to their central office. "But we have already prepared contingency plans if ever the machines will not be repaired," Ampoloquio said.

However, she refused to divulge what these contingency plans are. "Generally, we are already prepared for the elections," she said.

The teachers said they are hoping these glitches would not cause major problems on May 13. But with the previous problems encountered during election day, teachers are now forced to innovate.

To make the elections smoother in her precinct, Raquel Payor, a grade two teacher from the same school, said that they would distribute forms indicating the name, precinct number, and sequence number of the voter.

"This would come from our own pockets, but this would help us make things easier for everyone," Payor said. - Rappler.com