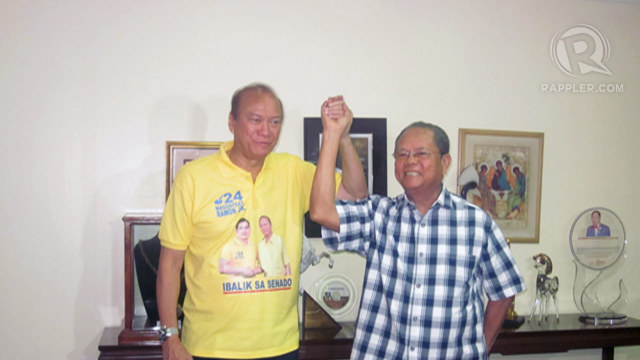 MANILA, Philippines – The Catholic charismatic El Shaddai Movement completed on Tuesday, May 7, the list of senatorial candidates it is endorsing by picking Ramon Magsaysay Jr. and Bam Aquino, both from the administration's Team PNoy.

The religious leader also expressed his admiration for the candidate’s father, saying he idolizes the late President Ramon Magsaysay.

Magsaysay Jr. accepted the endorsement, saying it will be a big boost to his campaign.

“As he endorsed Bam Aquino and myself, it’s a very significant strength added to our legions of supporters all over the country,” Magsaysay said.

El Shaddai is the lead group in the White Vote movement, which has endorsed senatorial bets who, to them, are pro-life and pro-family. The movement earlier named 10 candidates who opposed the reproductive health bill.

The selection was determined based on a set of standards called LASER or lifestyle, action, supporters, election activities, and reputation.

According to Velarde, the decision on who completes the list was agreed upon by the movement.

"Kasi may sampu na na-endorse ang White Vote movement. Dumaan sa proseso iyon. May agreement kami na kapag may kulang, pwede ako magdagdag with their clearance (The White Vote movement has already endorsed 10 candidates and they all underwent a process. There’s an agreement among us that I can fill in the remaining slots if the need arises.),” Velarde said.

When asked if he’s nervous with only one week to go before May 13, Magsaysay stood firm on his reason why he’s running.