Estrada: Take 'Lim's money' but vote for me 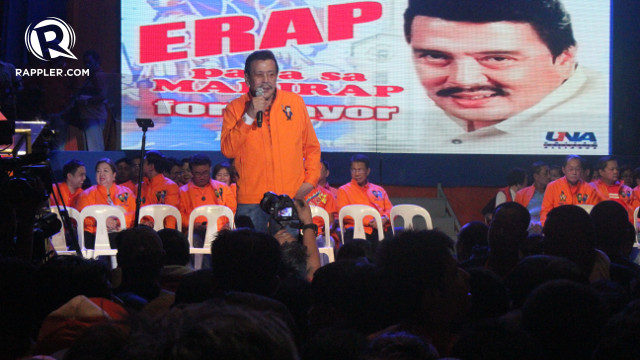 ACCEPT MONEY BUT DON'T SELL YOUR VOTE. Former President Joseph Estrada urges voters in Manila to accept money from his political rivals but vote for him instead. Rappler/Ervin Aroc

Estrada denied being behind posters that accused Lim of buying votes. He also renounced Lim's allegations that the stoning incident in their caucus and the mauling of supporters outside his house in Sta. Mesa were self-inflicted.

"Paanong magkakamali? Si Bishop Tobias, ang simbahan, humingi ng tawad. (How would I have sinned to the people? Bishop Tobias, the Church - they asked for my forgiveness)," he said.

Veloso earlier told Rappler that public governance was not about looks.

No plans of losing

"I have been harassed several times - the disqualification cases, the stoning incident in our rally. But I've always forgiven them," he said.

Asked what would be his next step be if he loses the local polls, Estrada replied with a grin, "Wala akong planong matalo (I have no plans of losing)."

During his miting de avance at Plaza Morga, Estrada reiterated that he was wronged when the country's elite connived to remove him as President in 2001. Let the mayoral seat in the nation's capital be his last chance to redeem himself to the poor who believes in him, he said. - Rappler.com