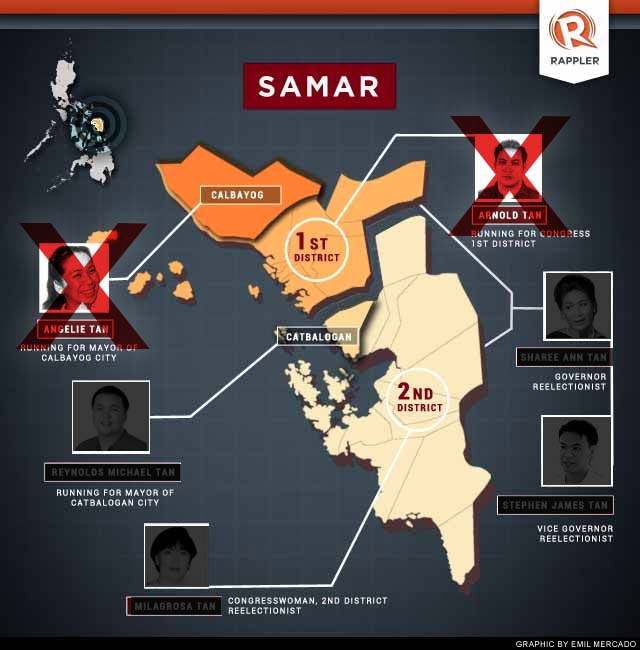 CALBAYOG CITY, Philippines - Coming on the heels of a local court ruling that declared two of the Tan dynasty members as non-bona fide voters of their election areas, the Commission on Elections (Comelec) en banc denied due course to their Certificates of Candidacy (CoCs) in a resolution released Friday, May 10.

The Comelec decided on the issue "motu propio," or on its own initiative, denying the candidacy of both Tans without a complaint filed in their office but with sufficient evidence from the RTC.

Angelie Tan filed her CoC for the mayoral position in Calbayog City and Arnold Vasquez Tan filed his CoC for 1st District Representative of Samar.

Both Tans failed to comply with the qualifications stated in Section 39 of the Local Government Code: “An elective local official must be a citizen of the Philippines; a registered voter in the Barangay, municipality, city, or province or, in the case of a member of the Sangguniang Panlalawigan, Sangguniang Panlungsod, or Sanggunian bayan, the district where he intends to be elected; a resident therein for at least one (1) year immediately preceding the day of the election; and able to read and write Filipino or any other local language or dialect.”

The election commission's resolution effectively cancels the Tans' CoCs, making all votes for Arnold and Angelie "stray votes" in the 2013 polls. 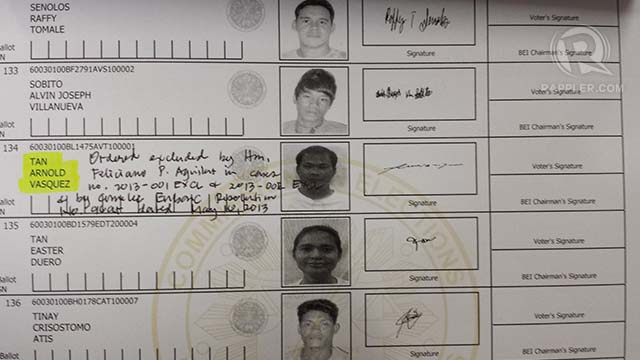 EXCLUDED. A photo of the official voters list. Contributed photo 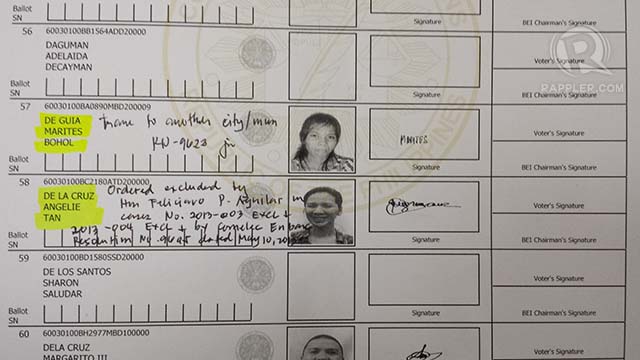 EXCLUDED. A photo of the official voters list. Contributed photo

Disqualification vs denial of CoCs

Unlike a disqualification order, the denial of CoCs disallows Arnold and Angelie from fielding substitute candidates.

“It is as though no candidacy was filed,” said a legal counsel, who refused to be named.

He further added that the Tans can potentially be liable regarding the material misrepresentation that occurred in their filing of candidacy.

The Tan camp has yet to reply to interview requests from Rappler.

Samar is divided in two districts, with over 400,000 voters. The Tan family has been in power in Samar for more than a decade now.

The district has 3 bets vying for the congressional seat including Tan. Calbayog, the only chartered city in Samar, has 3 candidates for the mayoral post including Angelie.

The exclusion case was decided RTC Branch 31 on Monday, May 6, shall be in effect unless the Tans file a temporary restraining order.

It was decided 10 days after a Petition for Exclusion was filed against Arnold Tan by one Carlito Senolos. The issue of residency was raised in the petition, with the court eventually declaring the candidate as a resident of the 2nd District.

During the hearings on the case, witnesses testified that they didn't see the Tan or their family in Barangay Cagnipa, their supposed residence for 2 years.

A certificate of the City Assessor also showed that the two candidates have no real property in Calbayog.

According to organizers of the Calbayog-based Tunay at Totoong Liberal (TUTOL) Party, petitioner Senolos is an ally of Sarmiento, Tan's rival.

A photo of the court decision was posted on the Facebook page of Sarmiento of the Liberal Party. – with reports from Rappler Ambassador Bonn Troy Boñola/Rappler.com

Below are the Comelec resolutions: