GENERAL SANTOS CITY, Philippines (UPATED) - The world fell apart for the Antoninos in General Santos after one of the biggest election upsets in local history saw the family's impregnable fortress crumble.

Re-electionist Mayor Darlene Antonino-Custodio was defeated by councilor Ronnel Rivera, who was proclaimed winner of the race on Tuesday, May 14.

According to the almost completed unofficial count as of 1.06 pm, Rivera had accumulated 78,184 votes compared to 66,914 from Custodio.

The challenger’s running mate, re-electionist vice mayor Shirlyn Bañas, also enjoyed for a landslide victory while the tally netted a 7-5 victory for Rivera’s slate in the 12-seat city council.

It was thought to be a close race. But a month before election day, Antonino patriarch Adelbert frantically began calling the shots, indicating that he expected an upset.

Darlene's father came out swinging in the last five days, appearing on local radio and TV to support his daughter.

Adelbert Antonino, a former congressman and mayor of General Santos City who "retired" from active politics in 2001 to allow his vice mayor Pedro Acharon Jr. to run as the incumbent against Rosalita Nuñez, another former mayor.

Acharon easily won over Nuñez, and Darlene was also elected by a wide margin as representative for the 1st district of General Santos City. Ironically, that time another Rivera, the eldest brother of Ronnel, lost to Darlene.

Not even the personal endorsements of President Benigno Aquino III, his celebrity sister Kris Aquino and even still popular former President Joseph Estrada failed to save the Antoninos, who had not lost a vote since 1995, from political doom. It is change -- Rivera's campaign theme -- that is now brewing.

Where did they fail?

The world fell apart for the Antoninos in this city. In one of the major election upsets in local history, the once impregnable Antonino fortress has crumbled.

Rivera’s running mate, re-electionist Shirlyn Bañas, is also headed for a landslide victory while the vote count also points to a 7-5 victory for Rivera’s slate in the 12-seat city council.

It was thought to be a close race. But 4 weeks before D-Day, the Antonino patriarch Adelbert frantically began calling the shots - indicating an upset.

Adelbert, father of Darlene, came out swinging in the last 5 days: heading to the elections, appearing on local news TV Brigada, and going live on air in Bombo Radyo Gensan.

The former congressman and mayor of General Santos City retired from politics in 2001 when he resigned as mayor, allowing then Vice Mayor Pedro Acharon Jr to campaign as the incumbent against another former mayor Rosalita Nuñez. Acharon handily won over Nuñez. So did Antonino's daughter, Darlene, as congresswoman representing the first district of General Santos City.

Ironically, it was another Rivera, the eldest brother of Ronnel, who lost to Darlene.

Where did they fail?

For more than two decades, the Antonino-founded Achievement with Integrity Movement (AIM) was a powerful political platform, able to dominate local elections, leaving only one or two seats for the oppodition in each municipal council, to create a semblance of democracy.

But the real driving force behind AIM, is Adelbert, described by a political analyst as a shrewd and cunning operator.

Unfortunately for the dynasty, Antonino’s tight grip – some claim even dictatorial – over AIM may have also slowly caused their fall from power.

The first crack in the political family's power structure emerged in 2010, when former ally and then outgoing vice mayor Florentina Congson defied the Antoninos and ran for mayor against Darlene. Another popular candidate, then outgoing councilor Ramon Milleza, also snubbed the clan and decided to battle Acharon for a seat in Congress that same year.

To make things even worse, Loreto Acharon, the younger brother of the congressman, also ran for mayor, and that alienated the Jugarap side of the Acharon’s Kaliwat family.

Congson and Milleza, former members of AIM, both lost along with Nuñez to Darlene, but the Antonino patriarch's ailing health and authoritarian ways had made him lose key allies who felt they have been dictated to long enough in General Santos, where it is an open secret that no annual budget is approved by the city council without going first through Aquarius, the Antonino resdidence.

Another former AIM member, Vice Mayor Shirlyn Bañas, also bolted the party in 2007 to run for mayor after topping the 2004 elections for city councilors. She lost but made a comeback in 2010 by winning as vice mayor.

Bañas, Milleza and Congson became living witnesses to Adelbert’s folly for power: Rivera agreed to subject himself to an AIM selection process when he first ran in for city countil 2010. When it was clear that he would not be picked, he joined the race as an independent, and not only won, but topped the election. 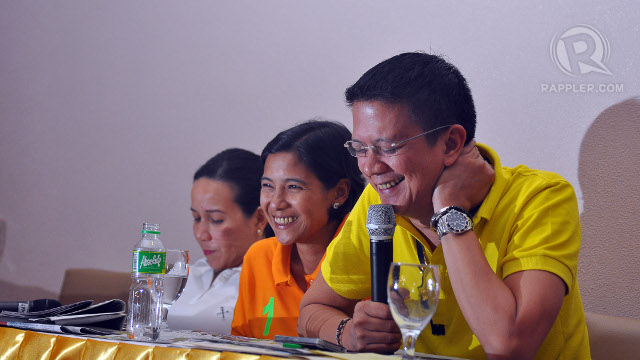 Familiarity, they say, breeds contempt. One may also say overstaying one’s welcome is a recipe for disaster.

Indeed, the Antoninos may have overly felt they were unbeatable ever since Adelbert learnt his lesson when he lost to Nuñez in 1995. From then onward until 2013, the clan never faced a serious challenge to their power throne.

For almost two decades the family enjoyed loyal leaders and wards as part of a political machinery envied by every politician in the region. They marginalized the fractured and headless opposition, and belittled its capacity to rally and unite behind a single leadership. And they underestimated the combined financial strength of Riveras and political clout of Rep Manny Pacquiao, who made a political compact.

They insisted they would maintain their grip on power even if they were enemies of at least three past presidents.

Adelbert bragged about that on TV. Until Aquino was elected in 2010, the Antoninos were only friends with Malacañang during Estrada’s time, and even that was a short-lived affair after his early departure.

Forced into the corner when it was clear they were about to lose, Adelbert said the city will be better off with the President's support.

But by then it was already too late. People had already began to first whisper and then openly argue, it's time for change.

One of the major blows to the Antoninos' reign in the city were the pestering power outages. Although these were more prolonged leading up to the 2010 elections, the perceived failure of the dynasty to anticipate and address their recurrence during election time this year ignited the powder keg, which eventually exploded when they misread and mishandled the issue.

As late as February, she was still claiming the National Power Corporation was not using an excess of 65 megawatts, and before she joined MinDA accused the government of creating an artificial shortfall to pave the way for more coal-fired plants to be built on the island.

While the power problem in Mindanao is a matter of supply shortage, it hurt the Antoninos even more when they pointed fingers and blamed Socoteco 2, the local electric cooperative.

When that didn’t work, they tried to introduce interim and stop-gap measures like changing their mind over the construction of a 200MW coal-fired power plant by the Alcantara business family in Maasin, Sarangani. But by then, the damage had become irreversible.

The Antoninos have never warmed up to the local media.

They divided journalists into camps loyal to either their... or the other side. They failed to reach out and open up to reporters, and relied on their much-touted accomplishments to justify their hold on power.

But the media little by little started reflecting the mood for change, and journalists transferred in droves to the opposition's side.

When it was crunch time and the Antoninos needed help from reporters, they were left like the boy who cried wolf. They had to pay for expensive air time and launch negative ads to arrest Darlene’s freefall from political power.

But that also came a little bit too late, too.

It will be a long and hard reflection as the Antoninos head to rainy days after a very long disastrous summer heat.

Only time will tell if they will be able to bounce back like they did in 1995. But the situation may no longer be similar and in their favor three years from now.

For the first time, they are actually out of power, with only Rep Acharon left to carry on the torch. He will have to fend off future challenge and do it alone after barely sneaking past Rogelio Pacquiao.

It will take Rivera committing the same mistake as the Antoninos for the latter to make another comeback in three years.

The 2013 election taught us the lesson that when the high and mighty fall out of political grace, it is like Olympus has fallen. - Rappler.com