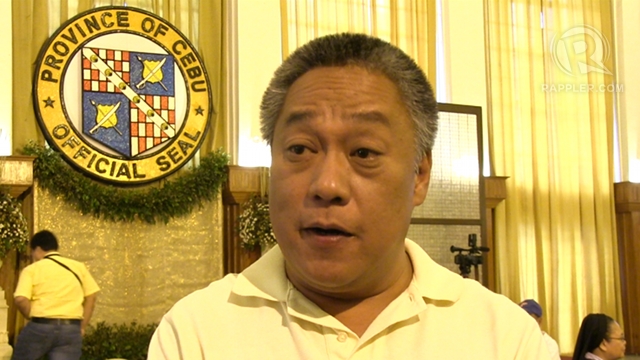 In an interview Tuesday, Davide told Rappler he hopes the trend will be reflected in the final results.

Davide, who campaigned on a platform for change, said the results are a vote against the Garcia dynasty.

Pablo John is the brother of suspended Gov Gwendolyn “Gwen” Garcia and the youngest son of Deputy Speaker Pablo “Pabling” Garcia. Pabling and Gwen led the province as governor for a total of 18 years.

Davide had vowed to hold Gwen Garcia accountable for alleged graft and wasteful spending during the 3 terms that she ran the capitol.

He was among those who sued Gwen Garcia for graft over the backfilling of the Balili estate, a property the provincial government bought in 2008 for P98.9 million but the Ombudsman found to be largely underwater. It is the subject of a graft case before the Sandiganbayan.

If proclaimed governor, the son of former Chief Justice Hilario Davide Jr said he will make good on his promised reforms in the province.

“Cebuanos can look forward to a new provincial government, in which I intend to promote a culture of transparency and accountability. Cebuanos can expect that.”

The lawyer and former Cebu City councilor lost to Gwen Garcia in 2010 by 96,341 votes. Davide explained the reversal.

“I’m better prepared now in the 2013 elections and our party gained strength. We recruited so many people and our campaign went well. And of course, the President was there to endorse us and that really carried a lot of weight,” said the LP provincial chairman for Cebu.

In a press briefing in Manila on Tuesday, LP president-on-leave Mar Roxas also welcomed Davide’s lead as a sign that Cebuanos want change.

Davide said he hopes the Garcia camp will no longer question the results.

“As far as the race for the governorship and vice governorship is concerned, I think it’s clear. The lead is big so I don’t think they will attempt to prevent any proclamation. I hope they don’t. They’re supposed to be a family of laywers so they should observe the rule of law if it’s clear already.”

Davide’s running mate, Acting Gov Agnes Magpale, is also leading in the vice gubernatorial race with 469,785 votes as of 6:15 pm. Independent candidate Glenn Soco is behind Magpale with 327,734 votes. Garcia’s running mate, Boboy Durano, is at third place with only 153,784 votes.

Like Pablo John, his father Pabling is also behind in partial, unofficial results. The re-electionist congressman of the second district is trailing LP’s Willy Caminero who got 78,118 votes as of 6:15 pm. Pabling Garcia had 71,073 votes.

Unlike her father and brother, Gwen Garcia is leading the congressional race in the third district. In partial, unofficial results as of 6:15 pm, Gwen got 89,749 votes against LP’s Geraldine Yapha with 85,596 votes.

Cebu has 2.5 million voters, including Cebu City, Lapu-Lapu City and highly-urbanized cities. It is the country’s most vote-rich province.

The PBOC suspended the canvassing anew to Wednesday, with only 33 out of 51 municipalities and cities transmitting data to the province as of 5pm. The board said this constitutes about 62.74% of the total votes.

In a press briefing, the PBOC explained that the canvassing is delayed because defective compact flash (CF) cards in 15 municipalities will first have to be replaced.

The replacements will come from Manila and will have to be sent to some far-flung towns like Santa Fe, taking at least 4 hours.

“The replacements might arrive tonight or first flight tomorrow so once the CF cards arrive, they will be distributed immediately to the different concerned precincts and it will be shown to the public that the replacement cards do not contain anything,” said Eddie Aba, Cebu provincial election supervisor.

Aba said that the municipal board of canvassers (MBOC) cannot transmit results to the province until all the precincts have sent their data to the municipality.

“If the MBOC does not complete all the precincts, it cannot transmit results to us, unless there is an order from the Comelec to lower the [canvassing] threshold but as of this time, there is no order,” he added.

Aba said that the PBOC cannot release any of the official results until 47 to 48 municipalities and cities have transmitted their results.

With the delay, the PBOC expects to proclaim the winners in the provincial races on Wednesday evening yet. – Rappler.com