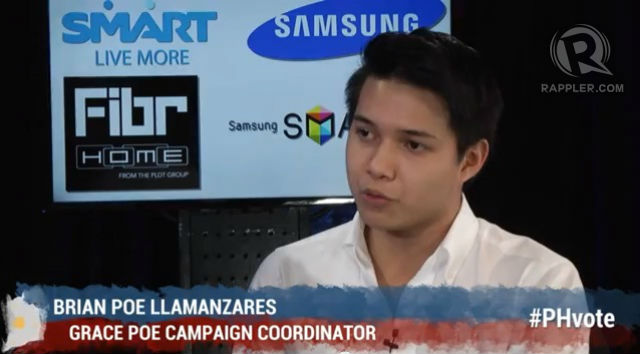 Brian, son of senatorial frontrunner Grace Poe-Llamanzares, served as campaign manager for his mother. In an interview at the Rappler studio with Rappler's Maria Ressa on Tuesday, May 14, he said he had picked up a lot of lessons on campaigning and politics in the Philippines.

"You can have an amazing candidate, but if you don’t have stuff to back him up, nothing is going to happen," he said.

The secret to his mom's success? Brian thinks its "in the name, messaging, and ads."

"Filipino voters are evolving. They still look at the name, but they look beyond that too. But a name not developed is nothing at all. Most people knew FPJ, they knew Grace Poe, but they didnt know what she looked like," he stressed.

Besides serving as his mother’s campaign manager, Brian occasionally subbed for his mother in interviews and appearances, including this online debate with Rappler in April.

To develop awareness about his mother’s name and candidacy, Brian said she attended “as many debates as she could and did interviews to show that she’s not just a name" - which she did in Rappler's debate one month before election day. (See the social media communities from that debate here).

Brian is still surprised that his mother is leading the senatorial race. “My bet was that she’d come in at 8th. When she came in number one, we couldn’t believe it.”

He also spoke about the campaign's low points - when his mom thought of giving up.

Is politics in the horizon for the grandson of Philippine film legend Fernando Poe Jr.? “Maybe not politics." He said he would rather attend to the family's movie-related business. He could be referring to FPJ Productions, the family business that her mother came home to manage after his grandfather Fernando Poe Jr died.

Idealistic, athletic, and articulate, Brian, who earned a political science degree from the Ateneo de Manila University, doesn't keep quiet on the burning issues of the day.

In December 2011, he led the filing of one of 3 separate petitions asking former Supreme Court Chief Justice Renato Corona to inhibit himself from the deliberations of former President Gloria Macapagal-Arroyo’s pending cases in the high court.

At the Ateneo, he was an active student leader tackling issues such at the reproductive health bill, the Freedom of Information Bill and HIV awareness. According to this write-up, he was also a dean’s lister, captain of the debate team and was once a member of the Ateneo’s fencing team.