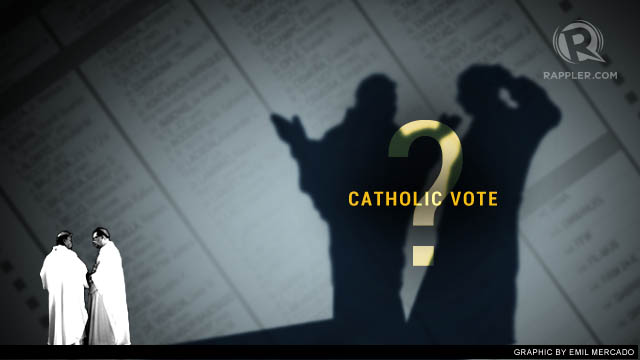 MANILA, Philippines - The Catholic vote is a myth, and this year’s national and local elections validated that.

Senatorial candidates, anointed by Catholic bishops and lay groups, are lagging behind other candidates based on partial and unofficial results.

To add insult to injury, those who were blacklisted by the Catholic Church for supporting the Reproductive Health law are faring well, jostling for the top slots in the Senate race.

In contrast, bets labeled as “Team Buhay" (Team Life) are trailing in the poll results.

In particular, the 3 Kapatiran bets the Lipa Archdiocese openly supported are at the bottom of the latest partial results.

Lipa Archbishop Ramon Arguelles, in a phone interview, admitted that creating the "Catholic vote" is still a pipe dream. “We are just starting to create a mindset for the Catholic voters,” he said.

He argued that “old politics” remained and many voters there still have to warm up to the idea of a principled vote. “From the beginning, the Catholic vote is weak. But we will not give up.”

The Lipa archdiocese is one of the most politically active dioceses in this elections, marshalling its lay leaders to hold house-to-house campaign to convince voters to reject supposed anti-life candidates and vote for the pro-life bets. In most churches and chapels here, political tarpaulins endorsing and rejecting certain candidates were displayed in and outside the church premises.

The Solidarity Vote Movement is a term adopted by certain dioceses to substitute for the "Catholic Vote." The phrase was used after some bishops expressed reservation in using the word “Catholic” in a partisan political exercise.

If it’s any consolation, some of the "pro-life" senatorial bets the Lipa and Malolos dioceses carried are performing well, although it is arguable whether this is a result of the Church’s endorsement. Re-electionist senators Gregorio Honasan, Antonio Trillanes IV, San Juan Rep JV Ejercito and former Las Piñas Rep Cynthia Villar appear headed for Senate seats, although the first two are still fighting it out for survival.

Batangas and Bulacan are two of the most vote-rich provinces in the country with a combined 3 million registered voters. Batangas and Bulacan are also two of the provinces where there is a high concentration of Catholics. In Batangas, for instance, 9 in 10 residents there are Catholics. The poor showing of the two dioceses' favored candidates, specifically the 3 Kapatiran bets, is enough proof that they failed to muster the Catholic vote.

Further proof of this is the ranking of supposed pro-life candidates in the Bacolod diocese in the province of Negros Occidental. The Bacolod diocese was the first diocese to display Team Buhay, Team Patay tarpaulins identifying the senatorial candidates who should be supported or rejected by the laity. Some dioceses followed the example of Bacolod diocese.

Occupying the last spots in the senatorial race there are the pro-life candidates.

In Cebu, where Catholicism is arguably most alive and where almost 9 in 10 residents belonged to the Catholic faith, “Team Patay” bets Cayetano, Legarda, Escudero, Angara all won, with Hontiveros within striking distance of the Magic 12.

Although Church leaders in Cebu are not as politically active compared to those in Batangas or Negros Occidental, the poor showing of Team Buhay bets spoke volumes on the influence and clout in the province of Cebu Archbishop Jose Palma. The prelate gave the go-signal for the lay group there, Live Initiative for Election 2013, to openly campaign for supposed pro-life senatorial bets.

Arguelles said the failure of the Catholic Church to unify and stand behind a common set of candidates spelled doom for the Catholic vote initiative. He was referring to the decision of dioceses to come up with their own individual set of candidates, based on the discernment of their respective lay groups.

“The different dioceses each has their own criteria. Some of the candidates endorsed by some dioceses do not match what we have. We are not united, “ Arguelles said.

Another indication of the failed Catholic vote is the failure of the vaunted El Shaddai vote failed to boost the chances of senatorial bets Ramon Magsaysay Jr and Mitos Magsaysay, both endorsed by Bro. Mike Velarde.

El Shaddai brags it has 8-10 million members, half of which are voters. With the exception of Bam Aquino, all of Velarde’s bets are nowhere in the top 5, although 6 of his bets have strong chances of breaking the top 12. Those who are occupying the top 5, including the pace-setting former censors chief Grace Llamanzares Poe, are not endorsed by Velarde. - Rappler.com