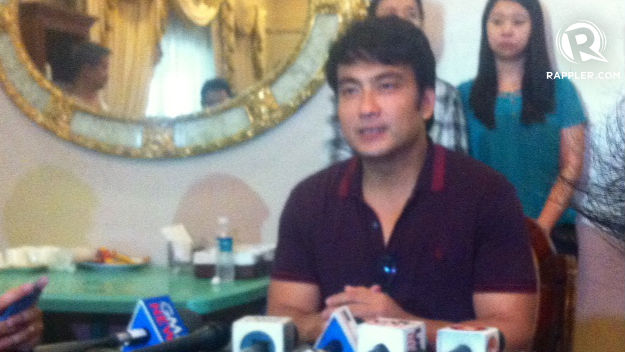 MANILA, Philippines - Three days after a stand-off between the police and armed men behind the residence of Sen Bong Revilla in Bacoor City, Cavite, provincial police said they received reports that 30 National Bureau of Investigation (NBI) officers were still hiding at the Revilla mansion.

Cavite Provincial Office spokesman Sr Supt Rommel Estolano told media, they are applying for a search warrant to look through the property. He clarified however they are not investigating Revilla, but are instead focusing on NBI members and searching for firearms.

"Until we have searched the house, the presumption is the armed men who ran and sought refuge in their house are still there," he said.

Police continue to surround the Revilla compound, an act Revilla has decried as harassment.

According to the lawyer of the Revillas, Salvador Panelo, he called the NBI for security.

"The NBI were here the eve of the elections. They came because I wrote them a formal letter asking for assistance because all my letters to police here in Cavite have been ignored. The intimidation of members of the police have become more regular and brazen," he said.

The provincial police director was assigned by the national government, bypassing the Local Government Code requirement that governors have the power to pick from a short list provided by the Philippine National Police and the interior department.

Panelo also denied there were any NBI officials hiding at the Revillas' home, "It's not true. I live at the house."

After the RPSB called for back up, Bacoor police and SWAT teams arrived and arrested 6 men, while some fled. Another 30 allegedly sought refuge in the Revilla house.

RPSB is headed by Glenn Dumlao, a former aide of Sen Panfilo Lacson, whose son lost to Jolo Revilla in the vice gubernatorial race.

But Panelo said the bikers were barangay tanods roaming the area to guard from vote buyers. He said only 6 NBI officers entered the Revilla home to tell them about what was happening outside.

Panelo also said the armed men were only the NBI officials, and that none of the bikers were armed.

NBI Cavite Chief Atty Ernos Mangutara confirmed to Rappler that he only deployed 12 officers to the area.

On Tuesday, May 14, police found 4 high-powered firearms in 3 vehicles parked outside the Revillas' house. At least one firearm did not have a Comelec permit for use during the gun ban. Mangutara said it belonged to a volunteer agent.

Despite the Revilla camp accusing Cavite police of harassment, Panelo said they would allow them to enter the Revillas' home if they come with a search warrant. Revilla accused provincial police as being biased against them, and said several heads of police in the province were formerly allied with Lacson. - Rappler.com