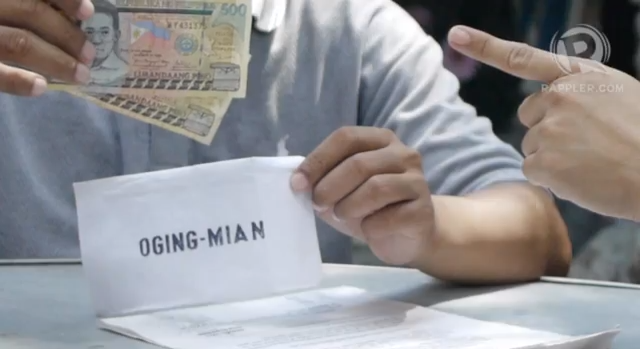 With over 300 incidents of election offenses, election watchdog Legal Network for Truthful Elections or LENTE says the midterm polls are worse than the 2010 elections.

Oging is Roger Mercado, the incumbent governor of Southern Leyte, a poor province with at least 254,000 voters.
Mian is Damian Mercado, the congressman of the lone district of the province.

The brothers are being accused of vote buying.

PO1 Hefner Doble, a cop in the town of Pintuyan, files an affidavit saying he received an envelope containing two P500-peso bills a few days before the elections.

Oging’s and Mian’s names are printed on the envelopes.

(Last May 8, I received an envelope from Pintuyan mayoral candidate Rustico Estrella. He said, I have something to make you happy from the congressman and from the governor.)

He claims they are Mian-Oging, since they are now running for each other’s posts. They cry political harassment, blaming opponents from the administration party.

(It's clearly fabricated. If it came from us, it should have read Mian-Oging. I am the congressman, Oging is governor. Does the governor come first?)

Their defeated rival, Marisa Lerias, denounces the entrenched practice of vote buying in her province.
Lerias also comes from a powerful clan that ruled the province since the eighties.

MARISA LERIAS, LOSING LP CANDIDATE FOR CONGRESS: To say it's rampant at this point is an understatement. It's part of the damaged culture that needs to be fixed…People say 'pahalipay', or momentary bliss which is the translation, when the effect is an eternity of grief.

Another witness, a barangay official, surfaces to support Leria's claim. She says a barangay captain who supported the National Unity Party of the Mercados ordered her to distribute 22 of at least 582 envelopes with P1,000 in cash.

(When I arrived, I was given 22 short, white envelopes. He entrusted me with the distribution of the envelopes to the recipients in exchange for their votes.)

Eveylyn flees Southern Leyte with her daughter and her 4-month old granddaughter, fearing for the safety of her family.

She joins Doble who also left the province together with his wife and 9-year old son.

(Question: How hard is this for you? Answer: Sometimes, it is because we fought against influential peopleDoble says he wants to enforce the law that ordinary people like him and Evelyn believe in.)

(Not all cops can be bought. To our president, we hope you will recognize ordinary people like us who trust in you and the law. Please act on the complaint.)

Stories about vote buying abound during elections. But rarely do witnesses like PO1 Doble and Evelyn surface to protest the practice. Do they have an agenda, or are they for real?