UNA vows to expose 'practices of past' 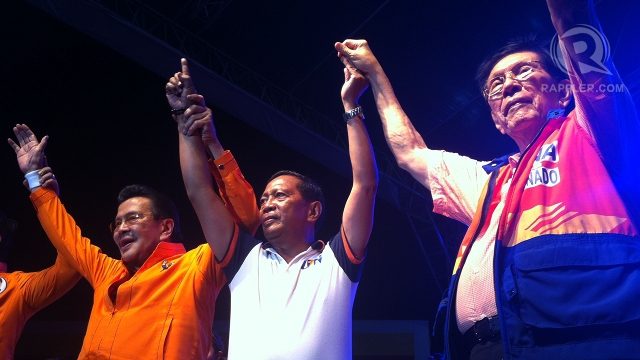 'CONSTRUCTIVE PARTNERS.' UNA vows to continue its role of being "constructive partners" of the administration. File photo by Rappler/Ayee Macaraig

The opposition United Nationalist Alliance (UNA) congratulated the winners of the midterm polls but vowed to continue its role of being “constructive partners” of the administration.

In a statement on Wednesday, May 22, Vice President Jejomar Binay’s alliance also raised issues about how the campaign was run and the polls were conducted.

“The conduct of the midterm election showed that we remain shackled by traditional politics, that the practices of the past are still very much a part of our system. We reserve the right to expose these practices at the proper time,” UNA said without elaborating.

In past days, UNA has called attention to issues like the slow transmission of election results, the early proclamation of the top 6 senatorial bets with just 24% of votes canvassed, and the data access rights given to personnel of Smartmatic.

It has also expressed concern about a supposed 60-30-10 pattern in the election results in favor of Team PNoy that academics and some netizens have raised.

UNA also took a swipe at its rivals, saying unlike its opponents, it took a stand to “veer away from the old and discredited practice of name-calling and character assassination.”

“Sadly, we were mistaken in believing that other quarters shared our goal of raising the level of campaigning. Nonetheless, we take pride in knowing that our candidates and campaign team stayed true to our decision to raise the level of election campaign,” it said.

The coalition has decried what it called black propaganda against its leaders and candidates, particularly Binay, former President Joseph Estrada, Senate President Juan Ponce Enrile and their children. The administration slate Team PNoy though said that its frontrunners were also targets of smear campaigns.

Even after the elections, UNA said it will continue with its role of not just criticizing the administration but also offering options and alternatives.

“Rest assured that our senators shall stay true to our principles of being responsible fiscalizers and constructive partners in nation building.”

Of the 9 UNA candidates, only 3 won: Senators-elect Nancy Binay, JV Ejercito, and Gregorio Honasan II, a re-electionist. Team PNoy candidates got the other 9 Senate seats.

“It is time to move on and learn from the experience. It is time to focus on the formidable tasks up ahead,” said UNA.

The alliance has called itself the constructive opposition, saying it presents alternatives to the administration to ensure that economic growth trickles down to the masses.

Some observers though said the positioning proved problematic, with voters unable to distinguish what makes UNA unique from Team PNoy.

Analysts also said UNA was hard-pressed to push for its candidates and advocacies, with President Benigno Aquino III remaining popular and lending his political capital to actively endorse his candidates.

UNA said, “We fought a good fight but it was not a fight against other political parties. It was a fight for the common man.”

“We believe that UNA has succeeded in reminding our national leadership that economic growth must always benefit the common Filipino, that rosy economic figures and ratings upgrades should translate into more jobs and more food on the table of every worker, farmer, fisherman and the urban poor.”

UNA added that it was “glad” that some senators-elect from Team PNoy also echoed its statements during the campaign.

“It shows that our goal of improving the lives of our people – of bringing the benefits of economic growth to the homes of ordinary Filipinos – is something we have in common despite the partisan divide.”

Before UNA released its statement, some of its candidates already conceded.

Zambales Rep Mitos Magsaysay and resigned Sen Juan Miguel Zubiri issued separate statements thanking their supporters and calling on Filipinos to move on from the polls.

UNA is an alliance of Binay’s Partido Demokratiko Pilipino-Lakas ng Bayan (PDP-Laban) and Estrada’s Pwersa ng Masang Pilipino (PMP). It is expected to be the same vehicle Binay will use for his 2016 presidential bid.

The coalition said, “Despite the many challenges we face in rebuilding a nation, we know we cannot fail the Filipino people.” – Rappler.com