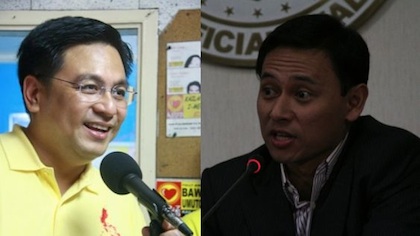 STILL UNSURE. Customs Commissioner Ruffy Biazon and Aurora Rep Sonny Angara are still uncertain about running for the Senate in 2013.

MANILA, Philippines – President Benigno Aquino III is sure. He is endorsing 4 allies as senatorial candidates in 2013. The thing is, two of them are still undecided about running.

Customs Commissioner Ruffy Biazon and Aurora Rep Juan Edgardo “Sonny” Angara welcomed the presidential endorsement. Still, the two have yet to make up their minds about running for the Senate in 2013.

Aquino named Biazon and Angara as his Liberal Party’s (LP) senatorial bets during an open forum at a gathering of Wharton Alumni in Makati on Wednesday, May 16.

The President said the other two candidates are former Akbayan Rep Risa Hontiveros-Baraquel and Joel Villanueva, director general of the Technical Education and Skills Development Authority.

In a text message, Biazon told Rappler he is not yet focusing on the elections.

“I’ll make that decision at the appropriate time and circumstance. Now isn’t that time. As of now, my focus is on this job.”

Biazon is still relatively new to his job as Customs chief. Aquino appointed him to the post only last year. In 2010, he ran as an LP senatorial candidate but lost.

In past interviews, Biazon said he will still have to discuss with his father, former senator turned Muntinlupa Rep Rodolfo Biazon, who among them will run for the Senate in 2013.

The congressman is a prosecution spokesperson in the impeachment trial of Chief Justice Renato Corona. Speculation is rife he will run in 2013 as his father, Sen Edgardo Angara, is already on his last term.

“It’s an honor to be considered,” he told Rappler. “I’ve not made a decision. I think we should wait for the midyear surveys before we make our final decision.”

“A good showing in the surveys will be encouraging,” he added.

The lawyer said he has other options. "There's the option of going local. I can teach, write, or practice. There are lots of options. We are open to a lot of things," he said.

Baraquel and Villanueva seem to be more certain than the two.

In a previous statement sent to Rappler, Hontiveros said she is open to running for the Senate again. She ran alongside Biazon in 2010 but also lost.

“If given another chance, I would so love to work with, and for the President, and for his administration, since we at Akbayan, as a coalition movement, are just at his back.”

In April, Villanueva also told Rappler, “I would be so honored, so inspired if ever that would be granted to me.” With a report from Carmela Fonbuena – Rappler.com