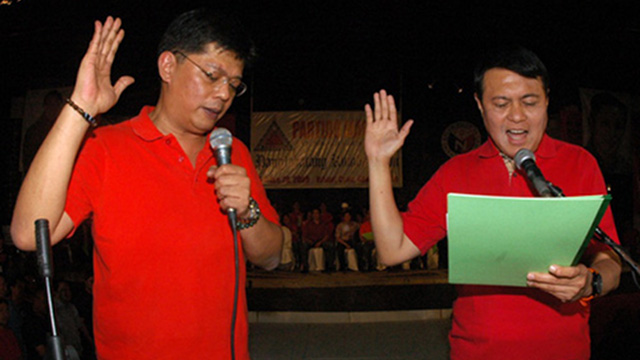 MANILA, Philippines – President Benigno Aquino III confirmed that his Liberal Party (LP) is firming up an alliance with the Nacionalista Party (NP) and the Nationalist People's Coalition (NPC).

Aquino told reporters on Thursday, July 5, that his party will likely end up working with the NP, headed by his bitter rival in the 2010 polls, Sen Manny Villar. The NPC is headed by Aquino's uncle, Eduardo "Danding" Cojuangco.

"I think the talks were very, very successful but I will leave it up to our party President Mar Roxas to make the appropriate announcements," said Aquino.

The LP's rival, Vice President Jejomar Binay's United Nationalist Alliance, said it was also initially in talks with the NP and NPC. Yet Aquino's statement shows that the two parties may end up working with the LP.

NP has two candidates within the Magic 12 of the latest Pulse Asia senatorial survey. They are re-electionist Senator Alan Peter Cayetano and former Las Piñas Rep Cynthia Villar, who ranked 3-5 and 11-21, respectively. Another re-electionist topping the survey is Sen Loren Legarda, who belongs to the NPC.

NP stalwarts have been meeting on Tuesday and Wednesday, July 3-4, to discuss the 2013 elections.

LP stalwart and Budget Secretary Florencio Abad is confident the talks will prosper. “There is an agreement in principle for LP to coalesce with NP. But we will need to work out the mechanics and the details,” Abad said. He said LP has been talking to both Senators Villar and Cayetano.

Remulla said there is no pressure to decide soon. The deadline for the filing of certificate of candidacies (COC) is Oct 5, 2012.

Remulla said bitter rivalries in the local level is a potential problem.

NP has not issued instructions to local members to coalesce with LP, said Nueva Vizcaya Rep. Carlos Padilla. He said the last instruction was given during the impeachment trial. They were told that they are free to coalesce any party.

But Padilla said they are also adjusting based on media statements of party leaders. In Nueva Vizcaya, at least, he said the NPs are now talking to the LPs.

But there are areas where the NP and LP are bitter rivals. Among them, Cavite and Taguig City.

Commission on Elections reversed the court order, but Maliksi refused to vacate the position.

“If push comes to shove, we can run our own campaign,” he said. – Rappler.com