UNA to admin coalition: All politics is local 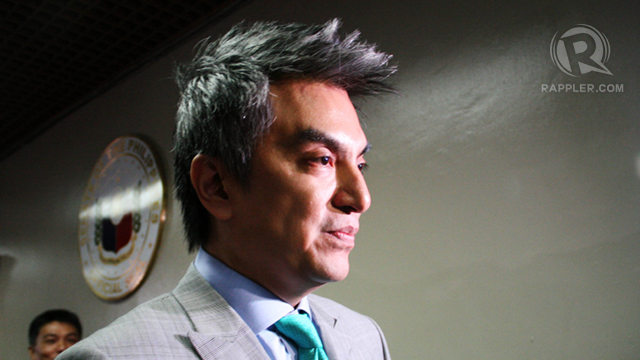 MANILA, Philippines – The United Nationalist Alliance (UNA) admits it is going up against giants but it believes it has one advantage over Goliath: local politics.

UNA Secretary-General and Navotas Rep Tobias “Toby” Tiangco responded to the statement of House Speaker Feliciano Belmonte Jr that the coalition for the 2013 elections of the ruling Liberal Party (LP), Nacionalista Party (NP), and the Nationalist People’s Coalition (NPC) is formidable and “a coalition of giants.”

In a statement on Thursday, July 12, Tiangco defended UNA’s decision to limit the alliance between PDP-Laban and PMP to avoid messy arbitration in the local level.

“All politics is local. The local candidates will be the ones to deliver the votes for the national candidates. We will not sacrifice our local leaders and candidates just to achieve the perception of national strength through sheer number.”

Leaders of LP and NP have admitted that choosing local candidates is a potential problem, with the coalition having to decide which candidate to field from the 3 parties.

Tiangco noted that even Sen Bongbong Marcos of the NP admitted that the administration coalition may declare some areas as so-called free zones where the LP, NP and NPC’s candidates will have to slug it out against each other.

The UNA secretary-general said Binay's coalition already anticipated this problem and was conscious to avoid it.

“We give premium to loyalty of our local leaders. PMP and PDP-Laban have been partners in all elections since 2001.”

“We will not hurry up; we could have collateral benefit from those who will be unhappy with the arbitration of the LP-NP-NPC, assuming that we don’t have leaders who are interested. But if we do, we will always give priority to those who have worked hard for us in the past,” Tiangco said.

Binay’s group has likened itself to David battling the Goliath that is the administration coalition, which has the resources and the numbers.

Both the administration coalition and UNA have drawn flak for having so-called strange bedfellows in their lineups.

The LP and the NP, for example, were bitter rivals in the 2010 presidential race. Then Senators Benigno Aquino III and Manny Villar exchanged allegations of corruption, incompetence and even psychiatric problems.

Binay is also criticized for accepting former Arroyo allies in the UNA senatorial ticket even if he was one of the staunchest critics of former President Gloria Mapacagal-Arroyo.

Senator Miriam Defensor Santiago, who has been a guest candidate of various parties in the past, commented on the coalitions in a press conference on Thursday, July 12.

Santiago said she was not surprised with the political realignments, noting that the Philippines has "the same corrupt politics.”

She said unlike in the US, Philippine political parties have no clear ideological differences.

“It’s the same old politics. Nobody knows even themselves, maybe, what party they really belong to, what principles they really stand for.”