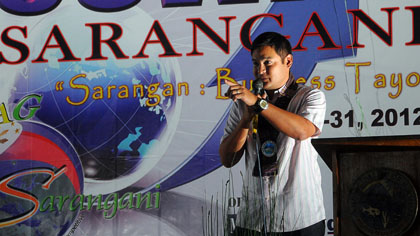 News of his joining LP was kept under wraps but it was believed he took his oath as a party member in early June shortly before he left for Hawaii to attend the wedding of his younger sister Cecil.

Now on his last term as governor of poverty-stricken Sarangani, Dominguez is reportedly eyeing a seat in the House of Representatives next year after he and Sarangani Rep Manny Pacquiao agreed to swap positions in next year’s elections. (Read: Pacquiao shakes up local politics.)

It's not clear how Dominguez’s LP membership would affect the earlier political alliance between him and Pacquiao, who joined the PDP-Laban two months ago. The PDP-Laban is part of the United Nationalist Alliance (UNA) coalition that is forming a 2013 slate separate from the administration's.

Dominguez briefly held the presidency of Lakas-Kampi in 2009 when he was appointed by former defense secretary and then party chair Gilbert Teodoro.

Teodoro was the standard-bearer of Lakas-Kampi, which has since lost its dominance in Philippine politics, during the 2010 presidential election.

Dominguez, then only 34, became the youngest politician from Mindanao to ever head a major political party.He was instrumental in the nomination of Teodoro who was then locked in an internal race with then Vice President Noli de Castro to be the Lakas-KAMPI standard-bearer.

Dominguez resigned as party head when Teodoro quit as Lakas-Kampi chair to concentrate on his presidential bid.

This was reportedly the real reason why both Dominguez and Teodoro quit as president and chair of party, respectively.

Dominguez said that as early as 2006, he was already being courted by Budget Secretary Abad -- through a common friend -- to join the Liberal Party. Abad would often drop by the residence of Dominguez in Alabel, Sarangani.

He said he was party-less as early as the post-2010 elections until joining the LP last month.

In 2004 Dominguez ran as a 27-year old candidate against former governor Miguel Escobar. He campaigned under the banner of anti-corruption and good governance and won handily over the fund scandal-wracked Escobar administration, becoming the youngest elected governor in Mindanao. - Rappler.com