Minors in ARMM allowed to 'register' as voters 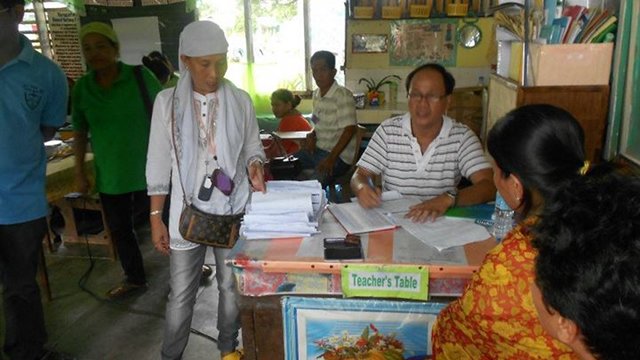 REGISTRATION. An election officer assists registrants in a school in Maguindanao. Photo from LENTE

MANILA, Philippines - Are they simply overeager to vote? Or are they heeding the command of their elders?

Commission on Elections chairman Sixto Brillantes Jr has revealed that about 50,000 minors in the Autonomous Region in Muslim Mindanao (ARMM) have so far filled up voter registration forms. But even if minors are not allowed to vote, the Comelec admitted that it continues to allow them to fill up forms.

The poll body cited two reasons for this: to avoid confrontation in the registration centers and prevent further delay.

The ongoing general voters' registration in the region, which began July 9 and will end on Wednesday, July 18, is being held in 5 provinces -- Lanao del Sur, Maguindanao, Basilan, Sulu, and Tawi-Tawi.

In a statement on its Comelec TV website, the poll body clarified that these minors, just like the rest of the registrants, are still "applicants for registration." This means "that their applications for registration have not yet been approved, and may - at the hearing of the Election Registration Board - be disapproved."

Brillantes said that the Comelec has already figured out a solution to exclude the minors from the final voters' list, but declined to reveal further details. "Ergo, although apparently underaged applicants are processed at the registration center, there remains adequate safeguards to prevent underaged voters from showing up on the final list of voters," said in the statement.

Fr David Procalla, ARMM coordinator of election watchdog Parish Pastoral Council for Responsible Voting (PPCRV), agreed with the poll body's response to the issue, saying that this would avoid commotion in the registration process. "Most of the assigned election officers here are new, so they are still scared if ever commotion will arise," he said.

Comelec has obtained most of the equipment and personnel for the ARMM registration from other regions, thus temporarily suspending the ongoing registration in other parts of the country.

The poll body acknowledged in the statement that "some level of participation from barangay officials is inevitable," but reminded officials not to "enter the registration centers...and attempt to control, direct, or influence the conduct of registration."

Comelec also said that it has already called for additional security personnel and the setting up of more checkpoints to keep away so-called flying registrants, or residents who register in centers outside of their actual voting area.

But Procalla said that they need more. "In some areas, we only have 10 security personnel assigned. In some, there are only two. They can easily be outnumbered by armed bandits here," he said.

The general registration in ARMM aims to clean up the region's list of voters and weed out problems such as multiple registrants and "flying" voters. The region has gained notoriety for election violence and massive cheating. - Rappler.com