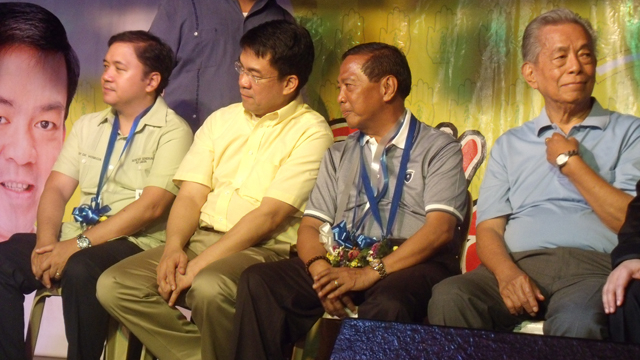 MANILA, Philippines – Members of Vice President Jejomar Binay’s political party used to crack a lot of jokes about themselves. One was: “The party can afford to hold its convention in the most expensive 5-star hotel in Manila. All it needs is a table for 5.”

Nowadays, the Partido Demokratiko Pilipino-Lakas ng Bayan (PDP-Laban) believes the jokes are fond memories of the past. With 2013 and 2016 on target, the party that started with small dreams thinks it might just end up as the country’s ruling party.

It now claims to have 70,000 to 80,000 members nationwide, by the estimates of party executive vice president Joey de Venecia. They are “not necessarily politicians but people who are politically aware and they know the power of what political parties can do,” he said.

PDP-Laban, after all, had been through more challenging times. Laban was slaughtered at the polls by Imelda Marcos’s Kilusang Bagong Lipunan (KBL) during the 1978 Interim Batasang Pambansa elections. But merged with PDP, it helped catapult Corazon Aquino to the presidency in 1986.

PDP-Laban was born in the crucible of the martial law years. It was a merger of two parties under the leadership of prominent leaders of the anti-Marcos movement: PDP of former Sen Aquilino “Nene” Pimentel Jr and Laban of the late Senator Benigno “Ninoy” Aquino Jr.

In a previous interview with Rappler, Pimentel said Aquino tapped him to run under the Laban banner in the parliamentary elections. When the entire opposition slate lost to the Marcoses’ KBL, Pimentel returned to his hometown of Cagayan de Oro, ran for mayor and won, and formed PDP. With Aquino in exile in the US, Pimentel kept in touch with Senator Lorenzo Tañada of the Manila-based Laban.

“I broached the idea of coalescing, eventually merging Laban and PDP because, I said, our objectives were aligned and we wanted freedom to come back to our country under the principles of good government,” said Pimentel.

In a meeting in Cebu in 1982, the deal was sealed. Among the Laban members who attended the meeting was the young Binay, then a minor political player but an active human rights lawyer. 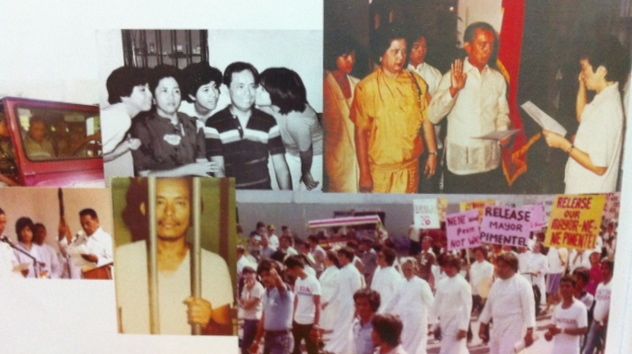 Post-Edsa, Cory Aquino’s brother, Jose “Peping” Cojuangco Jr, took over as party president, but his term was short-lived. The party’s history books say Cojuangco broke away after his proposal of merging PDP-Laban with his smaller party known as Lakas ng Bansa was rejected.

Pimentel and Binay stuck it out with PDP-Laban, leading the celebration of its 30th anniversary this year. 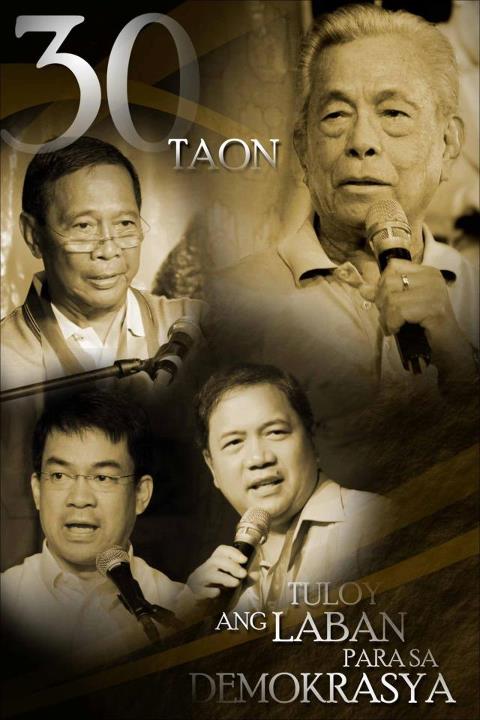 30TH ANNIVERSARY. PDP-Laban celebrated 30 years as a political party this year. The party began in 1982 during the anti-Marcos struggle. Photo from PDP-Laban's Facebook page

The 2013 senatorial candidate said PDP-Laban, like the ruling Liberal Party, requires aspiring members to attend a seminar on party principles. They are given an orientation about the party’s thrusts: social equity, consultative and participatory democracy, and belief in God, among others.

Yet one advocacy stands out. “One of the important principles we really advocate is federalism,” De Venecia said. “That’s really the epitome of local government power, the federal system.”

This comes as no surprise, with Pimentel being the author of the Local Government Code and a Mindanaoan. Binay, too, was a local chief executive for most of his political career.

In 2011, the party, through Pimentel, questioned before the Supreme Court the Aquino-backed law postponing elections in the Autonomous Region in Muslim Mindanao (ARMM). PDP-Laban argued that this “obliterated” ARMM’s autonomy.

But PDP-Laban remains a small party.

Of its 80,000 members, only a few occupy top government posts: Binay and party president Senator Aquilino “Koko” Pimentel III (the co-founder’s son). PDP-Laban has only two members in the House of Representatives (Monique Lagdameo and Mar-Len Abigail Binay of Makati’s 1st and 2nd districts, respectively). The party claims to have has 10 governors and “several” mayors, although Pimentel says the only mayor left is Makati’s Jejomar “Junjun” Binay, son of the party chair.

What PDP-Laban lacks in numbers and positions, it tries to make up for in a formula that proved successful in Binay’s 2010 vice presidential bid: local networks.

Over the past 2 years, according to De Venecia, the party has established alliances and membership in parts of the following areas: La Union, Ilocos Norte, Ilocos Sur, Isabela, Cebu, Iloilo, Antique, Eastern Samar, Tacloban, Leyte, and Mindanao, especially Northern Mindanao and the ARMM. 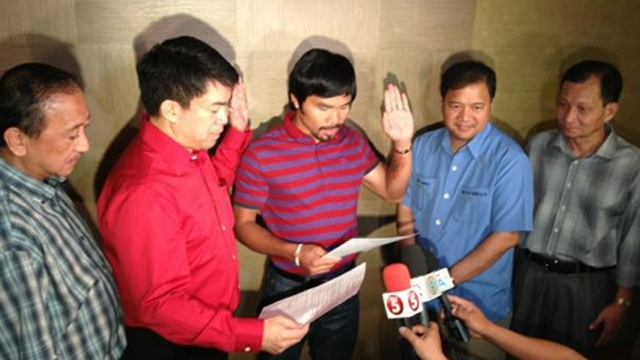 For the 2013 polls, PDP-Laban has turned to a trusted ally: the Pwersa ng Masang Pilipino (PMP) of former President Joseph Estrada. The 2 parties have been together in the 2004, 2007, and 2010 electoral battles as the opposition to the Arroyo administration.

The group was called the United Opposition or UNO, but changed the coalition’s name to the United Nationalist Alliance (UNA), insisting that it is not against the Aquino presidency but will act as a “constructive opposition.”

“PDP-Laban is more institutionalized than PMP…. We have a party institute that is the education committee that educates our members on the principles of PDP-Laban, and I think that’s what it brings to a less organized PMP.”

He said: “That political infrastructure is so important because, as they say, you can have hundreds of millions of pesos in TV advertising, but if you don’t have the men on the ground, who’s gonna deliver your votes? Who’s gonna bring your people to the precincts to vote? Whose gonna protect your votes?”

De Venecia said Binay as chairman and Cojuangco as secretary-general recently stepped in to expand the party ahead of the 2013 polls. 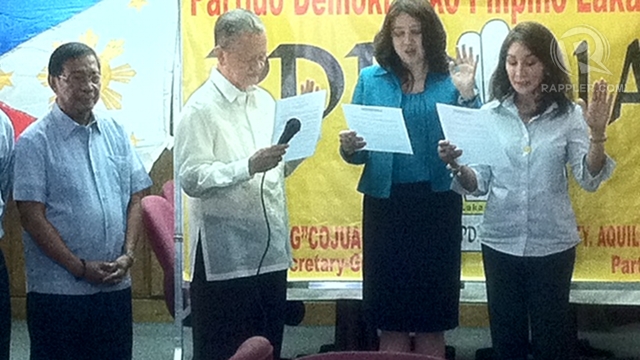 TAKING OVER. Vice President Binay and Peping Cojuangco are taking over as top party leaders with Senator Koko Pimentel becoming a guest candidate of the administration slate. File photo

Political observers, though, saw the move as an attempt to ease out the younger Pimentel. The PDP-Laban president bolted UNA and joined the administration slate over the inclusion in the UNA ticket of resigned Sen Juan Miguel Zubiri, whom Pimentel accused of cheating him in the 2010 elections.

De Venecia said PDP-Laban’s alliance with PMP is for the long haul. UNA leaders have described 2013 as a mere curtain raiser for 2016.

With Binay’s ambitions, preparations, and survey ratings, PDP-Laban is looking to the future. “Hopefully, our party will become one day the ruling party in 2016,” said De Venecia.

This time, they’re not joking. – Rappler.com