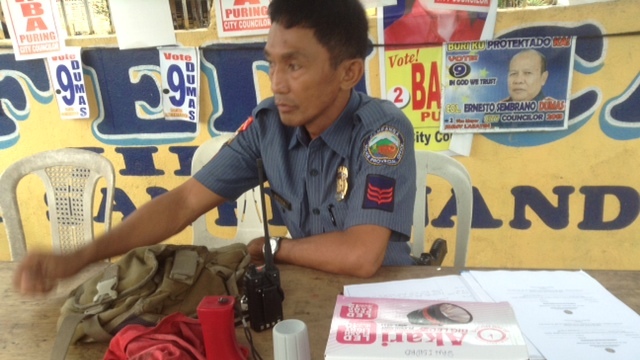 ON STANDBY. Cops are on alert in San Fernando, Pampanga.

SAN FERNANDO CITY, Philipipnes - The police has placed 9 towns in the province of Pampanga under its watch list due to the presence of loose firearms and partisan armed groups.

Arroyo, who is seeking a second term as the representative of the second district of Pampanga, would not be able vote on Monday, May 13, however as she failed to ask permission from the court to leave the Veterans Memorial Medical Center.

Arroyo has been under hospital arrest since 2011 for her alleged involvement in the reported fraud in the 2007 senatorial elections. She was allowed to post bail by the Pasay regional trial court in July 2012 but was taken back to the hospital in October after she was charged with plunder.

Power outage also hit Balanga City, Bataan from 4:50 am to 5:20 a.m. Power has been restored. - Rappler.com