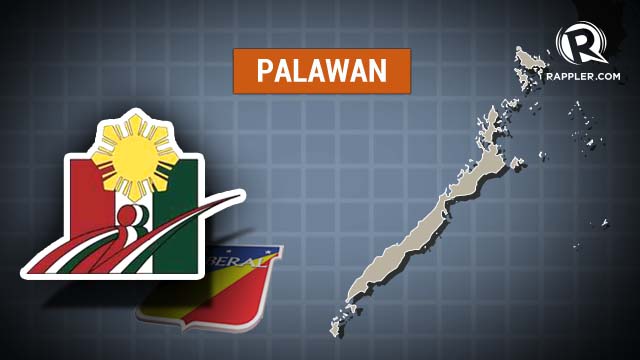 PUERTO PRINCESA CITY, Philippines - The Liberal Party (LP) in Palawan suffered a stunning defeat in the local polls as the Commission on Elections (Comelec) official count drew to a close Wednesday, May 15, with the local affiliate party of the Nationalist People's Coalition (NPC) sweeping all the major local positions.

The feat was highlighted by the crushing loss of incumbent governor Abraham Kahlil Mitra to Jose Alvarez, who won nearly 70% of the total votes cast in the island province. (Click here for the unofficial results from the Comelec-Rappler Mirror Server)

Mayor Hagedorn, however, lost in his senatorial bid. He landed 18th in the national vote count. (Click here for the official Comelec results for the senatorial election)

Mitra, son of former House Speaker Ramon Mitra and battling for a second term as governor, was hobbled during the campaign by allegations of misuse of billions of funds from the Malampaya royalty.

"I think the people were just tired of trash talk and non performance," Alvarez told Rappler prior to his proclamation.

He attributed his party's win to Mitra's own failure to make an impact on poverty, which is still widespread in the province, and corruption.

A former logger, Alvarez had lost to Mitra by a narrow margin during the 2010 elections. He nearly succeeded in forcing Mitra to a recall election in the middle of the latter's term by gathering enough requisite signatures but the poll body was unable to act on the petition in time.

Peter Sing, a Manila-based political consultant, said he had predicted victory for Alvarez but did not expect the outcome to be a landslide in favor of the local party Partido Pagbabago ng Palawan.

"I was looking at a modest margin considering that Mr. Alvarez was coming from a loss. It appears that voters really took to the election issues, especially the Malampaya fund corruption and the murder of journalist Gerry Ortega," Sing told Rappler.

Mitra was accused by civil society groups of having profited from over P3 billion in Malampaya royalty shares received by the province during his previous term as congressman.

The Senate Blue Ribbon Committee, which investigated the Malampaya fund misuse, also attributed the murder of Ortega, a popular radio commentator who was shot by a hired gunman in 2010, to the expose on the Malampaya funds.

Sing said Mitra's support and political affiliation with former Governor Joel T. Reyes, who remains in hiding for the Ortega murder, "was a major baggage for him coming into the elections."

The local Liberal Party, however, still managed to win minority seats in the provincial board and the mayoral seats in some of the major towns. This includes Coron, where former vice governor Clara Reyes, wife of Joel T. Reyes, won as mayor. - Rappler.com