OPINION: This section will feature experts' perspectives, reporters’ blogs, and other commentaries 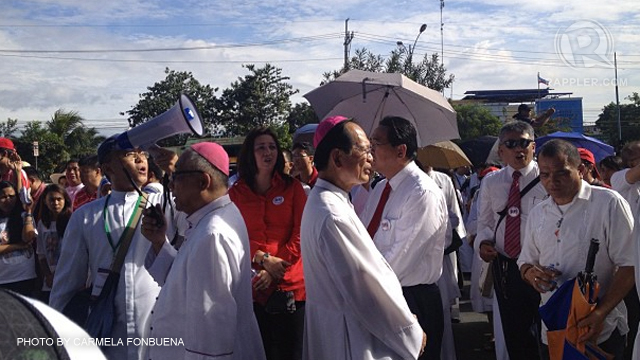 MANILA, Philippines – Before the historic vote on the Reproductive Health (RH) bill in December, the Catholic Bishops’ Conference of the Philippines (CBCP) was confident they had the numbers to defeat the measure.

The CBCP had delayed the bill in the House of Representatives for 15 years. What was another 5 months to pull off?

The bishops wanted the vote to happen as close as possible to the campaign period of the 2013 midterm polls. The tack was to scare off congressmen that they would face the wrath of the Church if they would vote for the bill that sought to use government money to provide artificial family planning services to the population. A number of Church leaders had warned that they would not hesitate to use the pulpit for this.

The bishops, however, were outmaneuvered by the Aquino government, which understood better the practical political considerations of House members and knew what buttons to push at the right time.

Congressmen were given two options. Between millions of pesos in pork barrel funds, the release or withholding of which could make or break their re-election campaigns, or the threat of a Church whose political power during elections is not reliable, the choice for many was easy.

To be sure, there is no Catholic vote – on the national level. The bishops know this. Joseph Estrada’s victory in the 1998 presidential race proved this.

Estrada – a known womanizer, gambler, drinker, and college dropout – won by landslide despite not meeting CBCP’s criteria for good leaders that were read at the pulpits on the eve of the elections: “Vote for persons who morally, intellectually, and physically show themselves capable of inspiring the whole nation toward a hopeful future.”

In the 2010, several bishops openly endorsed Kapatiran Party presidential candidate John Carlos “JC” delos Reyes and threw oblique criticism at Aquino for his subtle support for the population control program. The bishops’ bet, however, found himself at the tailend, garnering only 44,244 votes.

But at the local level, where politics tend to be more personal, the bishops believe they still have electoral influence. In a tight local race, where victory could be a matter of a few dozen of votes, an antagonized Church can spell serious trouble for one’s candidacy.

So after two failed negotiations with Malacañang on the RH bill, highlighted by the walkout of the bishops on both instances, the bishops changed their tacks, said Lipa Archbishop Ramon Arguelles.

The bishops believed that overpopulation was not an issue in the provinces, and this became their takeoff point in talking congressmen out of supporting the bill. “It is a personal campaign aimed at telling our lawmakers the lies behind the RH,” Arguelles said.

The strategy worked. Seven lawmakers from the minority bloc withdrew their names from the roster of 15 co-sponsors of the bill.

The victory was short-lived, however. 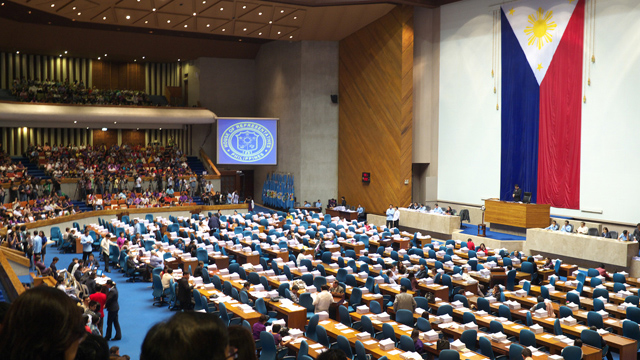 A few days before December 12, when Congress voted on second reading, the bishops were appraised that they had the numbers to defeat the RH bill, according to Arguelles and Malolos Bishop Jose Oliveros.

“We had the upper-hand based on our count – that is, before the lawmakers were pressured by Malacañang,” Oliveros said.

Arguelles, whose ecclesiastical jurisdiction covers Batangas, said he was able to talk to the 4 district congressmen to vote against RH.

He also was given assurances by former Batangas congressman and now Senator Ralph Recto, husband of the provincial governor, that he would vote “no” to the bill.

In Bulacan, Oliveros said he was able to convince 3 out of 4 district representatives to vote “no.”

In Palawan, Bishop Pedro Arigo said told us in a previous interview that the two congressmen of the province were against the bill.

The result of the close voting in the House on the second reading of the House – 113-104 in favor of “yes,” with 3 abstentions – somehow proved the political clout of the bishops at the local level.

“Before the second voting was held, I sincerely thought we’d win,” Arguelles said.

However, Arguelles insisted, the presence of Budget Secretary Florencio Abad, Local Government Secretary Mar Roxas, and presidential spokesperson Edwin Lacierda at the plenary hall scuttled what could have been a victory for the Church.

“The presence of the 3 was a form of pressure from Malacañang. They dangled pork barrel to those who were supposed to vote ‘no’ and got away with it,” Arguelles said. The bishop was at the plenary during the second voting.

The bishop also said that he personally knew of 5 lawmakers who were supposed to vote “no” but the Palace threatened to withhold their pork barrel funds if they would vote with the Church.

Retired Archbishop Oscar Cruz said the CBCP pastoral statement “Contraception is Corruption,” which was issued before the House voted on 3rd reading, was in reference to how Malacañang corrupted Congress through pork barrel.

They were hoping for a last minute miracle, banking on the conscience of around 60 lawmakers who failed to vote on 2nd reading, to seal the fate of RH on 3rd reading.

While the bishops were quick to accuse Malacañang of corrupting the lawmakers, they had lapses on their own. They became too confident that they had pushed the RH bill to the backburner after 7 sponsors of the bill withdrew their support. They let their guard down.

Based on the results of the 2nd voting, only a few bishops delivered.

From Batangas, under Arguelles, all 4 congressmen voted “no.”

From Cebu province, under the ecclesiastical jurisdiction of CBCP president Archbishop Jose Palma, 4 congressmen out of 6 voted “no.” Cebu City delivered the 5th “no” vote.

From Agusan del Norte and Agusan del Sur, which are within the ecclesiastical jurisdiction of Aquino critic Butuan Bishop Juan de Dios Pueblos, 3 out of 4 congressmen voted “no.”

In Manila, under the control of newly crowned Cardinal, Archbishop Luis Antonio Tagle, 4 out of 6 congressmen voted “no.”

Elsewhere, the bishops were trumped convincingly.

In Pangasinan, under the ecclesiastical jurisdiction of Archbishop Socrates Villegas -- Cardinal Sin’s favorite protégée and also the CBCP vice president – the votes of the 6 congressmen were split. First district congresswoman Kimi Cojuangco was even one of the authors of the RH bill.

In Bulacan under Oliveros, the “yes” vote practically won, since 2 of 4 congressmen supported the RH bill, while the 2 others were absent during the 2nd and 3rd readings.

In Pampanga, where there a number of priests are known to parishioners for carrying out affairs, Archbishop Paciano Aniceto was able to convince only 1 out of 4 congressmen to vote “no” on 2nd reading. On the 3rd reading, all 4 Pampanga representatives were not around to participate in the voting.

In Cavite, where Tagle came from before being appointed as Manila Archbishop, only 2 out of 7 representatives voted “no.” The Vatican has yet to appoint a replacement for Tagle in Cavite.

In Iloilo, which is under Jaro Archbishop and former CBCP president Angel Lagdameo, only 1 out of 7 congressmen voted ‘no.” The Jaro diocese was also where Cardinal Sin came from before his Manila posting.

Bishops from the Autonomous Region in Muslim Mindanao provinces also failed to deliver. All congressmen in the region belonged to the Muslim faith, which does not frown upon artifical family planning methods provided in the RH bill.

In hindsight, Arguelles said it is likely that other bishops did not put enough pressure on lawmakers within their jurisdiction following the initial success with the sponsors of the bill. “Some may have been half-hearted, or thought they have the issue in the bag,” he said.

Apart from becoming complacent, the Church was also hurt by lawmakers' broken promises.

Oliveros cited Bulacan Rep. Victoria Sy Alvarado, who publicly announced that she would vote against the RH bill. “She said her vow before a church gathering, inside a church. And in the voting, she voted ‘yes,’” Oliveros said.

Malacañang was working behind the scene.

Alvarado’s husband, Bulacan governor Wilhemino Alvarado, is seeking reelection in 2013. Initially, he was going to be challenged by a party mate of President Aquino, former governor and now 3rd district congressman Joselito Mendoza. The Liberal Party persuaded Mendoza to give up his bid, thus giving Alvarado, who is a Lakas-Kampi member, a free pass at retaining his post.

In the Senate, where the RH bill got the nod of 13 senators against 8, Recto voted “yes” instead of the “no” that he promised the bishop. “Now the governor (Vilma Santos, Recto’s wife) maybe is too embarrassed to call me. She has not called me since the voting,” Arguelles said.

It is widely believed that Recto’s support for the RH bill, a priority bill of the President, is his way of making up for his earlier blunder of trying to pass a sin tax bill that was favorable to tobacco firms than to the government’s revenue-generation program.

The Church campaign was also hurt by bishops who took for granted the possible votes from the party-list members. Out of the 38 party-list congressmen, only 8 voted “no” to the RH bill.

Even before the bishops could regroup following the narrow defeat in the 2nd reading, Malacañang got two steps ahead by certifying the bill as urgent. On 3rd reading on December 17, the number of those voting “yes” increased to 133, while the “no” votes whittled down to 79 – some of those who initially voted “no” were conspicuously absent.

The volte face of some House members was plain and simple political pragmatism.

The Catholic Church has not proven its political pull, constrained by the Canon Law that its members cannot actively participate in elections. They cannot openly endorse candidates and the least they can do is to issue guidelines for voters to discern on who to vote.

Many times, the Catholic vote, if any, in a locality depends on how aggressive the bishop is and how faithful the constituents are to the teachings.

Moreover, to a politician, guidelines set by church leaders are just a piece of paper that do not necessarily translate to votes. Local politicians know too well that to win a local election, one needs a well-oiled machinery – in this case, the pork barrel fund to fuel the campaign.

To Archbishop Cruz, the perceived declining influence of the Church on state matters “has been happening for the longest time.” In the first place, the perception that the bishops as a whole exercise influence on national issues has been largely exaggerated, the prelate says.

Cruz pointed out that the original people power in 1986 that dethroned Marcos and its 2001 repeat that ousted Estrada were not instigated by the Church but by one Church member – the late Cardinal Sin.

While it may be true that the bishops slammed the 1986 snap election as fraud, it was only Sin who called on the people to troop to Edsa. The bishops too, were silent on the ouster call on Estrada, he noted.

Present Church leaders, including Cardinal Tagle and Palma, lacked the political aggressiveness of Sin, he said. During the entire RH debate, “they were quiet. You could say they were not pro-active,” Cruz observed.

“Notice that it was the CBCP vice president who issued the pastoral statement following the second reading on the RH. Why Villegas and not Palma?” the retired bishop said.

The RH bill is now a law: Republic Act 10354 or the Responsible Parenthood and Reproductive Health Act of 2012, signed by the President just 4 days before Christmas.

If this is a misfortune, then it appears the bishops have only themselves to blame for it. – Rappler.com