PSG chief: ‘I take full responsibility’ for unregistered vaccine use 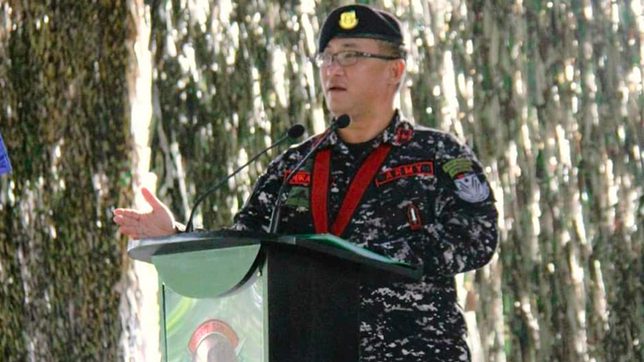 PSG CHIEF. Brigadier General Jesus Durante, Presidential Security Group Commander, says the PSG acted on its own when it decided to use an unregistered vaccine on some of its men

Durante said that they did the vaccination “independently” and no one convinced them do it. “We vaccinated ourselves. It’s so easy,” he said.

“The PSG alone vaccinated ourselves,” Durante said when asked whether they were indeed the ones who injected the vaccine among themselves.

“We took the risk. We are soldiers so we have to take risks just to accomplish our mission,” he said, noting that they were aware of the implications. He had earlier said that they made the decision to protect the President.

On Tuesday, December 29, medical experts called for the “safe and transparent” use of COVID-19 vaccines after an unregistered vaccine was used on top government officials and soldiers.

Experts call for ‘safe, transparent’ vaccinations after unregistered vaccine use

The Healthcare Professionals Alliance Against COVID-19 (HPAAC) said it was alarmed that some Filipinos have already received COVID-19 vaccines which were not registered with the Food and Drug Administration (FDA).

‘We did some research’

Durante said that some PSG members had been vaccinated against COVID-19 as early as September, while the last batch was done in October.

“Everybody is aware actually that most countries have acquired vaccines. Some of them are developing. That was one of our bases. So we came up with that based on the experience of other nations. We did some research about it,” he added.

Responding to questions, he said he did not ask permission from President Rodrigo Duterte about administering the unregistered vaccine on his close-in security, and that the Chief Executive was only informed about the decision after the PSG vaccination in October.

In a separate interview on Wednesday morning, Defense Secretary Delfin Lorenzana said that the COVID-19 vaccines used by PSG members  are indeed smuggled as it was unauthorized, but the intention behind the act is “justified” as it is meant to protect the President.

Lorenzana said that he has no information on the source of the vaccines, which Duterte had earlier identified as China’s SinoPharm vaccine.

The Bureau of Customs (BOC) said on Tuesday, December 29, that it was not informed of the importation of the COVID-19 vaccines given to military personnel and top officials of the government. The agency said if the vaccines are proven smuggled, officials involved could also face administrative and civil cases. – Rappler.com