QC to have two additional districts 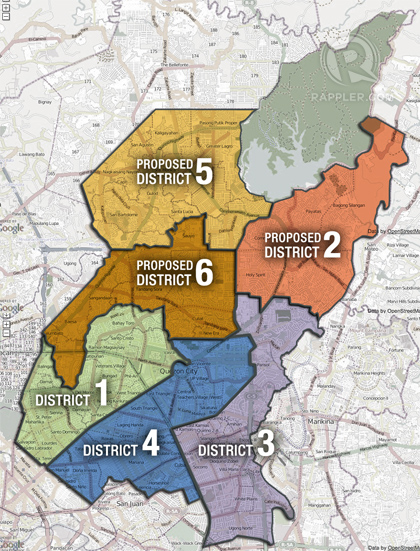 SECOND DISTRICT. Two new districts will be carved out of this giant district in Quezon City.

President Benigno Aquino III approved on July 2 Republic Act 10170, which divides the second district, the biggest in Quezon City, into 3. This process will increase the city's current four districts to six.

The newly-signed law mandates that 25 out of the 30 barangays in the second district will comprise the two new districts:

The remaining 5 barangays will comprise what will be left of the second district:

Four of these barangays (Barangays Commonwealth, Batasan Hills, Payatas, and Holy Spirit) are considered the most populous barangays in the city.

Sen. Ferdinand Marcos Jr., chair of the Senate Committee on Local Government, commended the passage of this "long-overdue bill," saying that "with the large population of Quezon City, the people of this local government unit undoubtedly deserve additional seats in the House of Representatives."

According to the new law, reapportioning the Quezon City legislative districts "shall commence in the next national and local elections after the effectivity of the law." The Commission on Elections (Comelec) will set for a city-wide plebiscite, wherein QC residents will vote whether or not to allow the creation of the new districts.

The creation of more districts in QC allows for additional seats in the House of Representatives. This gives defeated 2010 congressional candidates in QC's second district a chance to run for the same post in the new districts, given that their residences are in these new areas. Among them are former QC 2nd district representatives Ismael Mathay III and Annie Rosa Susano.

It was Susano who presented some compact flash (CF) cards as evidence of election fraud in a congressional hearing held after the 2010 automated polls. She was warned that it would bring about criminal liabilities, since possession of election paraphernalia is prohibited under the automation law. No case, however, was filed against her.

District 2 of Quezon City has already been the subject of a planned creation for a new local government unit. In 1998, the government approved a proposal that mandates carving out 15 barangays in it to establish Novaliches City. But in the city-wide plebiscite in 1999, majority of the city's voting residents rejected the creation of the new city. - Rappler.com