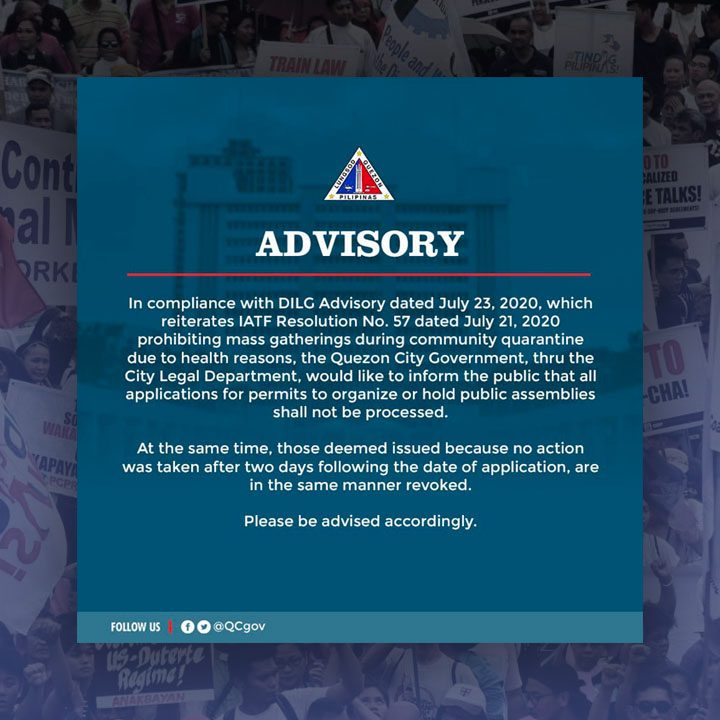 Facebook Twitter Copy URL
Copied
The announcement comes 3 days before the President's State of the Nation Address, and after various groups have announced on-ground mobilization

Three days before President Rodrigo Duterte’s 5th State of the Nation Address (SONA) on Monday, July 27, the Quezon City government announced it would not be issuing permits to groups planning protest actions.

Permits that have been “deemed issued” – after the city government failed to act on their application – are also revoked.

The city government is backtracking on Mayor Joy Belmonte’s promise that protest actions would be allowed as long as organizers comply with health protocols.

On Tuesday, July 21, Belmonte even met with rally organizers to discuss health and safety protocols in conducting public assemblies.

In an advisory posted on its Facebook page on Friday, July 24, the Quezon City government said it was complying with the memorandum that the Department of the Interior and Local Government (DILG) released on Thursday, July 23.

The memorandum reiterated Resolution No. 57 of the Inter-Agency Task Force on Emerging Infectious Diseases, prohibiting mass gatherings during community quarantine due to health reasons.

“[We] would like to inform the public that all applications for permits to organize or hold public assemblies shall not be processed. At the same time, those deemed issued because no action was taken after two days following the date of application, are in the same manner revoked,” the statement read.

Belmonte said all local governments units (LGUs) are constrained to follow the directive of the national government through the DILG.

Adopting the theme #SONAgKAISA, various groups are expected to mobilize for on-ground protests, including the People’s SONA rally along Commonwealth Avenue leading to the Batasang Pambansa complex on Monday.

They intend to amplify calls to junk the anti-terrorism law and renew the franchise of the ABS-CBN broadcast network.

(The obvious intention of the DILG memo on mass gatherings is to scare LGUs and citizens from holding protests on the day of the SONA.)

Reyes added that these circumstances are not new – the ‘Grand Mañanita’ rally on Independence Day pushed through despite Justice Secretary Menardo Guevarra’s warning to protesters that they would face “penal sanctions under existing public health laws.”

(This is not new. We have been through a situation like this. If they couldn’t stop our Mañanita protests on Independence Day, what makes #SONAgKAISA different? And just like before, we should implement health protocols, such as wearing of face masks, observing physical distancing, and using of disinfectants.)

“No one should be arrested for the peaceful exercise of one’s constitutional rights,” he said.

Human right lawyers earlier stressed that the Bayanihan to Heal As One Act and the public health law, Republic Act No. 11332 or the Mandatory Reporting of Notifiable Diseases Act, do not prohibit rallies.  – Rappler.com