AFTER WORK HOURS. The Quezon City government starts their 'Bakuna Nights' at the city hall grounds on Wednesday evening, June 16, 2021, with an initial 2,000 Sinovac COVID-19 vaccines to help inoculate A4 priority groups having trouble visiting vaccination sites in the morning due to work schedules.

Facebook Twitter Copy URL
Copied
A total of 1,015,000 people have received at least one COVID-19 vaccine shot in the Philippines' most populous city, or around 59% of Quezon City's target population

One million people in Quezon City have received at least one dose of the COVID-19 vaccine, the local government unit announced on Friday, August 6.

The number is a promising milestone for the Philippines’ most populous city, where a highly mobile population could complicate efforts to prevent the spread of the COVID-19 Delta variant.

Some 597,000 people have received their second dose, but the actual number of fully vaccinated individuals is 689,805, as those who have received the one-shot Johnson & Johnson vaccine are considered fully protected.

“We are proud of this achievement but again, this is just a reminder of how far we still have to go in order to achieve population protection,” Quezon City Mayor Joy Belmonte said in a statement.

Despite having administered the most number of COVID-19 vaccine doses in the Philippines, Quezon City trails in vaccinations in Metro Manila in terms of number of vaccinated per 100 people.

That’s due to multiple challenges – such as the logistics and manpower that are automatically needed for big cities, as well as the still unstable vaccine supply from the national government. 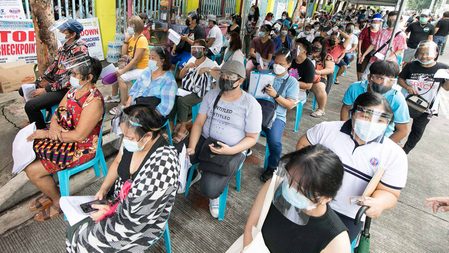 “We had a limited supply of vaccines in the last few months, but with the increased supply committed to us by the national government this enhanced community quarantine (ECQ), we will accelerate inoculations once the supply is delivered to the city,” Belmonte said.

She was referring to the additional 4 million jabs that the national government promised to allocate to Metro Manila, in an ambitious bid by mayors to administer all of them before the end of the ECQ on August 20.

If mayors are successful in their goal, Metro Manila would be able to raise its vaccination coverage to 45% of its population by end of the hard lockdown, just 5% short of the “population protection” target.

As of Friday, the presence of the highly infectious Delta variant has been confirmed in all 16 cities and one municipality in the metropolis.