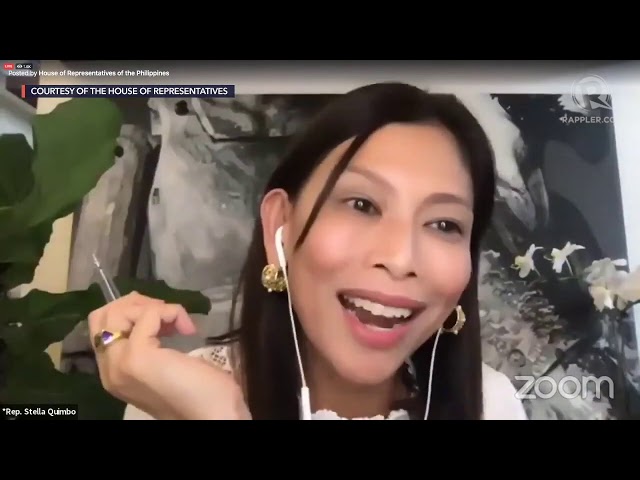 Economist turned lawmaker Stella Quimbo doubted the Philippine Health Insurance Corporation (PhilHealth) was in danger of bankruptcy, accusing the agency of exaggerating figures as it faced yet another corruption scandal.

The Marikina City 2nd District representative faced off in a battle of computations with PhilHealth acting senior vice president for actuarial services Nerissa Santiago during a House investigation on the state health insurer on Wednesday, August 5.

Santiago said Philhealth estimated that its coronavirus payouts to beneficiaries for 2020 would be P45 billion, since the agency was projecting to spend for 209,000 confirmed cases.

But Quimbo said this was wrong, because PhilHealth did not take into account that only 20% of the total number of infected people ended up being hospitalized.

(Here’s the thing: I already did the math. I assumed the projections. Let’s say we have 209,000 cases and we assume 20% of them will be hospitalized because that’s the global measure… My computation there – and this is the maximum already – is P3.2 billion. It really won’t add up to P45 billion.)

(My worry here is that your consistent over-projections give more leeway to commit fraud, which is not good. We are closely watching over this.)

Quimbo also questioned how Santiago was able to conclude in a Senate hearing the day before that PhilHealth would supposedly go bankrupt by mid-2021 because of the COVID-19 pandemic.

The economist-congresswoman said her own computations showed the agency would still have around P112 billion in reserve funds in 2021.

“So if I get your reserved balance, beginning balance, I add premium contributions, I add investment income, I subtract benefit payments, that’s about P119 billion… So [if] I subtract P7 billion [worth of your operational expenses] from P119 billion, you should still have P112 billion entering 2021,” Quimbo said in a mix of English and Filipino.

Quimbo’s numbers were close to the estimate of Senate President Pro-Tempore Ralph Recto, who said PhilHealth should have P110 billion in reserve funds.

Santiago said in the Senate hearing Tuesday, August 4, if the government does not increase its yearly subsidy of P71 billion, PhilHealth would supposedly no longer have funds to “stay afloat” beyond 2021.

This is despite whistleblowers testifying before senators that PhilHealth executives may have pocketed around P15 billion through fraudulent schemes and bloated its IT sector budget by at least P734 million.

On Wednesday, House members called for the abolition of PhilHealth’s all case rate policy, arguing it costs the government some P102 billion in overpayments and is an “unjust enrichment” scheme for hospitals. – Rappler.com