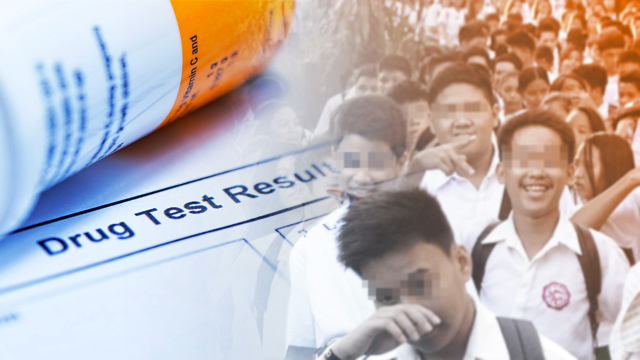 President Rodrigo Duterte and Cabinet officials approved the plan for the random drug tests, after the DepEd presented the guidelines during last week's Cabinet meeting.

This comes despite concerns on the sampling method and confidentiality of the drug tests.

Parents and human rights advocates also fear that it would make students vulnerable in the government's war against drugs, given reports of gunmen killing alleged drug users based merely on lists. (READ: Random drug testing of students will make minors 'open targets')

CPADAO chief Ivy Durano-Meca earlier said the random drug tests will cover all of Cebu’s municipal schools. She stressed, though, that the results of the drug tests will not be used as means to embarrass or humiliate the students.

The DepEd guidelines mandate the confidentiality of the holding of the drug test for students.

Ligan made the pronouncement during the random drug testing of employees of the capitol on Monday. At least 480 capitol employees underwent the surprise drug tests.

The first batch of 240 job order and regular employees were randomly selected by CPADAO to undergo the drug tests immediately after the flag raising ceremony Monday morning. Another batch of 240 employees was randomly picked for the afternoon schedule.

Ligan said the result of today’s drug test will be known within the next few days. He stressed that the random drug tests were conducted to ensure that the provincial government is a drug-free workplace.

In Cebu City, Gary Lao, the chief of the City Office for Substance Abuse Prevention (Cosap), said his office would wait for the official guidelines and request from the DepEd Cebu City Division before it can facilitate the random drug testing for high schools students.

Lao claimed some parents had gone to his office, requesting for drug tests in the schools where their children are enrolled.

"The parents have expressed support for the drug test, but we have to wait for the official guidelines from the DepEd," Lao said.

Lao told Rappler that a total of 348 elementary and high school teachers in Cebu City had undergone the random drug tests. Not one was found positive, although one teacher declined to undergo the test.

“I am very happy that of the 348 teachers that have undergone the drug test, not one was found positive. That should be the case for all Cebu City teachers because they are supposed to be role models for our students and the community,” he said.

Cosap has informed the DepEd Cebu City Division about the refusal of a male high school teacher to undergo the drug test. The teacher could be held administratively liable for insubordination, considering that the conduct of drug tests for teachers was approved by the Civil Service Commission.

The number of Cebu City teachers that have undergone drug testing accounts for 30% of the total number of teachers in the city. Lao said the random drug tests for teachers have been temporarily suspended as Cosap concentrates on conducting drug tests for city hall employees. – Rappler.com