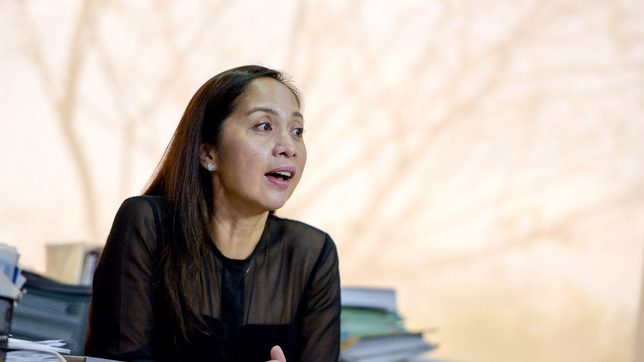 One of the 3 ousted House panel chairpersons called out Speaker Alan Peter Cayetano for “abandoning honor” when he decided to involve all lawmakers in his speakership tussle with Marinduque Representative Lord Allan Velasco.

“It seems like we are abandoning tradition. We are abandoning honor. We’re supposed to be honorables,” AAMBIS-OWA Representative Sharon Garin told ANC on Wednesday, October 7, in response to Cayetano’s unceremonious removal of the House panel chairs.

Garin, who chaired the House committee on economic affairs until her removal from position on October 6, said she knew her removal was forthcoming as she backed the speakership of Velasco, who is supposed to have a term-sharing deal with Cayetano.

But what angered her is that the new chair of her House panel is Aklan 2nd District Representative Teodorico Haresco Jr, a non-party-list lawmaker.

Garin is a key member of the Party-list Coalition Foundation, Incorporated (PCFI) that supports Velasco. With at least 52 members in the House, PCFI is entitled to 20% of all leadership positions in the chamber.

“We’re abandoning a lot of things by doing this – that we are involving all the congressmen, we are trying to involve them in a fight for speakership which is actually just between the two of them,” Garin said.

“It is insulting to each and every congressman and I hope that we all realize that na respeto lang sana (we should just respect each other),” she added.

As chair of the House committee on economic affairs, Garin had shepherded the speedy passage of several stimulus packages in the House aimed to curb the events of coronavirus pandemic.

Two other lawmakers from political parties associated with Velasco were also unseated as House committee chairpersons on Tuesday, October 6.

Quezon 4th District Representative Angelina “Helen” Tan, a member of the Nationalist People’s Coalition (NPC), was kicked out as committee on health chairperson.

Both were shocked by their removal, since they had not spoken about the the Cayetano-Velasco feud in the past weeks.

Speaking in another ANC interview, Tan said she never spoke ill of the Speaker.

(I was really surprised. I can’t think of any reason why because I’m working quietly on the committee on health. I never spoke ill of the Speaker. I have been very supportive on all the plans of the leadership.)

She earlier told Rappler that the only reason she could think of for her removal was her membership in the NPC, which is deemed to be pro-Velasco.

On Tuesday, Cayetano and his allies also moved to abruptly pass on 2nd reading the proposed 2021 budget and to suspend session until November 14, amping up his power play against the Velasco bloc.

The Speaker argued that this was his way of countering Velasco’s allegations that he is holding hostage the 2021 budget to cling to power.

But senators already warned that this could derail the passage of the 2021 budget, which Tan agreed with.

(The reality is that there will be a delay in the passage of the budget even if the leadership would say they would railroad it. I can already see possible delays in the budget approval.

Cayetano, however, assured senators that the House would be able to pass the budget on final reading on November 16.

The last time Congress failed to pass the budget on time was during the aftermath of the 2018 House coup that replaced Davao del Norte 1st District Representative Pantaleon Alvarez with former Pampanga congresswoman Gloria Macapagal Arrroyo.

Duterte already told his warring his allies that the 2021 budget must be approved on time – before the end of December – to keep the government from operating on another reenacted budget next year.

The Duterte administration had to operate on a reenacted budget for the first 3 months of 2020 after Duterte failed to sign the budget bill on time. Congress passed the budget on December 11, 2019, but the President signed it only January 6, 2020. – Rappler.com