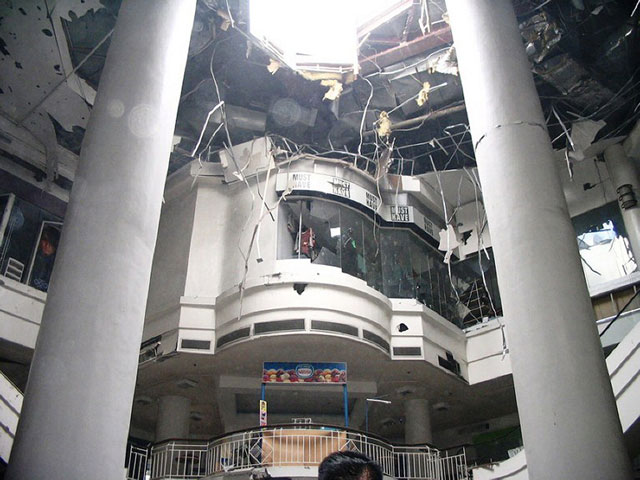 FLASHBACK. The site of the 2007 blast in Glorietta, Makati City.

MANILA, Philippines – The Serendra blast on Friday, May 31, is not the first explosion involving an Ayala property.

Packed with crowds at past noon on Oct 19, 2007, a section of Glorietta 2 shopping center in Makati City exploded, killing 8 people on the spot and injuring more than a hundred. Three people later died in the hospital.

What caused the blast?

It depends on who you ask. For the police, the military and the government, a methane buildup at the basement of a restaurant had caused the explosion. But Ayala Land Inc insisted that it was the result of something more sinister – a bomb.

On the day of the explosion, the police confirmed that traces of the chemical compound RDX, the main ingredient of the military bomb C4, were found at the site. A day after, then Armed Force of the Philippines chief Hermogenes Esperon Jr was quoted as saying that the incident was a "terrorist act."

But days after the blast, the police retracted their statement. The initial findings of a National Bureau of Investigation team showed that the blast was not triggered by a bomb but by an accidental methane gas explosion.

Although the police confirmed the presence of RDX at the site, they said the RDX traces were "insignificant" and could not have caused the explosion.

A report from foreign experts called in by the police themselves later corroborated the NBI findings. Australian forensic experts declared “there was no evidence to suggest that the explosion had been caused and/or initiated by an improvised explosive device.” 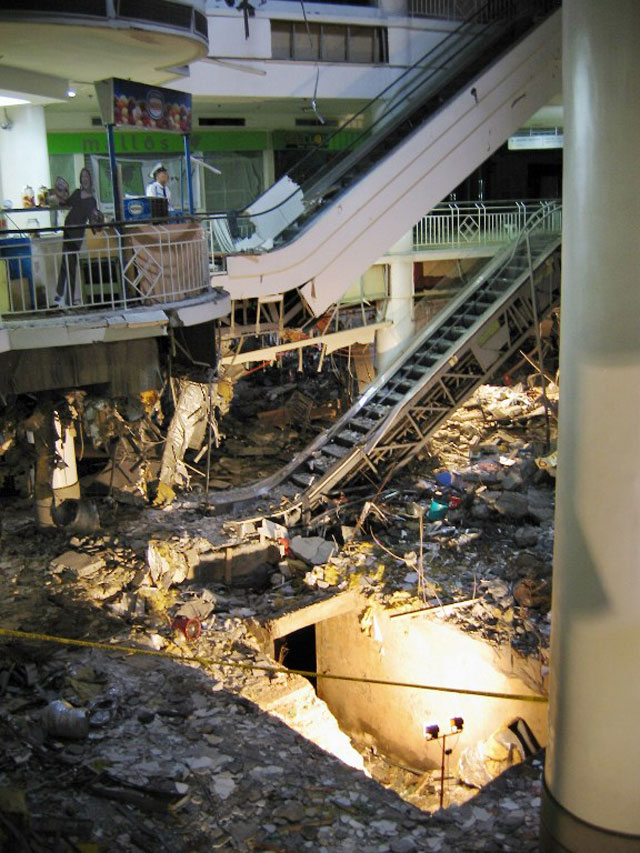 CRATER. The damaged Glorietta 2 in this 2007 file photo.

But another group thought otherwise. Ayala Land Inc brought in their own experts from the United Kingdom, who ruled that it was "highly unlikely" that methane of such quantities would be produced in a mall's basement.

Questions and doubts persisted. The government stood its ground, however.

Then something happened. Three years after the blast, a retired military officer executed an affidavit saying it was a bomb— not methane gas— that caused the explosion.

Retired Lt Col Allan Sollano, who was part of an Army team that trooped to Glorietta to investigate the blast right after the incident, claimed there were government efforts to cover up the incident.

Sollano said he recovered a plastic bag at the scene of the incident, which later tested positive for RDX.

As a result of Sollano's testimonies, The Department of Justice (DOJ) ordered the reopening of the probe.

In 2011, however, the final report of the DOJ special fact-finding panel sustained the PNP's earlier findings that the blast was caused by methane and not an explosive device.

The DOJ report found that Sollano's statements were "not worthy of credence." – Rappler.com