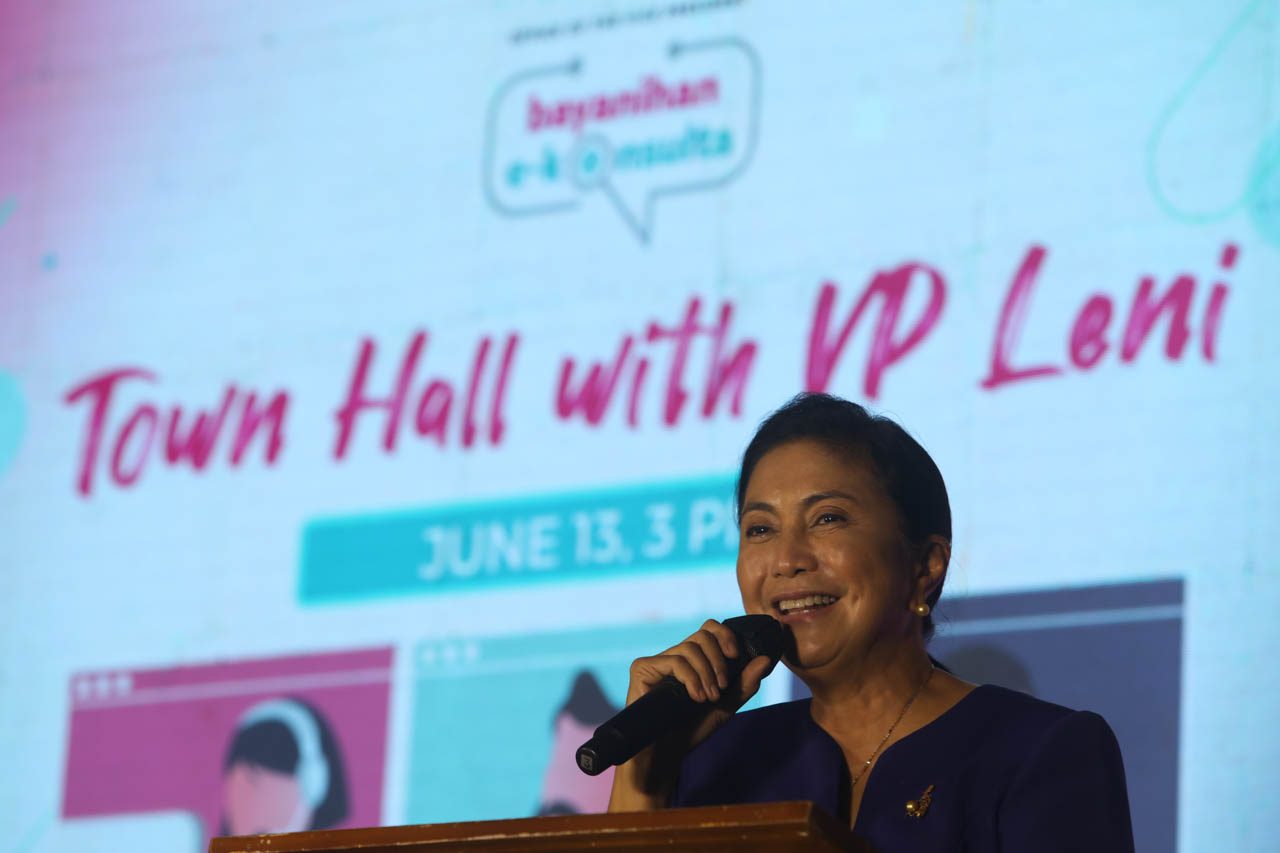 THANKSGIVING. Vice President Leni Robredo gives an inspirational message in the town hall meeting and thanksgiving for volunteers and staff who took part in her office’s Bayanihan E-Konsulta, held at the University of the Philippines Diliman’s Ang Bahay ng Alumni in Quezon City on June 13, 2022.

MANILA, Philippines – Outgoing Vice President Leni Robredo is planning to replicate her free telemedicine platform Bayanihan E-Konsulta to serve various localities across the country even beyond the coronavirus pandemic.

Robredo, who is set to step down from office on June 30, raised the possibility of further expanding and tweaking Bayanihan E-Konsulta during a town hall meeting and thanksgiving event for all volunteer frontliners and staff who took part in the project on Monday, June 13.

The Vice President wants to collaborate with her partners in tweaking the Bayanihan E-Konsulta model to set up localized telemedicine platforms serving different communities.

This teleconsultation platform will operate under the Angat Buhay non-government organization that Robredo is expected to launch by July 1.

(And I can only hope moving forward that perhaps we can developing something like Bayanihan E-Konsulta. In our localities, maybe we can tweak it so that moving forward, even without COVID-19, we can still do this program.)

This free teleconsultation platform on Facebook Messenger was Robredo’s brainchild, designed to help decongest hospitals when COVID-19 cases were surging.

Bayanihan E-Konsulta drew widespread praise for its efficient services despite it being run mostly by volunteers, who worked odd hours without salaries in order to help save lives. COVID-19 care kits were also given to patients, an initiative later copied by the Department of Health.

During the thanksgiving event, Robredo thanked the Bayanihan E-Konsulta team for all the sacrifices they had to make.

Before ending operations on May 31, Bayanihan E-Konsulta was able to serve a total of 58,000 patients with the help of 947 volunteer doctors and 1,761 call and chat agents.

Robredo earlier dubbed the Angat Buhay NGO potentially the “biggest volunteer movement” in Philippine history. She is banking on the dedication and hard work of her campaign supporters to continue her pro-poor and people-centered advocacy beyond the 2022 elections.

As an advocate for bottom-up, volunteer-led projects, Robredo also hopes the future projects of the Angat Buhay NGO would be a product of partnerships with her supporters and other groups.

(We also want an empowering kind of engagement, where the ideas don’t just come from us. We want to give a bigger space for the ideas of others.)

Robredo was riding on momentum in the final weeks of the presidential campaign, but she finished only in second place with over 15 million votes. It was a far cry from the 31 million that sealed the victory for president-elect Ferdinand Marcos Jr., the son of the late dictator who ran a well-oiled campaign that sought to evade scrutiny, backed by a vast disinformation network.

Though many of her supporters were heartbroken by the results, Robredo was quick to make plans for the future, telling them their fight for good governance, the truth, and democracy does not end in 2022.

The Vice President has since been spending her final days in office laying the foundations needed to run the Angat Buhay NGO. She and her team are also busy with transition proceedings with the staff of vice president-elect Sara Duterte, who was Marcos’ running mate. – Rappler.com