Robredo on Maria Ressa’s Nobel prize: ‘Courage in service of others’ HOLD THE LINE. Rappler CEO Maria Ressa gestures before giving a speech during the Nobel Peace Prize award ceremony at the Oslo City Hall in Oslo, Norway on December 10, 2021.

Facebook Twitter Copy URL
Copied
The Rappler CEO won the Nobel for carrying the truth forward 'in the face of harassment and abuse, and an entire ecosystem built to strip it of its power,' says Vice President Leni Robredo

MANILA, Philippines – Vice President Leni Robredo again honored Rappler CEO Maria Ressa for her historic Nobel Peace Prize, noting how the journalist’s battle for the truth was an honor for the world, and a source of pride for the Philippines.

“Maria was honored not only for telling the truth; she won the Nobel for carrying that truth forward in the face of harassment and abuse, and an entire ecosystem built to strip it of its power,” said Robredo in a statement on Saturday, December 11.

“In this, she reflects the highest ideals not only of journalism, not only of our people, but of all humanity: Courage in service of others,” she added. 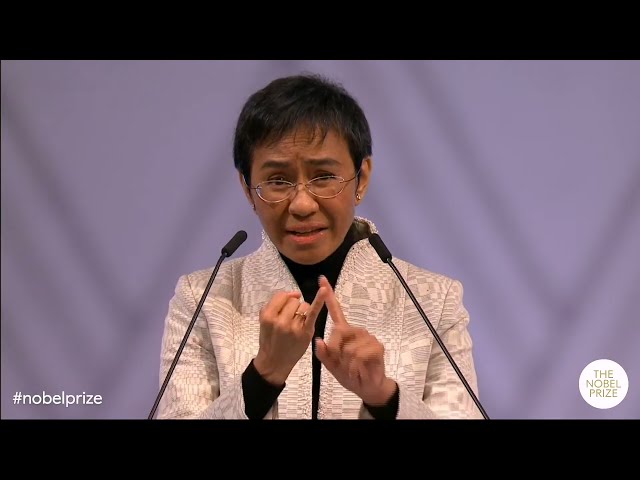 When the decision to award her the Nobel was announced on October 8, the Vice President was also quick to congratulate the journalist on social media.

In her first statement, Robredo said she applauded Ressa’s courage. “This is a recognition and affirmation of your tireless efforts to hold the line for truth and accountability.”

Meanwhile, it took days before Malacañang acknowledged the prestigious honor conferred to her. After “greeting” Ressa as the first Filipino to become a Nobel Peace Prize laureate in October, Presidential Spokesperson Harry Roque denied that press freedom was under attack in the country.

Like Ressa, opposition leader Robredo has been a target of disinformation attacks by pro-administration camps. While Robredo has slammed President Rodrigo Duterte’s controversial policies – including the crackdown on the free press – Ressa has been attacked for her media organization’s critical coverage of the Duterte adminstration.

Ressa is also a key figure in the global fight against disinformation.

She and Russian journalist Dmitry Muratov were awarded the Nobel Peace Prize “for their efforts to safeguard freedom of expression, which is a precondition for democracy and lasting peace.”

Ressa is the only woman in this year’s roster of laureates. – Rappler.com