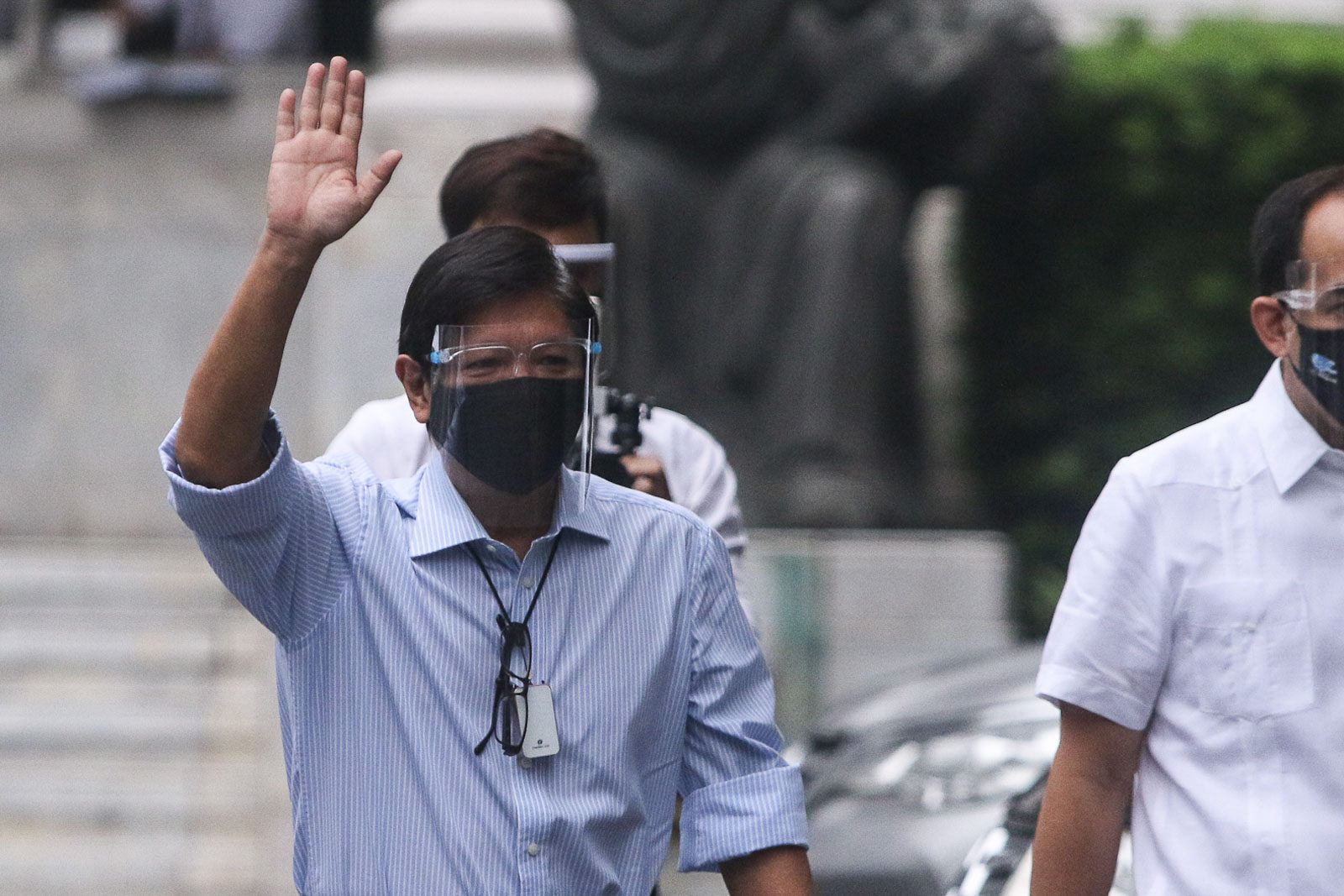 Former Senator Bongbong Marcos files a motion asking to inhibit Associate Justice Marvic Leonen from the proceedings of his election protest against Vice President Leni Robredo at the Supreme Court on Monday, November 9, 2020.

Lawyers of Vice President Leni Robredo called her rival Ferdinand “Bongbong” Marcos Jr a “spoiled brat” for once again pushing a Supreme Court (SC) justice to inhibit from the electoral protest he filed against Robredo.

In a statement on Monday, November 9, Robredo’s legal counsels Beng Sardillo and Emil Marañon did not mince words against the son of the late dictator Ferdinand Marcos, telling Bongbong his father’s reign of terror is over.

“May we remind Mr Marcos that it’s already 2020. This is no longer the period of his father’s reign of terror where they can do anything they want. Stop acting like a spoiled brat who cries when he doesn’t get his candy,” the lawyers said.

Hours earlier, Marcos and his lawyers physically went to the SC to file a petition seeking the inhibition of Associate Justice Marvic Leonen from the VP electoral protest, of which he is member-in-charge.

They want the High Court, acting as the Presidential Electoral Tribunal (PET), to re-raffle the case to a new member-in-charge.

Marcos argued Leonen is allegedly biased against him for the following reasons:

That Marcos now wants Leonen out of the case did not surprise Robredo’s lawyers.

They noted that the late strongman’s son had already done this two years ago against the former case lead, Associate Justice Benjamin Caguioa.

Marcos had accused Caguioa of partisanship because the SC magistrate was a former classmate of Aquino. But the PET junked Marcos’ petition, “sternly” warning him against making conspiracy theories.

“Pagod na kami na hanggang ngayon, pagkatapos manalo sa eleksyon at sa recount, patuloy pa rin ang panggugulo at pagsisinungaling ni Ginoong Marcos,” they said. (We are so tired because until now, even after we have won the elections and the recount, Mr Marcos continues to sow discord and spread his lies.)

The initial recount of votes in the 3 pilot provinces chosen by Marcos showed Robredo had even widened her lead over him by more than 15,000 votes.

Still, the PET did not dismiss the VP election case and instead moved forward with the 3rd cause of action in Marcos’ protest: his petition to annul the election results in Lanao del Sur, Basilan, and Maguindanao due to alleged widespread fraud.

The PET ordered the Office of the Solicitor General and the Commission on Elections to issues their comment on whether there were failures of elections in the 3 provinces.

The poll body said there was none, as all petitions for failure of elections there had been dismissed.

Meanwhile, Solicitor General Jose Calida – a known ally of the Marcoses – said the PET has the power to declare nullity of elections in an area, but it cannot hold special elections. – Rappler.com