A sea of pink greeted Iloilo City on Friday, October 8, as supporters of Vice President Leni Robredo organized a 300-vehicle strong caravan to show their support for her 2022 presidential bid.

Ilonggos for Leni organized the event, in partnership with different sectoral organizations in the city and province of Iloilo which had joined in the calls for the vice president to run for the chief executive post in the previous months.

The activity started with a morning mass at the Jaro Cathedral in Jaro district, which was attended by supporters, who were clad mostly in pink and blue attire, colors Robredo used in her declaration speech on October 7. 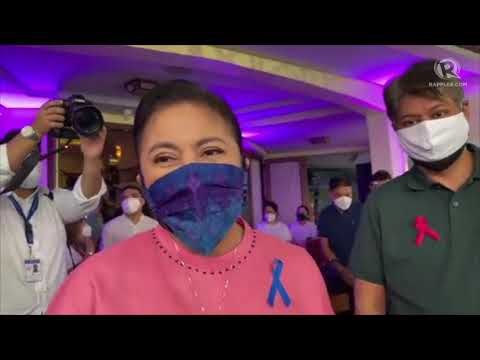 A caravan which started in Mandurriao district and, travelled through major roads of Jaro, La Paz, city proper, Molo, and Arevalo districts.

Juliana Pelaez, a 67-year-old retired nanny who supported the vice president since she ran in 2016, was super ecstatic when the caravan went by.

Her whole household conducted a “Pink Flag Ceremony” to commemorate the occasion, with her wearing a pink shirt over her duster to greet the participating vehicles passing by.

Pelaez told Rappler that she was initially leaning toward choosing to support between Isko Moreno and Manny Pacquiao in the upcoming polls, but easily stuck to Robredo when she announced her candidacy.

She said she would actively campaign for the vice president by talking to her high school batchmates and other friends. “I was so happy because she is my candidate. She has always been my vice president. I really like her because she is such a humble and an educated kind of woman, and she is so nice,” Pelaez said.

Rappler also spoke to two people who joined in the caravan.

Phaul Rey Tolentino, a law student at the University of San Agustin, said he joined the caravan mainly to go out and show a very strong support for Robredo beyond the online spaces.

Together with other youth volunteers, he had been organizing support through online group chats to get their message on the ground and drum up even more support.

He said he admired her performance as vice president, stretching beyond her constitutional mandate.

“It’s because of her performance as the vice president. Despite the limitations of her office, she was able to perform more than her job description. Her character is commendable. We need to bring back the decency in our government,” said Tolentino.

Lovelyn Quimba Losaria, a Sangguniang Kabataan chairperson from Lambunao town, said that she wanted show her full support to manifest her belief in Robredo and what she could do as president.

Losaria also said that this was only the first of many ground works that she will be doing for the vice president.

“It is because I see hope in her, a leader who is competent and has advocacy, compassion, and clear vision for her people. Bilang kabataan, mas maayo gid ipakita ta aton suporta sa tawo nga deserving  and worthy sang aton boto kaysa mahimuyong lang kita and live with regrets at the end of the day,” she said.

(It is because I see hope in her, a leader who is competent and has advocacy, compassion, and clear vision for her people. As members of the youth, it is better for us to show our support to the person who is deserving and worthy of our vote instead of just sitting idly by and live with regrets at the end of the day.) Ilonggos for Leni spokesperson Ariel Castañeda told Rappler that the mass and caravan were planned only within 36 hours but was able to dig up a “spontaneous movement” that swelled to 300 vehicles.

Castañeda added that the support for Robredo in Iloilo was not only for the vice president herself, but also an expression of frustration at the current government’s management, especially with the coronavirus disease 2019 (COVID-19) pandemic response.

“It was a spontaneous movement within 36 hours after we heard she had accepted [1Sambayan’s] nomination, and she was going to file her candidacy as president. Unbelievably, a lot of people responded to the invitation,” Castañeda said.

He also stated that their movement for Robredo will be a “people-initiated movement” which will continue to seek out more volunteers and more supporters in the coming days. – Rappler.com