Robredo to push for anti-endo bill ‘acceptable’ to both workers, employers 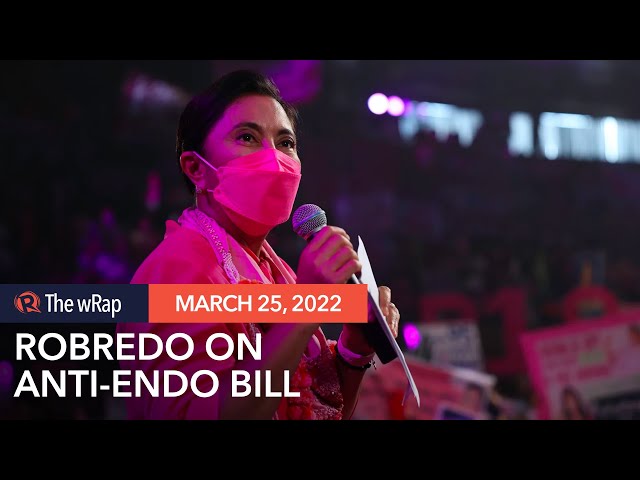 MANILA, Philippines – In her bid to stop the end-of-contract scheme or endo in the country if she becomes president, Vice President Leni Robredo said she would push for a version of the security of tenure (SOT) bill that is “acceptable” to both employees and employers, especially for the sake of micro, small, and medium enterprises (MSMEs), which make up 99.5% of operating businesses in the Philippines.

(If I become president, I will invite representatives of labor and employers to sit down at one table and come up with a version that is acceptable to them both.)

The Vice President gave this answer to a question premised on MSMEs. One PH journalist Cheryl Cosim asked how Robredo would balance job creation and business incentives, given that many MSMEs may not be on board with contractualization due to possible losses. MSMEs employ about 63% of the country’s workforce.

Robredo looked back at President Rodrigo Duterte’s 2019 veto of the SOT bill with regret as it could have been a good “first step” to ending contractualization in the country.

Duterte vetoed the bill in 2019, despite also committing to end endo, as business groups claimed that the passage of the bill may result in job losses.

Robredo said, on the other hand, that she would certify the SOT bill as urgent if elected president.

“Nasayang ako actually nito, kasi mahalagang first step sana siya, kasi di naman cast in stone na hindi pwedeng i-amend at a later time. Pero to be able to have a security of tenure bill will give the employees the protection that they need, siguro hindi ito 100%, pero meron nang gains,” she said.

(I saw this as a waste, because it could have been an important first step. It’s not like the law is cast in stone and cannot be amended at a later time. But to have a security of tenure bill assures employees of the protection they need, perhaps not at 100%, but there would be gains.)

“Endo” means end of contract, a term referring to schemes where workers are hired for a fixed period. Instead of regularizing workers which would entitle them to benefits and the power to unionize, companies just rehire them as contractual workers.

Robredo’s reaction mirrors that of labor groups who, just before Duterte vetoed the bill, pushed him to pass it despite seeing it as a “watered down” version.

Various labor groups had rejected the version of the anti-endo bill that chambers of Congress passed and reached Duterte’s table, saying it failed to address key issues. However, Federation of Free Workers (FFW) president Sonny Matula said the SOT bill was better than nothing, and that it could still be improved further.

Matula now is now running for senator under Robredo’s slate.

Robredo said that employees and employers should not be viewed as conflicting forces, but as “partners in development.”

(Employees have needs that we must address because this is their livelihood… We must listen to employers as well, because the sustainability of businesses is important.)

Robredo said the version of the bill that passed Congress was “lacking,” but she understood that it turned out that way because of compromises from the relevant stakeholders.

The Vice President said that the bill must clearly outline labor definitions, and which among them are allowed and prohibited. An example is the need to differentiate between the exploitative labor-only contracting from manpower agencies, and the lawful job-contracting.

[OPINION] Contractualization and the rights of workers

Experts have flagged that business groups’ push to keep contractualization to allow capitalists to increase their profits, hire more workers, and contribute to economic growth. This is “self-serving” and “wrong.”

“By allowing capitalists to intensify their exploitation of workers, contractualization actually enables capitalists to pay workers less for the same work, stunt economic development, and therefore harm the interests of all Filipinos – including of capitalists themselves,” sociology professor Herbert Docena said in a 2016 analysis.

In November 2021, Robredo signed a pact with labor leaders, committing to work towards ending contractualization and investigating the killings of trade unionists should she become the next Philippine president.