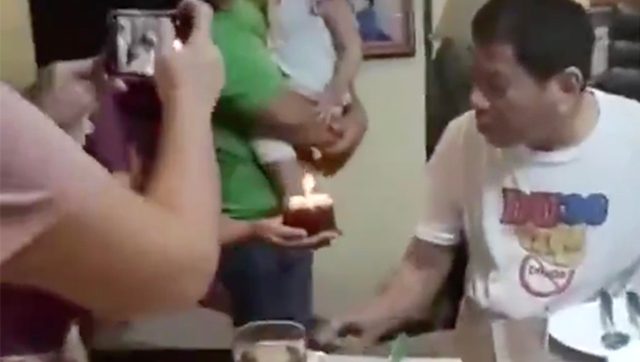 BIRTHDAY CONTROVERSY. President Duterte attempts to touch a woman Malacañang says is a longtime maid during his birthday celebration.

Malacañang again defended Philippine President Rodrigo Duterte over his gesture to touch a woman captured in a video of his 76th birthday celebration, a behavior panned by critics as another show of lewdness and tendency to objectify women.

In a video that has now gone viral, Duterte can be seen in his Davao City home, eating a meal in the company of family members and househelp. As a woman brings him a small birthday cake, the President attempts to touch the woman roughly in the area of her private parts.

TRIGGER WARNING: Sexual harassment. May not be suitable for all audiences

The woman and Duterte were laughing but the woman also evaded the President’s hands.

Presidential Spokesman Harry Roque on Monday, March 29, defended Duterte, claiming there was “no malice” in the act because the woman was a longtime househelp used to the Chief Executive’s sense of humor.

Roque then said Duterte’s action should not bother anyone because Honeylet Avanceña, the President’s partner, was present when it happened.

“Alam mo naman talagang palabiro ang ating Presidente, pero wala pong malisya ‘yun dahil nakaharap naman po doon si Ma’am Honeylet,” said the Duterte spokesman. (You know that the President is fond of jokes, but there was no malice there because Ma’am Honeylet was there.)

If anyone should complain, it should be the people in his household, not critics, continued Roque.

Duterte has claimed he molested a maid

Duterte, two years ago, claimed he had molested his family’s maid while she was sleeping back when he was a young man.

The Safe Spaces Act (also known as the Bawal ang Bastos law) punishes unwanted sexual advances and other forms of sexual harassment and slurs in workplaces, apart from in public places, schools, and online spaces.

Ironically, Duterte signed that law himself. However, he had also signed Davao City’s Magna Carta for Women but then violated it when he himself wolf-whistled at a reporter during a live press briefing back in 2016.

In 2018, Duterte had kissed on the lips a female overseas Filipino worker in South Korea onstage during an official event.

Earlier this month, Women’s Month, Duterte’s office issued a message that aimed to bolster his image as someone who stands up for women empowerment.

Duterte said in that message: “We can nonetheless proudly claim that concrete, sustainable, and inclusive actions have been taken by our government to create an environment where women’s rights are respected and their contributions to society are recognized.”

Duterte, only two months ago, declared that women are not fit for the Philippine presidency.

He has also joked several times about rape and made sexually-violent and inappopriate remarks like threatening to shoot female communist rebels in the vagina and offering Filipina virgins to foreign tourists.