STILL WORKING. Presidential Spokesman Harry Roque holds his press briefing from the Philippine General Hospital where he is confined for COVID-19. 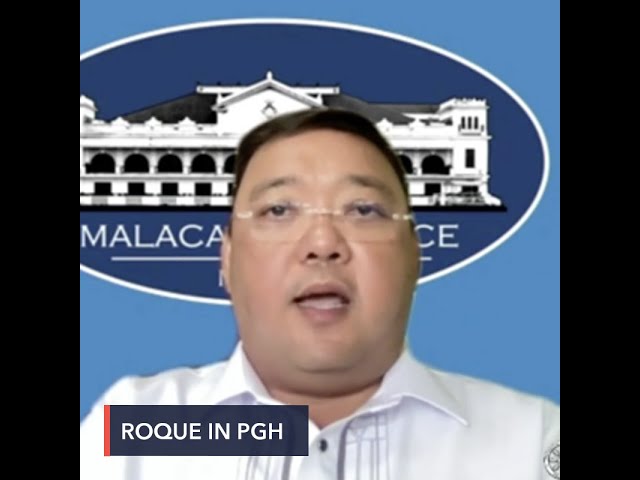 Presidential Spokesperson Harry Roque took exception to a reporter who asked why he managed to get confined in the Philippine General Hospital (PGH) for his COVID-19 reinfection when others with worse symptoms were still in line.

Roque, who held his regular press briefing on Monday, April 12, from his PGH room, said, “I think that’s an unchristian question.”

(My assurance is that under the administration of President Duterte, all persons who have medical needs will be given assistance and that is also because of the universal health care law I championed in the 17th Congress.)

Asked by Rappler what symptoms merited his confinement in PGH, Roque said, “I started my isolation at home but my oxygen level fell to 90.”

The normal level for oxygen in the blood is 98% for nonsmokers. Health department spokesperson Undersecretary Maria Rosario Vergeire previously said that it’s when a person’s oxygen level goes below 90 that they are advised to seek confinement.

“Our experts say that when oxygen level is below 90 already, you need to seek consultation in a higher facility, like a hospital,” she said in a mix of Filipino and English, about general situations, not specifically about Roque.

Roque has also said he has comorbidities which could make him eligible for confinement.

Doctors who spoke with Rappler have said the line of people seeking a bed in PGH is still long. In some cases, these individuals likely have severe symptoms and were referred to PGH by doctors who believe they require hospital admission.

Roque has so far managed to hold two virtual news briefings while confined in PGH, the first one held just on Sunday, April 11.

He said this was to send a message to Filipinos that they should not allow themselves to be defeated by the virus.

(Though I am confined in the hospital, because I can still work, I decided to just discharge my duties and also because this is my message to our countrymen: though we may slip due to COVID, let’s not allow ourselves to fall.)

The Duterte spokesman is set to push through with his press briefing on Tuesday, April 13. The format of these briefings have been tweaked for the week, supposedly to make it easier for a recovering Roque.

No reporters are allowed to ask questions live. All reporters’ questions are to be send to Malacañang communications staff to be relayed on air to Roque by a moderator. – Rappler.com