Facebook Twitter Copy URL
Copied
If they win, Sara Duterte will not be in a hurry to succeed Leni Robredo given that the Davao mayor could have sought the presidency but chose to run for vice president instead, says Albay Representative Joey Salceda

CAGAYAN DE ORO CITY, Philippines – Organizers of the Leni Robredo-Sara Duterte 2022 (RoSa) movement on Monday, March 21, rejected the idea that a Robredo presidency with the Davao mayor as vice president would plunge the country into another political crisis.

During the launch of the RoSa 2022, Representatives Joey Salceda of the 2nd District of Albay and Rufus Rodriguez of the 2nd District of Cagayan de Oro, and Zamboanga Mayor Maria Isabelle Climaco said it was unlikely that Duterte would be involved in any destabilization plot through impeachment even if the next Congress is dominated by allies of her family.

“Our Constitution has set the grounds for impeaching a President, and it is not that easy to oust a sitting President. On what grounds?” Rodriguez said. 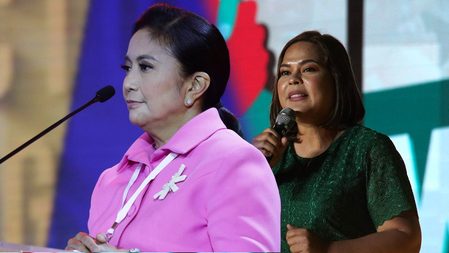 If they win, Salceda said, Mayor Duterte would not be in a hurry to succeed Robredo given that she could have sought the presidency in this year’s elections but chose to run for vice president instead.

“It is not her nature. She could have been the front runner if she decided to run for President, but she did not,” Salceda said.

For her part, Climaco said she was confident that Robredo and Duterte would work together as a team, and their being women and mothers could spell the difference in their governance.

Sacelda, Rodriguez, and Climaco launched the RoSa 2022 campaign to elect Robredo and Duterte as the country’s next leaders.

The Robredo and Duterte combination is a strange mix in that they are running under two warring tickets.

Robredo’s running mate is Senator Francis “Kiko” Pangilinan while Duterte is with a group that has the late dictator’s son and ex-senator Ferdinand “Bongbong” Marcos Jr. as the standard-bearer. Rodriguez said he had informed Marcos of his decision to support Robredo and Duterte.

“He was not hurt by our decision,” he said.

Salceda said he did not feel any guilt since he never supported Marcos, to begin with. He said he would have supported Duterte had she sought the presidency.

Climaco, for her part, declined to speak about Marcos but explained that she bonded with Robredo and Duterte on several occasions years ago.

She said she and Robredo both served as congresswomen together. She and Duterte also participated in a US State Department program years ago.

The three led a rally in the city in support of Robredo and Duterte in the same area where Vice President Robredo held hers in Divisoria, Cagayan de Oro, in February.

But the crowd at the RoSa 2022 rally paled in comparison to the Robredo rally that drew a crowd of thousands. The ROSA 2022 rally only had more than 1,000 participants. – Rappler.com