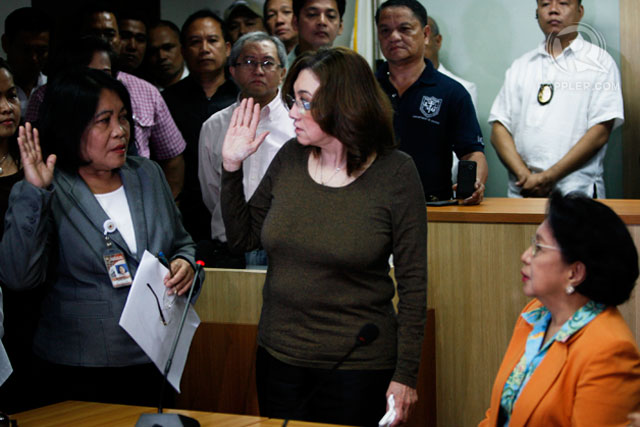 OATH. Ruby Tuason takes her oath at the Office of the Ombudsman on Friday, February 7.

MANILA, Philippines – It's the "slam dunk" testimony that the administration said will tie up the loose ends and complete the story of the whistleblowers in the multi-billion pork barrel scam saga. (READ: DOJ: Tuason testimony 'slam dunk' vs Estrada, Enrile)

In her affidavit submitted to the Office of the Ombudsman, scam-suspect-turned-witness Ruby Tuason picks up from the testimony of whistleblower Benhur Luy and brings the money trail straight to senators Juan Ponce Enrile and Jinggoy Estrada.

According to a report in the Philippine Daily Inquirer, which obtained the affidavit that Tuason submitted to the Ombudsman Friday, February 7, Tuason revealed how she met alleged pork barrel scam mastermind Janet Lim Napoles and how "Napoles asked that she be introduced to Estrada and other politicians."

Tuason said she met Napoles because Napoles was a potential buyer of the Tuasons' house in Bel-Air Village in Makati.

So close was Tuason to the Estradas that when Jinggoy ran for a second term in the Senate in 2010, Ruby gave a generous donation of P2 million, according to Rappler's research. Jinggoy Estrada confirmed that Tuason was a campaign donor.

In the Inquirer story, Tuason revealed the many ways she personally met with the senators to deliver their kickbacks — to Estrada's office in the Senate and to expensive restaurants where she met Enrile and his former chief of staff Gigi Reyes. (READ: The 'Boss' and Gigi Reyes)

“I personally delivered all the shares of Sen. Jinggoy Estrada and when I delivered in his office at the Senate I was instructed to pass through the entrance to the senator’s parking space so that my bag containing the money will not be opened,” the Inquirer report quoted Tuason's affidavit.

Estrada however said Tuason was merely trying to escape punishment at his expense. (READ: Jinggoy to Ruby Tuason: Stick to facts)

Enrile's kickbacks really goes to Reyes, Tuason said, but the senator joined them in meetings usually held in expensive restaurants. “I remember occasions that Enrile would join us when we were almost done for a cup of coffee, and sometimes he would just come to pick up Gigi,” the Inquirer quoted Tuason as declaring in her affidavit.

Tuason confirmed Luy's claim that "Enrile and Estrada received a 40-percent commission—minus 5-percent “withholding tax” for Napoles—for every project funded by their pork that they assigned to Napoles’ dummy NGOs."

In her affidavit, Tuason said she acted as "conduit" for the kickbacks from 2004 to 2008. She was supposedly cut off from the transactions "after Reyes and Estrada became personally known to Napoles."

“Estrada appeared to have directly dealt with Napoles because money intended for delivery to him was received by his secretary and no longer by me,” the Inquirer quoted Tuason.

Reportedly due to pressure from her family, Tuason's camp got in touch with the justice department in January, according to Justice Secretary Leila de Lima. After a series of talks, De Lima sent a team from the National Bureau of Investigation to California on February 4 to accompany Tuason in her return to Manila. She arrived February 7. – Rappler.com