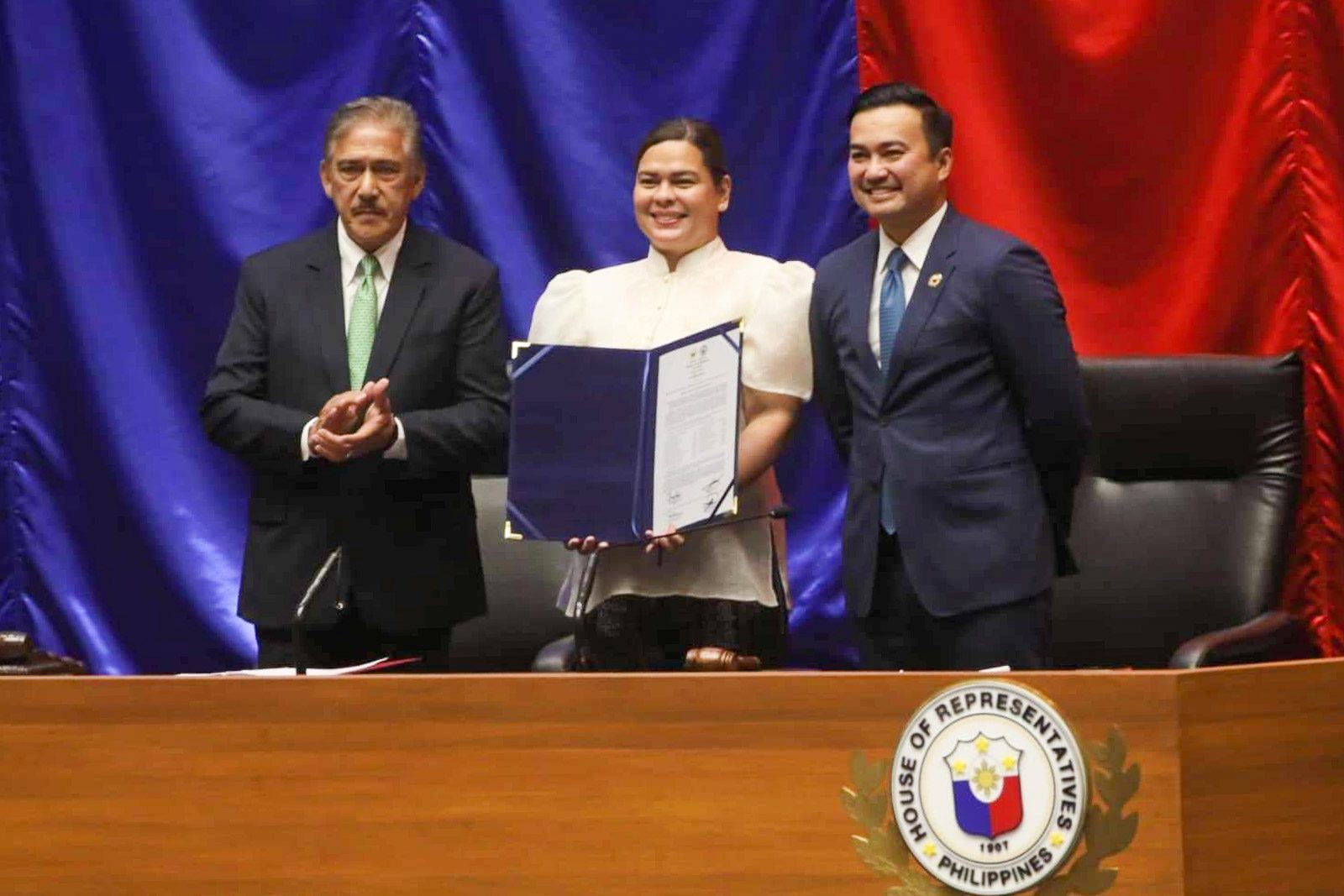 Senate President Vicente Sotto III and House Speaker Lord Allan Velasco proclaims Sara Duterte-Carpio as Vice President-elect during a ceremony at the House of Representatives on May 25, 2022. Rappler

Facebook Twitter Copy URL
Copied
(1st UPDATE) The vice president-elect is set to take her oath on June 19, 11 days ahead of the start of her term

MANILA, Philippines – Eleven days before her term begins, vice president-elect Sara Duterte will be sworn into office during a ceremony and concert in her hometown, Davao City.

Duterte, the outgoing mayor of the city, will be sworn into office by Supreme Court Justice Ramon Paul Hernando, a San Beda law alumni. Duterte, a lawyer, studied law in San Beda College but graduated from San Sebastian College-Recoletos.

In 2016, for instance, Duterte’s predecessor, outgoing Vice President Leni Robredo, was sworn into office by two barangay captains – Ronald Coner, who headed the smallest and poorest barangay under her former district in Camarines Sur; and Regina Celeste San Miguel, the captain of the Quezon City barangay where the Office of the Vice President is located.

San Pedro Square, at the intersection of San Pedro and Bolton streets in downtown Davao City, will be shut down to vehicles starting June 18. Those with vehicles are told to take other routes and to “expect heavy traffic” during the June 19 weekend.

A huge part of of San Pedro and most of Bolton Streets will be shut down and used as areas for guests. LED walls will be placed throughout San Pedro Street. The event is open to the public with gates opening at 2 pm on June 19, with a separate area for PWDs, senior citizens, and visibly pregnant women. COVID-19 tests are not required for the general public, but face mask wearing will be required.

Following her “inaugural ceremony,” set to begin at 4:30 pm, artists who had endorsed Duterte and her standard-bearer, president-elect Ferdinand Marcos Jr., will perform in a “pasasalamat” or thanksgiving concert.

Buses will also be going around the city to take the public from key points to San Pedro Square. The following routes will be in place, with specific pick-up points to be announced later:

In a press statement, Duterte’s team said there will be “no presscon or interview” with the vice president-elect during the program “to give way to the public photo opportunity.”

(We encourage everyone to follow what the police will implement especially during that day. Please avoid prohibited activities, don’t wear a jacket, don’t bring bladed weapons and others, just follow the police implementation and the Task Force Davao.)

Duterte is the daughter of outgoing President Rodrigo Duterte. She and president-elect Marcos are the first majority president and vice president since democracy was restored in 1986 and are the first tandem to win the elections since 2004, after Gloria Arroyo and her running mate, Noli de Castro.

The pair won the 2022 elections on the promise of “unity” and under the “Uniteam Alliance,” a coalition of the oldest clans in Philippine politics.

Marcos himself is the son and namesake of the late dictator Ferdinand Marcos, whose ouster in 1986 led to the restoration of democracy in the Philippines.

Duterte is set to be Marcos’ education secretary, although she had previously expressed her desire for the defense portfolio. The vice president-elect is expected to attend Marcos’ inauguration at the National Museum on June 30.

Even as the second Mayor Duterte is set to take on a national post, another Duterte will be taking over Davao City hall. Sebastian Duterte, the current vice mayor and youngest son of President Duterte, was elected mayor in the 2022 polls. Another Duterte sibling, Paolo, represents the city’s 1st District in Congress.

The transition process from the outgoing vice president, Leni Robredo, and Duterte’s team, has already begun. Robredo ran as president in the 2022 polls but lost by a wide margin to Marcos. – With a report from Loreben Tuquero/Rappler.com