Pilar College has prohibited its female Muslim students from wearing the traditional hijab in the school premises. The city council has passed a resolution questioning the policy, but the Catholic school has stood firm in its decision.

Most Muslim women wear the veil to practice their faith, although its use has been a fodder for controversy. In 2010, France passed a law banning the use of Islamic veils in public places.

While predominantly Catholic, Zamboanga is host to a large Muslim community and serves as the commercial and trading gateway for Muslim-dominated provinces such as Basilan, Sulu and Tawi-Tawi. It's also host to a large Catholic university, the Ateneo de Zamboanga, which allows its female Muslim students to wear Islamic veils.

In a July 9 letter to Mayor Celso Lobregat, Sister Maria Nina Balbas, president of Pilar College, confirmed that the school is implementing the ban. “Our origin is Roman Catholic and we cannot deviate from that origin," Balbas said. "It is true we cater to students of different religions, but before they are officially enrolled, during interviews of student applicants, rules and regulations are explained to them particularly the non-wearing of the hijab or veil."

Balbas invoked academic freedom, saying that by enrolling at Pilar College despite the restriction, students are deemed "to have agreed to the rule." One of the oldest academic institutions in Western Mindanao, the school has more than 3,000 students.

Alih S. Aiyub, secretary-general of the National Ulama Conference of the Philippines in Western Mindanao, said the policy violates a student's basic right to practice religion. “We are asking them to comply with existing laws because their policy [violates] human rights," he told Rappler.

An online campaign that targets to gather 1 million signatures calls for a boycott of Pilar College. Rappler tried to get the side of Pilar College but the school representative refused to talk about the issue. 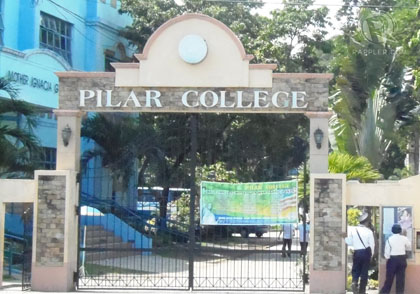 ACADEMIC FREEDOM? Pilar College bans the use of the veil in school premises.

Edilwasif Baddiri, commissioner-in-charge of legal at the National Commission on Muslim Filipinos (NCMF), urged the school to review its policy. “It is a violation of the Free Exercise Clause of the 1987 Philippine Constitution and Section 32 of Republic Act No. 9710, The Magna Carta of Women,” he said.

Baddiri added that a Department of Education Order No. 53 in 2001 issued by then Secretary Raul S. Roco states the following: "In the specific case of Muslim students, the following policies shall be adopted: a. Female Muslim schoolchildren should be allowed to use their veil or headdress (hijab) inside the school campus."

Baddiri said Pilar College must lead in upholding the laws of the state.

In a phone interview, Rosemarie R. Trajano, secretary-general of the Philippine Alliance of Human Rights Advocates (PAHRA), urged Pilar College to hold a dialogue with its students.

“We acknowledge the policy of the institution. However, it should not go beyond the freedom of religion. The right to practice religion should be treated as a paramount principle,” she said. - Rappler.com