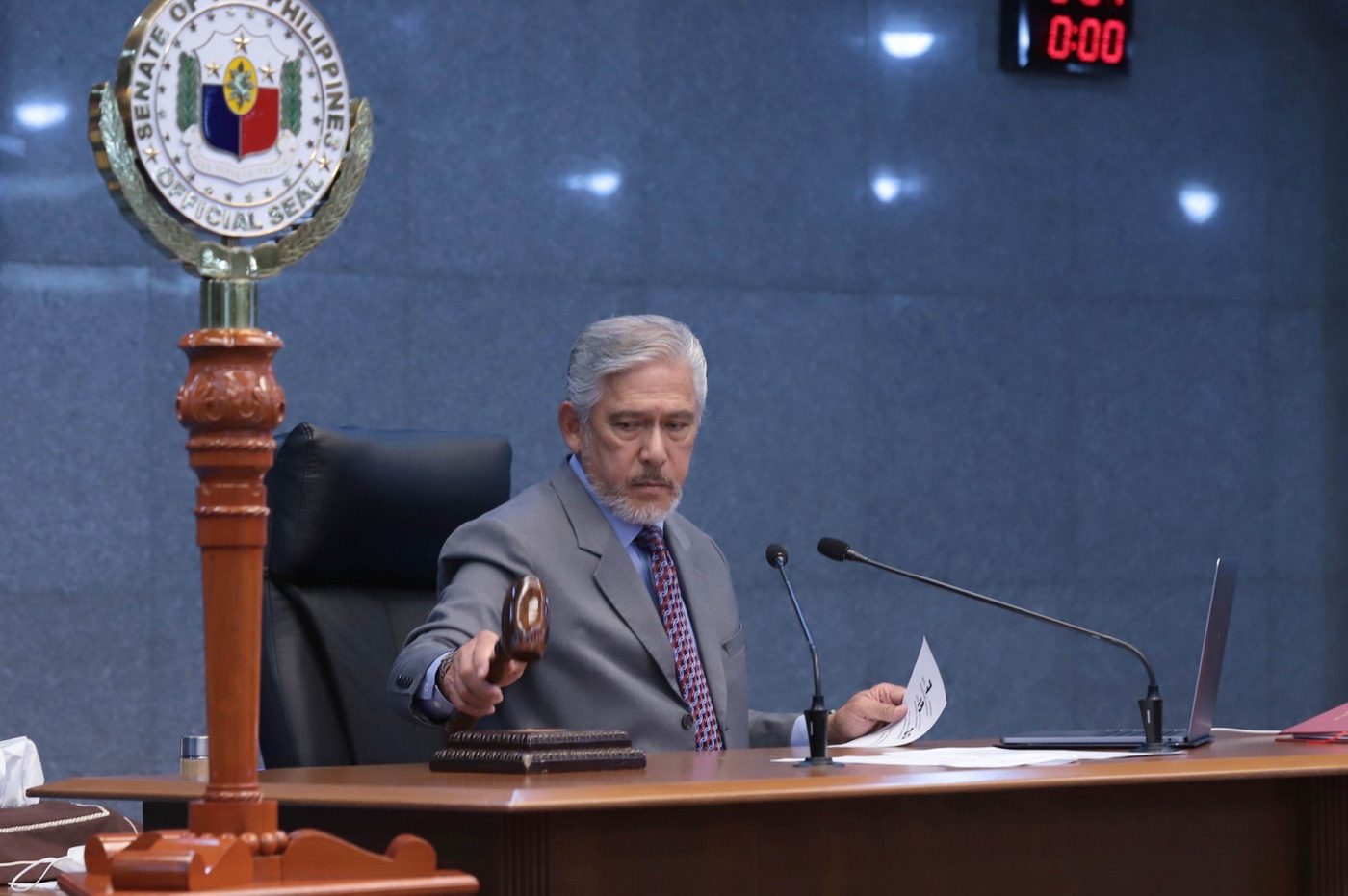 Even after the leadership shakeup at the House of Representatives, senators said they still worry the 2021 national budget bill won’t be submitted to them on time, and asked their House counterparts to hand over to them the proposed measure on October 28 at the latest.

“If the House of Representatives’ transmittal of the General Appropriations Bill (GAB) to the Senate will be on November 5 or 6, there is no assurance that we can pass the budget on time and thus avoid a reenacted budget,” Senator Panfilo Lacson said on Friday, October 16.

During plenary session the previous night, Senate President Vicente Sotto III said he was told by “somebody from the House that they are only submitting [the GAB on] November 5.”

This, despite the House committing to pass the budget bill on 3rd and final reading on Friday.

“That’s the same proposal by [former] Speaker Cayetano. If that’s the case, we’ll still be delayed [in passing the GAB],” Sotto added.

Late Thursday night, Sotto said he spoke with House Speaker Lord Allan Velasco to request that he “facilitate the transmittal” of the GAB to the Senate by October 28, more than 10 days after the bill’s 3rd and final reading on Friday. He said 10 days should be “enough time” to print copies of the bill.

“As they have promised the President, they will approve the GAB on 3rd and final reading today, October 16, and it only takes one week to print, so why November 5?” Lacson said in a statement.

If the House starts printing the voluminous budget bill immediately after its passage on Friday, it should be able to submit official copies to the Senate next week or on the last week of October, senators said.

Upon receipt of the GAB, senators and their finance subcommittees need about 14 days to study it and come up with their own version of the budget bill, which would then be taken up in plenary sessions.

“Not only is the delay unacceptable. It is difficult to understand, unless there are plans to amend the bill after the 3rd reading,” Lacson added.

Lacson then reminded the House leadership that the 1987 Constitution prohibits amending a bill after its last reading by a chamber of Congress.

“They cannot present a printed copy on 3rd reading because they will amend it – that’s their practice,” Senate Minority Leader Franklin Drilon told his fellow senators during Thursday night’s plenary session.

“Between approval on 3rd reading and November 5, they will do the amendments,” Drilon added.

Marikina 2nd District Representative Stella Quimbo told the ABS-CBN News Channel on Friday that the House does plan to make amendments after the GAB’s passage on 3rd and final reading.

If the Senate receives the House’s approved budget bill on November 5 or 6, it will take until around December 14 to 16 to get the Senate’s version of the bill through interpellations and amendments, Lacson said.

After that, the two versions of the bill will be reconciled in a bicameral conference and then ratified by both chambers. Only then will it be submitted to Malacañang for its own study, and the President’s signature or veto.

To fast-track work on the 2021 budget bill and other priority measures, the Senate will resume session on November 9 instead of on November 16, Sotto announced on Thursday night.

Lacson and Sotto earlier said senators would not compromise by skimming through the budget bill’s provisions just to hurry it along. Exhaustive scrutiny is the Senate’s job because, unlike House members, senators have no “parochial concerns,” that is, they are not only looking after individual congressional districts, Lacson said.

Senators raised alarm last week after then-Speaker Alan Peter Cayetano suspended session at the House on October 6, a week earlier than scheduled. The move, in effect, postponed the House’s 3rd and final reading of the GAB from October 14 to November 16, when Congress resumes session after a monthlong break.

Sotto and Lacson then warned that the delay would leave the Senate too little time to work on the budget bill, putting the government at risk of having to reenact the 2020 national budget for 2021.

Unlike the 2021 budget bill, the 2020 budget is not responsive to the COVID-19 pandemic. Reenacting it for the coming year would strain government efforts to address the health and economic crisis caused by the pandemic.

Cayetano’s early suspension of the House’s session was seen as a ploy to prevent his rival, Velasco, from taking over the speakership. President Rodrigo Duterte however called on Congress to hold a special session from October 13 to 16 so the House could resume its work on the budget bill.