Increased funds for calamity response and health programs, including the fight against COVID-19, will be the priority when the Senate holds plenary debates on the proposed 2021 national budget, Senator Sonny Angara said on Tuesday, November 10.

Angara, chairperson of the Senate finance committee, sponsored the P4.506-trillion 2021 General Appropriations Bill (GAB) at the Senate plenary on Tuesday afternoon. This signaled the beginning of the Senate’s plenary discussions on the budget bill. 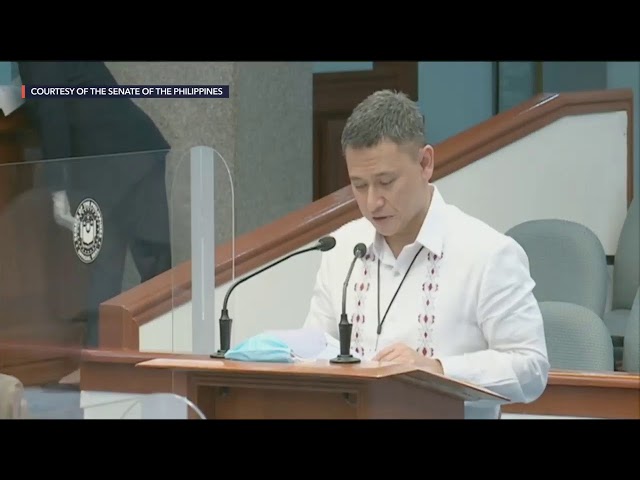 The first debates are set for Wednesday morning, November 11. Angara told reporters on Tuesday that he expects marathon sessions to cover the budgets of all government agencies and pass the Senate version of the GAB as early as November 23. However, deliberations may spill into December and push back the bill’s passage.

The Senate finance committee held preliminary budget hearings over the past two months and studied the House of Representatives’ version of the GAB since it was handed over to the Senate on October 27.

Off the bat, the Senate saw the need to increase allocations for health programs, the government’s response to the pandemic, and recovery from natural disasters.

The Senate finance committee report on the 2021 GAB – the Senate’s initial version of the budget bill – includes a total P18-billion fund for COVID-19 vaccines. This is much higher than the P2.5 billion originally allotted by the executive. However, P10 billion of this fund is “on standby” – depending on the availability of vaccines, funds will be reallocated for their purchase.

The House version increased the budget for COVID-19 vaccines from P2.5 billion, as proposed by the executive branch, to P8 billion.

The Senate version of the budget bill augments several programs under the Department of Health, including the hiring of more medical frontliners and the provision of personal protective equipment for them.

The measure retains the P113.8-billion allotment for conditional cash transfer or the Pantawid Pamilyang Pilipino Program for some 4.4 million poor families, Angara said. It also allows for the “full resumption” of construction projects under the Build, Build, Build program.

These, Angara said, are largely geared at cushioning the adverse economic impact of the COVID-19 pandemic. Senator Imee Marcos will propose a more general cash assistance program for 2021, Angara added.

Senator Grace Poe proposed allotting P5 billion for service contracts with jeepney drivers displaced from their work by the pandemic.

Senate to start 2021 budget bill homestretch: What are the steps? The committee report on the GAB also contains provisions for the Doktor Para sa Bayan medical scholarship bill, and for the increase of public school teachers’ yearly supplies allowance from P3,500 to P5,000 – both measures recently passed by the Senate.

The allocation for the National Disaster Risk Reduction and Management Council and the Quick Response Funds in the 2021 budget bill, at P27.25 billion, is larger than the P22.8 billion in the 2020 national budget.

Still, Angara said the senators see the need to further increase calamity funds in the national budget. However, he said any such increase will not be taken from the P19.1-billion budget of the National Task Force to End Communist Local Armed Conflict (NTF-ELCAC), the executive branch’s Cabinet-led committee aimed at stamping out the communist insurgency.

Minority senators Franklin Drilon, Risa Hontiveros, and Francis Pangilinan earlier called for the realignment of some or all of the NTF-ELCAC’s “Barangay Development Fund” to programs for the recovery of typhoon-hit communities.

Drilon, the minority leader, said the Senate minority will argue for this realignment during plenary debates on the budget bill.

Angara, Senate President Vicente Sotto III, and Senator Panfilo Lacson opposed touching the NTF-ELCAC’s budget. They echoed President Rodrigo Duterte in saying that the need to end the communist insurgency is urgent and must be a top priority in the 2021 national budget.

However, Angara said the Senate is “not closing the door on any arguments.” – Rappler.com