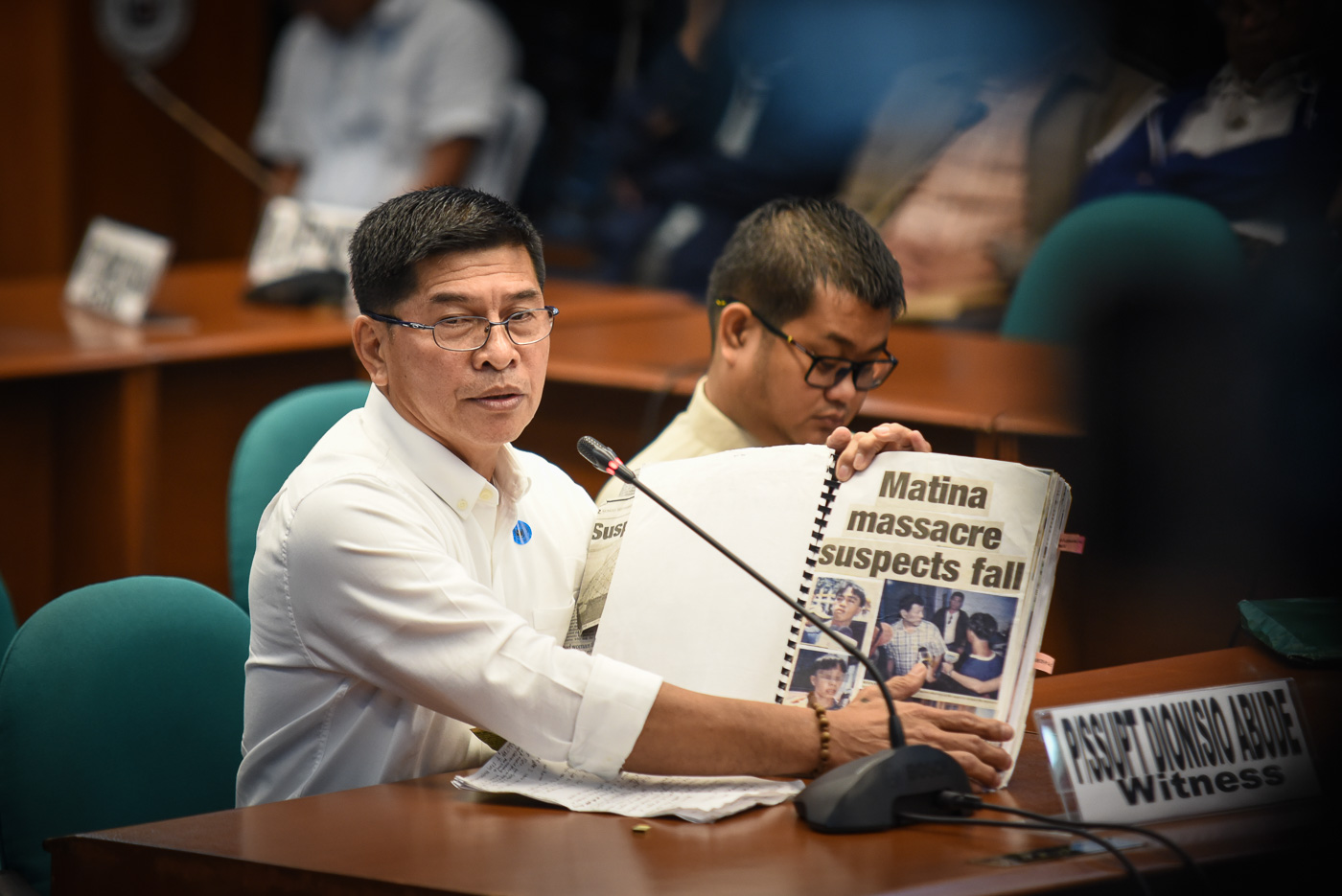 AT THE SENATE. Retired Senior Superintendent Dionisio Abude, formerly of the Davao City Police, is among the first witnesses to testify during the Senate hearing on extrajudicial killings, October 3, 2016.

The "Davao Death Squad" is an alleged loose group of vigilantes that target rapists, thieves, alleged terrorists, and at times, according to Matobato, personal and political enemies of the former Davao City mayor and his son. Duterte has long been linked to the supposed death squad but no charges have ever been filed against him.

Matobato's testimony – before a Senate committee probing the rise of killings in Duterte's "war on drugs" – is the first time a supposed witness came forward and revealed his identity while detailing the alleged activities of the "Davao Death Squad." The supposed former militia man said that Duterte himself (or through his supposed aides) ordered the killing of suspects and enemies, including political ones.

The death squad, he claimed, was composed of former militia men, commissioned and non-commissioned police officials, and rebel returnees or former communist fighters.

On Monday, October 3, for the first time since his supposed escape from Davao in 2014, Matobato will again see his supposed former comrades in the death squad.

In a privilege speech after her ouster from the Senate committee that had called for the probe, Senator Leila de Lima narrated the names of police personnel and civilians who supposedly made up the "Davao Death Squad." Some of them were supposedly under the Davao City Police Office's Heinous Crime Division.

Their names are as follows:

Sixteen of the police personnel – both active and retired – were present at the Senate on Monday for the hearing. Of the 16, 4 are already retired, according to Davao Region police director Chief Superintendent Manuel Gaerlan.

Senators with different affiliations – allies and critics of Duterte – had a quick debate over the "nomenclature" of the witnesses from Davao City. Senator Alan Peter Cayetano, among Duterte's fiercest allies in the Senate, said the witnesses should not be termed as members, or alleged members of the so-called "Davao Death Squad" since nothing had been proven yet.

Among the first witnesses of the Monday hearing was Superintendent Dionisio Abude, former chief of the Davao City Police’s Heinous Crime Division, which Matobato claimed was created to house alleged hitmen of the death squad.

Abude denied Matobato's allegations, narrating the division's achievements in the years he headed it.