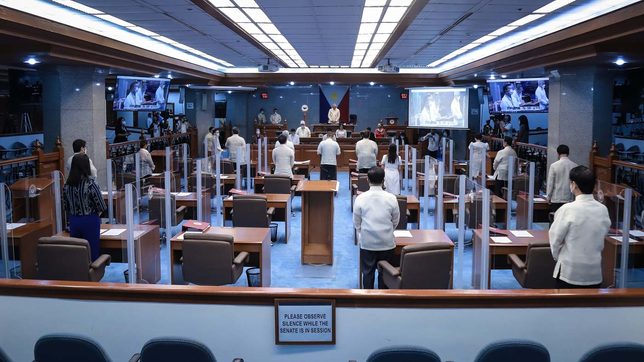 Opening prayer: Senators bow their heads in prayer during the opening of the 2nd Regular Session of the 18th Congress Monday, July 27, 2020. Some senators to be led by Senate President Vicente Sotto III will proceed to the House of Representatives in the afternoon to hear the President’s 5th State of the Nation Address in a hybrid joint session. (Henzberg Austria/Senate PRIB)

Facebook Twitter Copy URL
Copied
Some senators find the P140 billion 'standby fund' too small, and are counting on succeeding measures to allocate much bigger funding

The Senate on Tuesday, July 28, passed on 3rd and final reading its version of a bill that extended the validity of special powers granted to President Rodrigo Duterte in response to the coronavirus pandemic.

In its first plenary session after Duterte’s State of the Nation Address, the Senate approved Senate Bill 1564 or the Bayanihan to Recover as One Act. It was dubbed “Bayanihan 2,” as it supplemented the first Bayanihan to Heal as One Act, which was enacted on March 25.

The Bayanihan 2 bill retained until September 30 the 30 special powers Congress granted Duterte through the first Bayanihan law, which lapsed on June 5. Bayanihan 2 also allotted P140 billion as a “standby fund” for the government’s pandemic response and economic recovery efforts.

Below is a breakdown of the measure’s major allocations:

Besides these, Bayanihan 2 also provides P3 billion for assistance to state universities and colleges, specifically for the development of “smart campuses” to implement flexible learning methods.

The Technical Education and Skills Development Authority will receive P1 billion for its “training for work” scholarship program, and its “special training for employment” program for displaced workers and OFWs.

“Clearly, compared to all other countries in the region save for Indonesia whose population is nearly 3 times larger than ours, we have failed to stop the spread of the disease and have been unable to meet our own imposed targets and deadlines for mass testing, contact tracing, and isolation,” Pangilinan said, explaining his vote.

The opposition senator criticized Health Secretary Francisco Duque III, saying, “his incompetence and, worse, his being linked to corruption have been condoned and left unpunished.”

“We vote ‘no’ to additional funding specified in the Bayanihan 2 because we believe that Secretary Duque ought to be fired before billions more are allowed to be released to the DOH,” Pangilinan said.

The other senators expressed reservations even as they voted to approve the measure. They said P140 billion was too small to address the pandemic nationwide.

The amount is what the government regularly spends within 13 days, Senate President Pro Tempore Ralph Recto pointed out. He said the Executive should ask for more funds if necessary.

Recto and Senator Imee Marcos looked ahead to the upcoming budget season to allocate more funds for the government’s pandemic response.

Senator Richard Gordon, also chair of the Philippine Red Cross, said the measure is essentially a “best efforts bill.” He noted that rapid tests for the coronavirus are unreliable, and said the government is better off spending for RT-PCR or swab test kits, which are more reliable even if they are more expensive.

The push-and-pull between the lawmakers and the Department of Finance (DOF) when crafting Bayanihan 2 centered on the availability of government revenue. Lawmakers from the Senate and the House of Representatives wanted a much larger amount for the government’s pandemic response, but the DOF could only commit P130 billion at the time.

The Senate would have passed Bayanihan 2 before it adjourned its previous session on June 4 if Duterte had certified the measure as urgent. The chamber had then just passed the bill on 2nd reading, and it needed that certification from the President to waive the mandatory 3-day interval between the 2nd and 3rd readings of a bill.

Malacañang did not call on Congress to hold special sessions while both chambers were on recess either, so Bayanihan 2 had to wait for regular sessions to resume.

Senate President Vicente Sotto III said in a media interview that the Senate would prioritize measures to soften the pandemic’s blow on the economy – specifically recovery and stimulus packages for industries and government-controlled corporations.

In the case of the more immediate Bayanihan 2 bill, the Senate and the House differ on the standby fund – the House allotted P162 billion in its version of the measure.

Sotto said the chambers would finalize the amount at the bicameral conference, as soon as the House passes its version of the bill. – Rappler.com