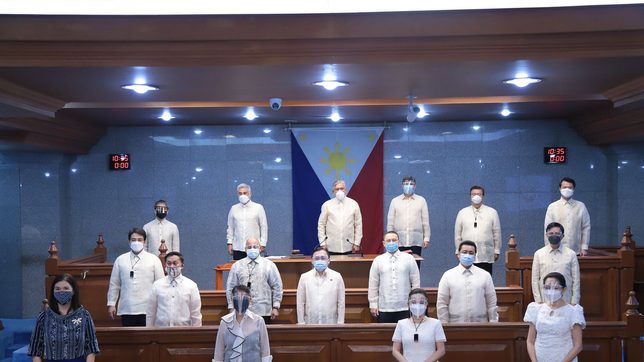 Senators arrive for the opening of the 2nd Regular Session of the 18th Congress Monday, July 27, 2020. Photo from Senate PRIB

Softening the coronavirus pandemic’s economic impact, and legislative probes of controversies involving the state health insurer and the national penitentiary were the Senate’s top priorities as it resumed its regular session on Monday morning, July 27.

Nearly all of the senators were either physically or virtually present at the opening session. Only Senator Leila de Lima was absent – she is still detained over illegal drug charges.

In his opening address, Senate President Vicente Sotto III said the chamber’s lawmaking will immediately focus on the following:

Because of the need for social distancing, the pandemic has made society even more dependent on internet access. The Senate must craft laws “to upgrade and improve the digital highway in support of various communication and online transactional needs,” Sotto said.

The Senate must support programs to “help the education sector migrate to more plausible learning platforms” so that young people are not neglected or deprived of opportunities to study.

Sotto said “safe, efficient, and dependable” public transport is “imperative” in reviving the economy reeling from the pandemic.

“Government can help entrepreneurs find their place in the emerging business landscape by reassessing tariffs so as to ease business burdens…as well as providing means for new ventures to flourish,” the senator said.

Support for the arts

“We must rebuild our nation in both body and soul,” said Sotto, citing the importance of writers, poets, and artists in helping society come to grips with what the world is experiencing.

On Friday, July 24, Sotto said the Senate would immediately pass on 3rd and final reading the Bayanihan to Recover as One Act or “Bayanihan 2.” The measure extends the validity of 30 special powers granted President Rodrigo Duterte up to September 30. The original Bayanihan law lapsed on June 5, when Congress adjourned its previous session.

On Monday, however, the bill’s passage was not on the agenda of the brief opening session. Senate Majority Leader Juan Miguel Zubiri said Bayanihan 2 would be passed on 3rd reading on Tuesday, July 28, instead.

Bayanihan 2 allots P140 billion as a “standby fund” for government efforts to address the health crisis and its adverse economic impact.

In a virtual media briefing following the morning session, Sotto mentioned the Accelerated Recovery and Investments Stimulus for the Economy of the Philippines (ARISE Philippines) bill, which the House of Representatives already passed. It earmarks P1.3 trillion in assistance and subsidies to industries, and infrastructure projects to generate jobs.

Sotto said the Senate will tackle measures like ARISE Philippines after passing Bayanihan 2, and he expects laws on economic recovery to be passed by August.

Charter change – an item the House is already discussing – is not a priority of the Senate, Sotto said, adding there is “no push” for it from the other senators.

“Is there anything lacking in the Local Government Code that requires changes in the Constitution? Right now, I don’t see the connection, I’m sorry,” the Senate president said, addressing charter change proponents  who argued for local governments’ increased access to state revenue sources as a way to help them address the pandemic.

On Monday, Sotto and Senator Panfilo Lacson officially filed a resolution to convene the Senate Committee of the Whole to investigate corruption allegations involving the Philippine Health Insurance Corporation (PhilHealth).

Late last week, PhilHealth anti-fraud legal officer Thorrsson Montes Keith resigned, citing “widespread corruption” in the agency among his reasons. Lacson said PhilHealth has questionable transactions amounting to about P1 billion. The senator then announced he would call for an investigation “in aid of legislation.”

Sotto said the Senate would summon 3 or 4 witnesses besides Keith when it opens the probe, likely on Monday, August 3. The inquiry’s main objective would be to reassess the law that created the agency and update it to prevent further anomalies, he added. However, it would also seek to exact accountability for offenses and, if corruption is proven, recommend indictments of guilty officials.

PhilHealth president Ricardo Morales, a retired military general, has come under fire because of the mess. He was appointed in August 2019 following a similar investigation of alleged corruption in the agency.

Sebastian was the main witness in the drug cases against De Lima, who has insisted her prosecution is part of Duterte’s retaliation for her investigation into his violent war on drugs.

In media briefings last week, Gordon said he found the reported deaths and subsequent cremations of the prisoners suspicious because they appeared to have been done in haste, ignoring certain protocols.

Gordon said speculations that the reported deaths might have been a ruse to let the prisoners escape could not be helped.

Sotto said he expects Gordon to begin his committee’s investigation this week or next.

Monday’s morning session ended in less than an hour, as the senators prepared to attend Duterte’s 5th State of the Nation Address in the afternoon. – Rappler.com