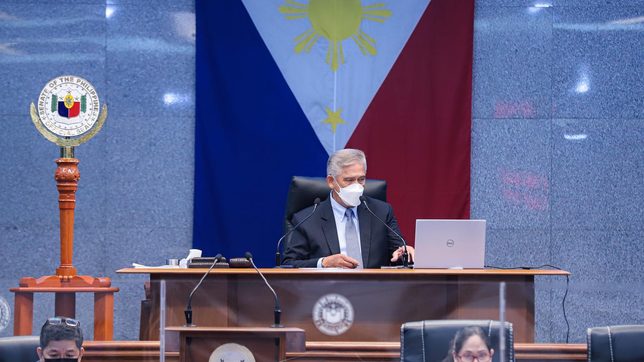 Facebook Twitter Copy URL
Copied
Senators, Senate staff, and even visiting Hungarian lawmakers are among those who got exposed to Defense Secretary Delfin Lorenzana

The Senate is suspending its plenary deliberations on the proposed P5.024-trillion budget for 2022 after senators and employees got exposed to Defense Secretary Delfin Lorenzana, who tested positive for the coronavirus.

Senate President Vicente Sotto III said the chamber will just finish interpellations on the agencies scheduled for Wednesday night, November 17 – the same day Lorenzana informed them about his COVID-19 infection – then suspend deliberations until Monday, November 22.

The Senate was initially targeting to complete the deliberations on Thursday, November 18.

The Department of National Defense chief was physically present at the Senate headquarters in Pasay City on Tuesday, November 16, during the deliberations on his agency’s proposed funds for 2022.

“We were informed today. To play safe, we will suspend budget deliberations until all those who were exposed to him yesterday will have an RT-PCR test by Saturday or Sunday. Then we resume on Monday,” said Sotto in a Viber message.

The Senate premises will be disinfected for now.

Senators and Senate staff were not the only ones who were exposed to Lorenzana. Other government and military officials were also present in the session hall on Tuesday.

Several members of the Hungarian Parliament were exposed to Lorenzana as well, as the foreign lawmakers visited their Filipino counterparts.

Senate Majority Leader Juan Miguel Zubiri, who is a COVID-19 survivor, is hoping no one else would get infected.

(But you know what’s the big problem here?? Even the Hungarian delegation had been exposed!! Oh no! I hope no one else tests positive.)

This is the second time Lorenzana contracted the coronavirus. He first tested positive in April.