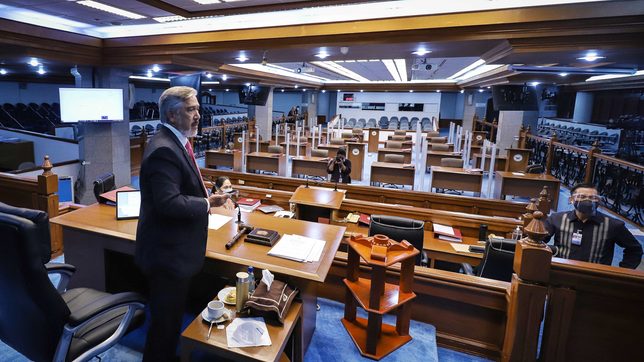 Photo from the Senate of the Philippines

Facebook Twitter Copy URL
Copied
Senators cite legislative powers, but are non-committal over whether the hearing will look into the Presidential Security Guard’s use of unauthorized COVID-19 shots

Despite threats from the Chief Executive, Senators are poised to launch a hearing into the Duterte government’s readiness to mount a COVID-19 vaccine program, citing constitutional duties that allow them to investigate the critical health campaign.

Lawmakers in the upper chamber agreed on this much – saying details of what a mass immunization program might entail, and how far concerned officials have prepared for the unprecedented effort were among topics that should be tackled when it convenes into a Committee of the Whole on Monday, January 11.

But whether the hearing will breach beyond these and question the use of unregistered vaccines by President Rodrigo Duterte’s security detail remains uncertain as Senators were split on the scope the investigation should take.

Chances the searing issue would be tackled were made all the more unlikely after President Rodrigo Duterte barred the Presidential Security Group (PSG) from cooperating in a congressional hearing.

Duterte on Monday night, January 4, warned lawmakers of a potential “crisis” should they summon his security detail to divulge information on the unregulated vaccine efforts which he himself first revealed.

“I might just decide to not allow them to – to ignore your summons. So you choose. It’s bad for you, sorry, I don’t care. It’s bad for the country, maybe,” the Chief Executive said in a recorded address. 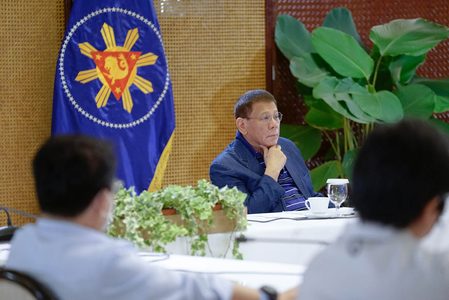 Hours after Duterte made the remarks, Senate President Vicente Sotto III, who will preside over the hearing next week, said the President must have been “misinformed” since he was not inclined to invite the PSG to the investigation.

“The topic of my hearing is the roadmap for the P72.5 billion for vaccines. Who in heaven’s name told him I’m calling for the PSG? I think the President is being misled,” Sotto told reporters on Tuesday, January 5.

Senator Panfilo Lacson echoed Sotto’s position, saying the focus of the Senate’s probe should be on the government’s efforts to procure COVID-19 vaccines for Filipinos.

He tweeted, “It is awful that the Senate hearing wants to focus on investigating the PSG personnel who allowed themselves to be inoculated instead of asking why we have no vaccines yet, unlike many other countries. Let’s ask again – who dropped the ball?” (READ: Why did the Duterte gov’t take months to sign a vaccine deal with Pfizer?)

But while this was his preference, Lacson said issues related to vaccination efforts against the virus should not be ignored and that Congress had the power to invite resource persons who would aid the purpose of the hearing.

(For me, the immunization of 110 million Filipinos is more important than focusing on several PSG personnel… But this does not mean that we forget other related issues. We won’t brush aside issues that are truly related to the foremost issue.)

In a statement, Senate Minority Leader Franklin Drilon said while Duterte can invoke executive privilege to prevent the PSG from appearing in a hearing, lawmakers should still investigate the unregulated use of illegal vaccines in the country.

Drilon said this was necessary to cover gaps in the Food and Drug Administration Act and strengthen the Bureau of Customs to prevent similar situations in the future.

Senator Francis Pangilinan said while it was up to senators to decide on whether they will tackle the PSG’s early immunization, lawmakers had the “responsibility” to probe the readiness of the Duterte government to deliver COVID-19 vaccines to Filipinos.

The Senate earlier adopted Pangilinan’s resolution for the Senate to convene into a Committee of the Whole to look into the Duterte government’s vaccination program.

(If the different agencies of the Executive branch are not yet ready and are going their own ways in different directions, it is the responsibility of the Senate under the Constitution to serve as a check and balance and investigate this.)

The opposition senator said if the PSG’s vaccination efforts were an indication of uncoordinated efforts and a messy rollout, it was important to determine its implications on the government’s plans to ensure a smooth and effective rollout of the scarce product.

Whether or not the PSG will attend the Senate’s hearing, Hontiveros said the implications of unregulated vaccination activities were clear.

“If as early as now the government cannot control unverified and possibly life-threatening vaccines from entering the market, people’s trust in any COVID-19 vaccine, even if officially distributed, will only go down,” she said. – Rappler.com