MANILA, Philippines (UPDATED) – The long battle is finally over. 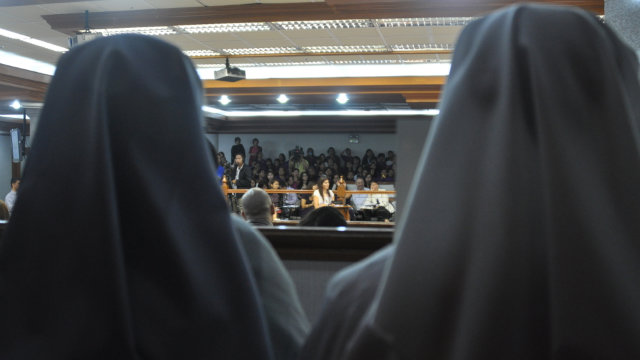 2 nuns present in the senate during the RH bill vote.

RH proponents saw the outcome ahead of time, saying the votes to reject so-called killer amendments offered a preview. Co-sponsor Santiago already expected a core group of at least 11 senators to support the bill.

The Senate’s approval comes after the bill got a boost last week with the House of Representatives passing it on 2nd reading in a close vote of 113-104-3. President Benigno Aquino III followed suit, certifying the bill urgent on Thursday, December 13.

Aquino’s certification paved the way for the Senate to vote on the RH bill both on 2nd and 3rd reading on Monday.

The House also approved the bill on 3rd reading on the same day.

Lawmakers will now reconcile the two versions in the bicameral conference committee. The bill will then be sent back to the Senate and House for ratification, before Aquino signs it into law.

The RH bill aims to make both natural and modern family planning methods like contraceptives affordable and accessible to the public.

It mandates age-appropriate sex education, and provides RH services to women and the poor, especially in rural and impoverished areas.

Catholic bishops strongly oppose the bill, saying it will promote a “contraceptive mentality” and lead to the legalization of abortion.

Sotto: No to ‘satisfying sex,’ WHO in bill

The Majority Leader said, “I believe reproductive health in the context of a true Filipino does not pertain to ‘safe, satisfying sex’ but family, marriage and responsible parenthood.”

The female senators pointed out women should not be deprived of their right to satisfying sex. Legarda said even among married couples, some women are forced to have sex and experience pain.

Santiago said, “I am a Filipina. I’m also a married woman and I insist whoever is married to me to give me safe and satisfying sex, period.”

Sotto was eventually declared out of order because the amendment was already tackled previously.

The Majority Leader also wanted to remove the World Health Organization in the list of bodies that will declare family planning methods as safe. Sotto said only the Philippine Food and Drug Administration (FDA) should have the task to avoid foreign imposition on Philippine laws.

Cayetano accepted Sotto’s amendment subject to this change by Sen Franklin Drilon: “The state will provide information and access without bias to all methods of family planning … such as those
registered and approved by the FDA.”

Enrile and Sotto have described the RH bill as the most sensitive and divisive legislation in the Philippines.

The two leaders have argued against the measure, saying it will harm women and the unborn, and put at risk the nation’s young and growing population. There are now about 100 million Filipinos.

Enrile said in a press conference last month, “Our biggest export is OFWs (Overseas Filipino Workers). That is export. That’s why I’m against RH.”

Yet even before the voting on Monday, Enrile already conceded defeat.
He told radio dzBB on Sunday, December 16, “My reading is that the
pro-RH has the numbers. It looks like [it will be passed].”

The Senate President reiterated his statement that if the bill becomes
law, he might eventually question it before the Supreme Court. Enrile
believes the bill is unconstitutional, violating the provision
protecting mothers and the unborn.

“I will have to respect the position [of the Senate] as part of the
institution that approved it but I can raise an issue against it [when
my term ends].”

Sotto said if the bill becomes law, Filipinos will realize that it was
just a waste of money.

Ahead of the vote, Presidential Spokesperson Edwin Lacierda hailed the moment as historic.

“Many administrations have tried to come up with a bill on responsible
parenthood. This is the first time that we will see if the 3rd reading
vote [in the House] will ratify the second reading vote of a bill that
will see to make policies, a measure that will break the status quo,”
Lacierda said in a press briefing on Monday.

He added, “That we have a chance to help uplift the situation of the
poor by making a policy of an informed choice when it comes to
determining the size and what method of family planning [to] use.”

In contrast, the Catholic Bishops Conference of the Philippines’
(CBCP) called on lawmakers over the weekend not to vote for the bill.

“The youth are being made to believe that sex before marriage is
acceptable provided you know how to avoid pregnancy. Is this moral?
Those who corrupt the minds of children will invoke the divine wrath
on themselves,” the CBCP said.

In an exclusive interview with Rappler, Manila Archbishop Luis Antonio
Cardinal Tagle appealed to Congress to consider the bill’s effect on
Filipino culture and the youth.

“Long after we are gone, we will leave behind not just a law but a
whole mentality and a whole culture,” Tagle warned. – Rappler.com